If you’re planning on visiting Seville during the winter months, then you’re in for an absolute treat. The festive season is a big deal for the Spanish, and they know how to do it well.

If you’re heading to the Andalucian capital then expect to see some of the best light displays in the region, even boasting the biggest Christmas tree in Europe, during the 2021 festivities.

To help you with your plan to spend Christmas in Seville, this article will tell you everything you need to know about where to go to see the best Christmas lights and how to make the most of the season.

What to expect in Seville in December 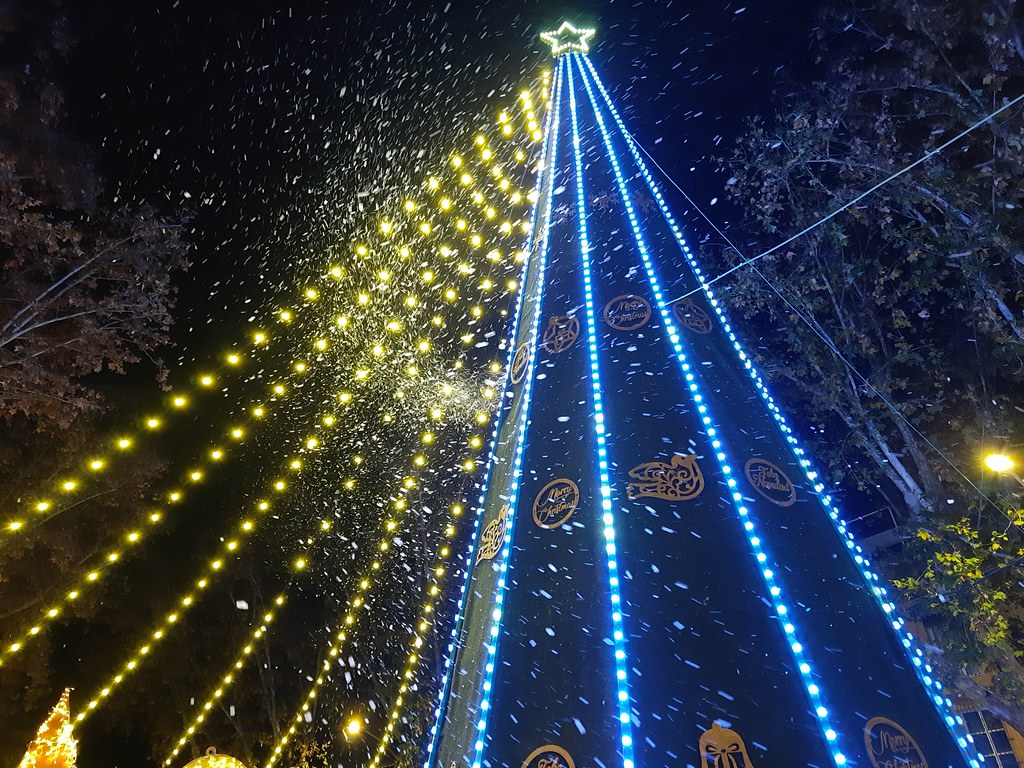 In Seville, the Christmas lights get switched on at the end of November, so if you’re visiting Seville in December, you will have missed the big switch-on date. If you are around during this time, then expect it to be busy. The Christmas light switch on is always an exciting affair bringing locals and visitors to the city in their masses.

One thing you’ll notice during Christmas in Seville is the pop up musicians, especially during the Christmas week. These impromptu, pop-up concerts happen in the historical centre and around the streets feeding off from here. The groups move from plaza to plaza singing traditional holiday songs called villancicos.

In terms of accommodation, expect to pay more than average for a place to stay across the whole month of December and until after the 6h January. Also, book everything in advance, this goes for attractions as well as restaurants. Crowds are at their peak for the whole month, so expect queues everywhere.

The weather in Seville in winter can be changeable. True, it can rain, but this isn’t common. The air temperature can be chilly, however, in the sunshine, it can be glorious and can reach 20 degrees. At night time it can drop to single figures. It’s recommended to wear layers of clothing to combat the temperature change, especially if you plan to be out for the whole day. 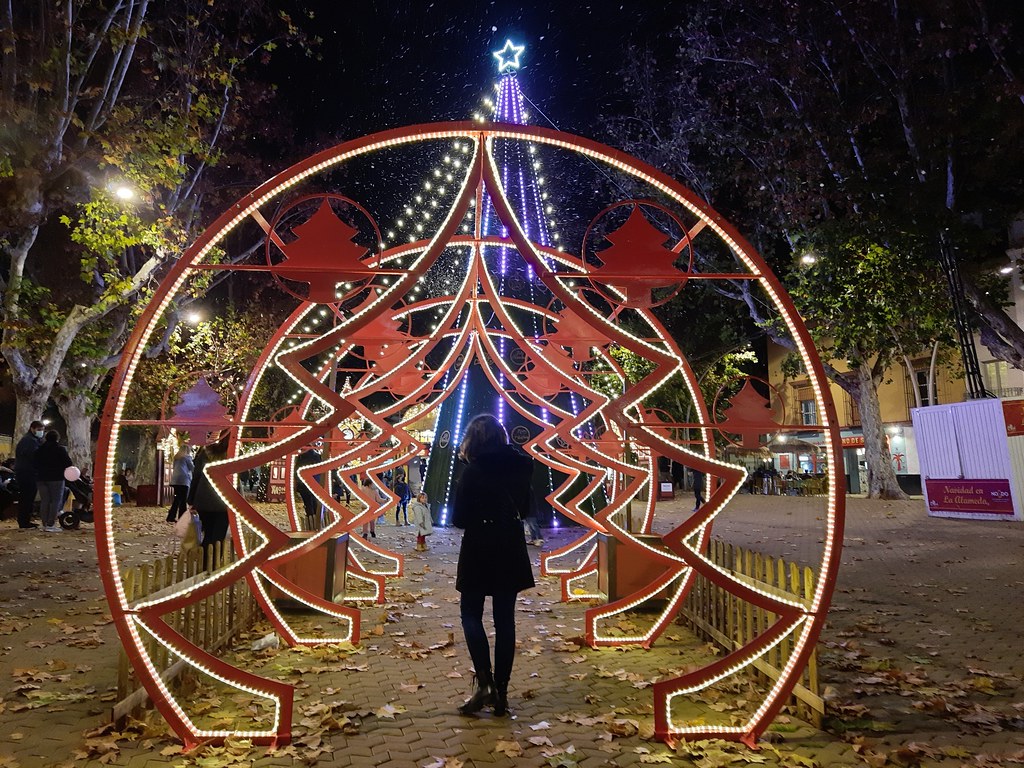 Seville hosts their own version of the traditional Christmas market and these start to pop up towards the end of November (often to coincide with the light switch on date). The main areas you’ll find Christmas Markets are along Avenue de la Constitucion leading up to Fray Ceferino González and also on Plaza Nueva. You’ll find a smaller cluster of Christmas markets near Metropol Parasol and Alameda de Hercules too.

They all have similar offerings, typically small nativity figures, hand made trinkets, candied nuts and Turrón (a traditional Spanish confectionery). The prettiest Seville Christmas market is the one along Avenue de la Constitucion with the backdrop of the Cathedral.

One of the most popular markets early in the festive season is the Feria del Belén de Sevilla, (the fair of Bethlehem) which takes place near the Archivo de Indias in the historical centre. This is the place to buy everything you need to make your own nativity scene – which you’ll read later on, is a very popular tradition in Spain. 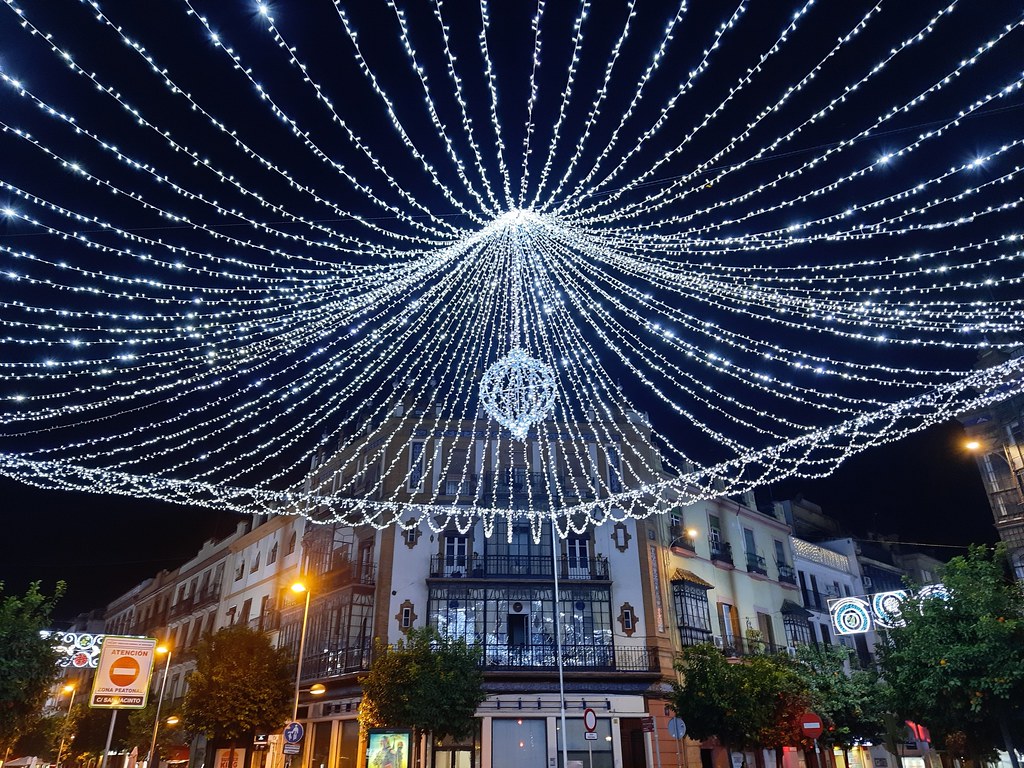 One of the highlights of spending Christmas in the city is that you’ll see the Seville Christmas lights adorning all of the picturesque streets. Typically, over 100 streets around Seville will be lit up in some way. Although you’ll find Christmas lights all over the city, the best ones are closer to the historical centre, in the plazas surrounding Seville Cathedral, Avenue de la Constitucion, the shopping streets and around Metropol Parasol. The mini Christmas village display at Alameda de Hercules is also another great place to see Christmas lights in Seville,

You’ll find gigantic trees too, although here, they are cone-shaped structures, rather than real-life fir trees. These trees are decorated with thousands of little lights and pop up in several places all over the city. The three more notable Christmas trees in Seville are the ones are found at Alameda de Hercules (which in 2021 also pumped out artificial snow), Puerta Jerez and Plaza de San Francisco (which in 2021 also featured a light and dance show).

The tree in front of the city hall on Plaza de San Francisco was said to be the largest tree in Europe during the 2021 festivities. The display is different each year, such as the 2019 display where 8 giant angels, lit up a path leading to the Christmas tree. The 2021 offering was covered in thousands of LEDs, which were programmed to form an animated sequence, images of the gingerbread man, fireworks, and snowmen performed to Christmas music and attracted thousands of people to see the nightly shows, which ran from about 6.30 pm until late.

Although it skipped a year in 2021, Seville’s answer to Lapland can usually be found under the Metropol Parasol (‘The Mushrooms’) at Plaza de la Encarnación. Here you’ll find the Christmas village which in the past has featured real Christmas trees, (artificial) snow, lights and of course, Father Christmas’s little wooden house. There is often live entertainment, sometimes musical, other times acrobatics suspended from the Parasol above.

The Nativity Scene or Belén in Seville 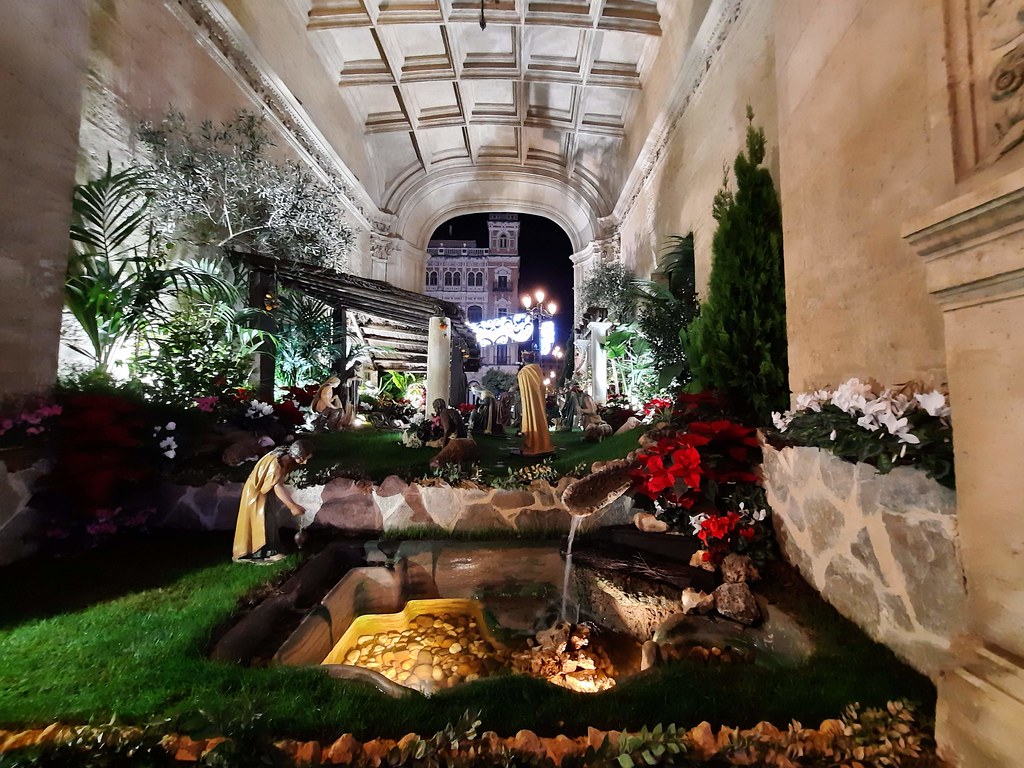 Nativity scenes, known as belén or Nacimiento are a firm favourite of locals and tourists of all ages. Belén means Bethlehem. Walking through the city, you will see that most shop window displays have miniature Beléns.

The bigger ones are at Alameda de Hercules and Ayuntamiento de Sevilla (Town Hall) on Plaza de San Francisco. You’ll also find that a significant number of churches open their doors for visitors to see their Belen display in exchange for a donation.

What happens on Christmas day in Seville? 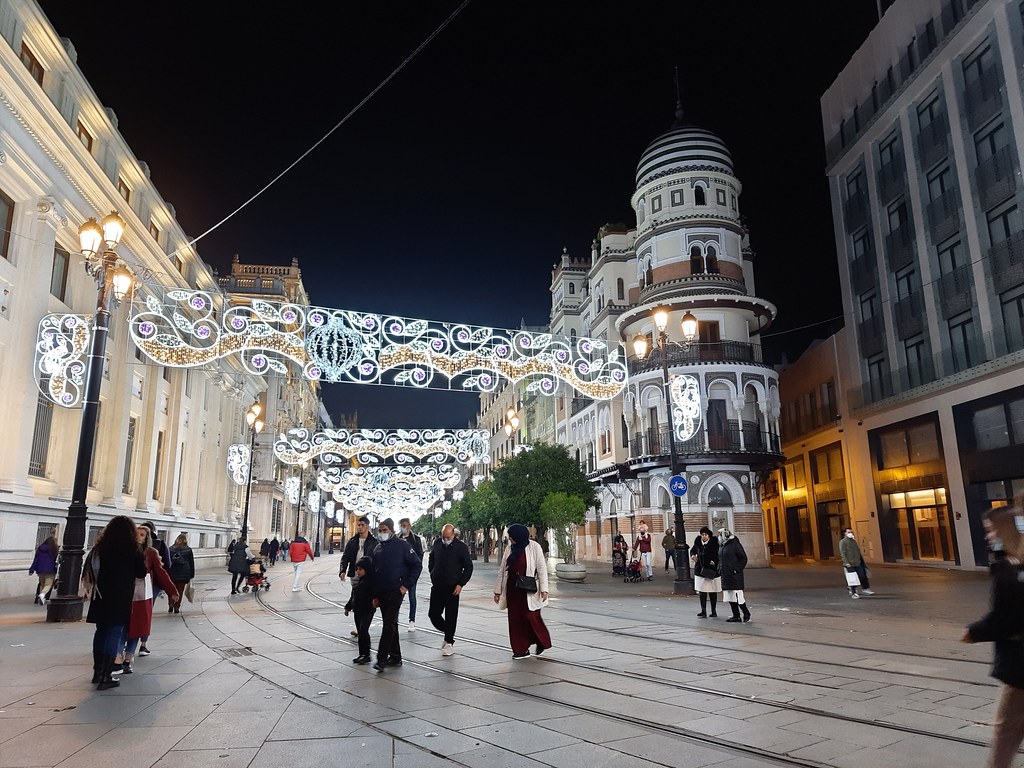 Compared to the UK, where we have our big celebration on the 25th December, Christmas day in Seville is a much more relaxed affair. The bigger celebrations are held on the afternoon and evening of the 24th of December, with church services often followed by a meal with family. This evening is called  Nochebuena (the good night).

On Christmas Eve, you’ll find that most bars and restaurants close early as this is when Spaniards eat their Christmas meal. Similarly to the UK, the Christmas meal features a stuffed turkey or chicken, although in Seville seafood is also very popular. No Spanish table would be complete without the Jamón Serrano (the traditional cured ham). You will see these giant legs of meat in most supermarkets in the lead up to Christmas.

Some bars and restaurants will be open on Christmas day although it’s a national holiday. Christmas day is typically spent with the family. You will see groups out walking around the city’s parks, relaxing and enjoying time with each other. 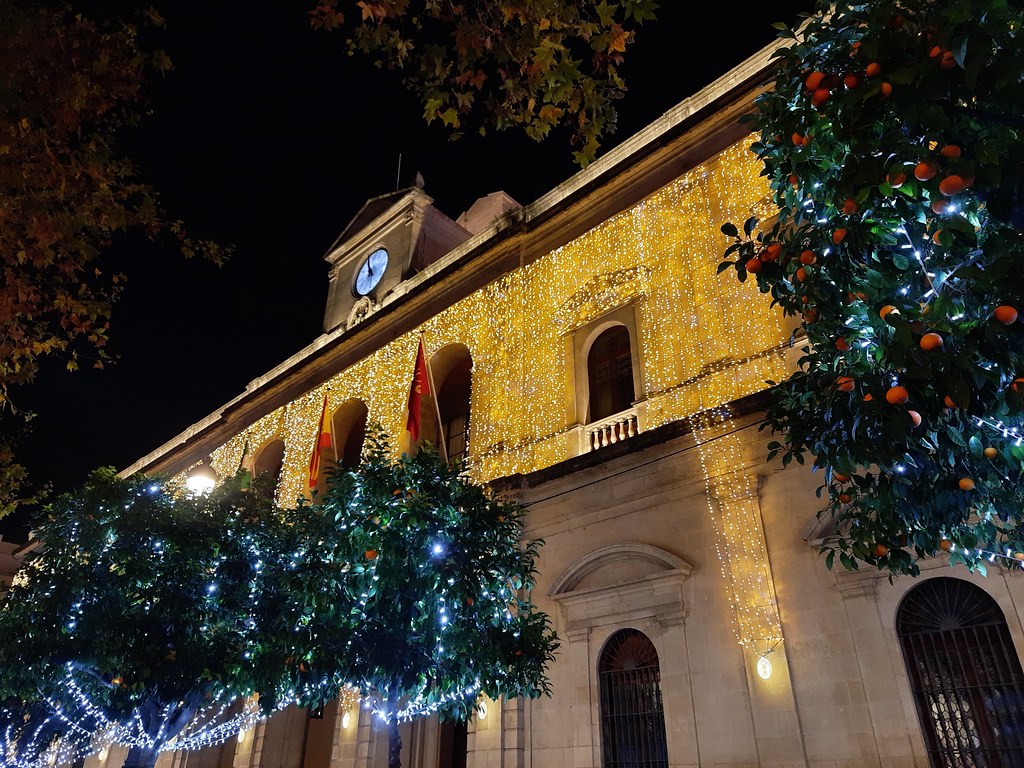 In Spain, there is an unusual tradition of eating 12 grapes on New Year.

The thinking behind this is that each grape ensures good luck for the next year, with each green grape representing a month of the year. As the clock strikes midnight, one grape is eaten with each gong of the bell. This might sound simple, but it’s easier said than done.

From the voice of experience after having done this the wrong way at first, the trick is to prepare your grapes beforehand. Choose the smallest ones, take them off the stalk, wash them and put them in a bowl. It makes it much easier to eat them quickly, without seeing in the New Year while choking on a grape. 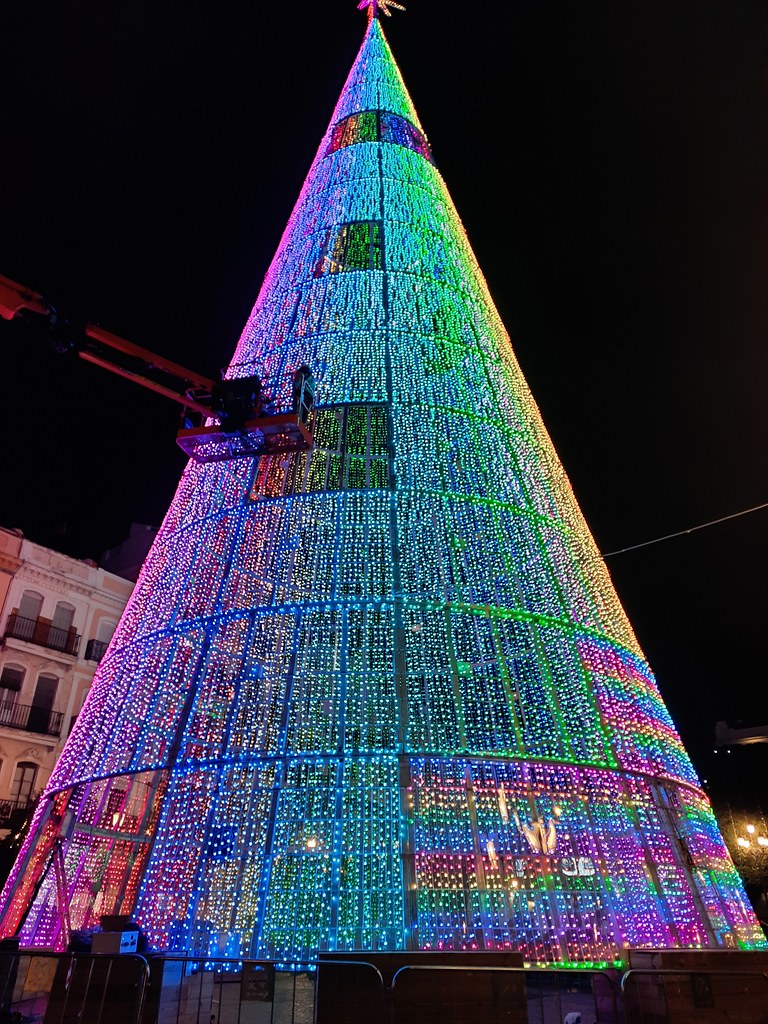 The month-long festivities continue into January. In Spain, the 6th of January is known as King’s day. The Three Kings’ Parade which takes place in the centre, happens on the 5th January in Seville where the streets of Seville are filled with floats and carriages.

Thousands of people line the streets to watch the Three Kings’ Parade which features over thirty floats making up the procession. From the colourful and garishly lit floats, performers taking the roles of the Kings, their Pages and ladies, dress in lavish costumes as sweets are thrown out to the onlookers, over ninety tons of sweeties!

The tradition of King’s day comes from the Nativity Story. The three wise men or kings followed a star while carrying gifts. The star showed them the way to see baby Jesus, where the three kings offered their gifts: gold, incense, and myrrh.

The parade represents the Kings’ arrival in the city of Seville, where the next morning, on 6 January, the King will deliver presents to the children.

To the unaware, this appears like a second Christmas day, in the sense that gifts are given to each other. The festive season is in Spain is a double whammy! 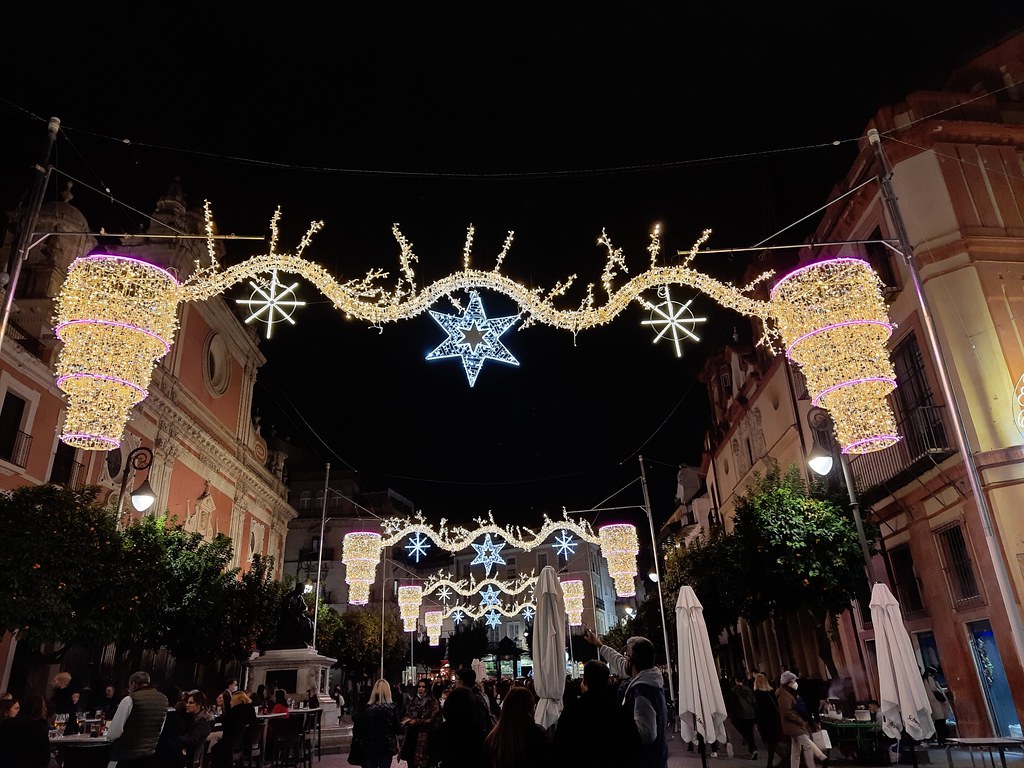 For more articles about Seville, check out our two days itinerary and our top sites to see in the city.

One thought on “How to Spend Christmas in Seville”