Easter in Seville is both a joyous and sombre celebration for locals but for a visitor it is an unforgettable experience.

The deeply religious city residents shake off the winter months and come alive to remember The Passion and death of Jesus and to celebrate His resurrection.

Semana Santa in Seville is famous throughout Spain and visitors come from all over the world to join Sevillanos in celebrating Easter. Holy Week in Seville is one of the city’s biggest festivals, followed by Feria de Abril just two weeks after Easter.

About the Holy Week in Seville 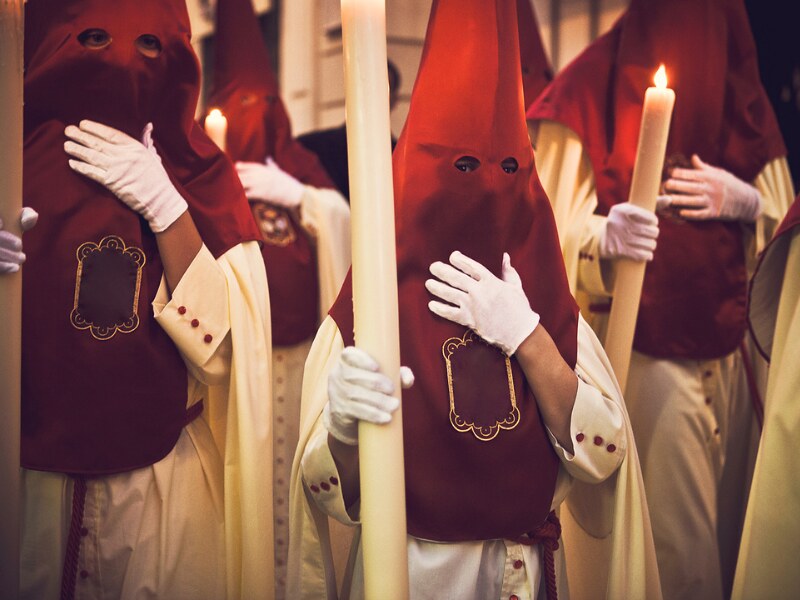 Semana Santa in Seville is celebrated in the week preceding Easter Sunday but as the exact date for Easter changes each year, so do the dates for Semana Santa. However, Holy Week usually falls between mid March and mid April.

The focus of Holy Week in Seville is the spectacular Easter Processions, also known as The Parades of the Brotherhoods. The processions start on Palm Sunday and are held every day until Easter Sunday. Most parades start in the afternoon or early evening.

Visiting Seville during the Semana Santa 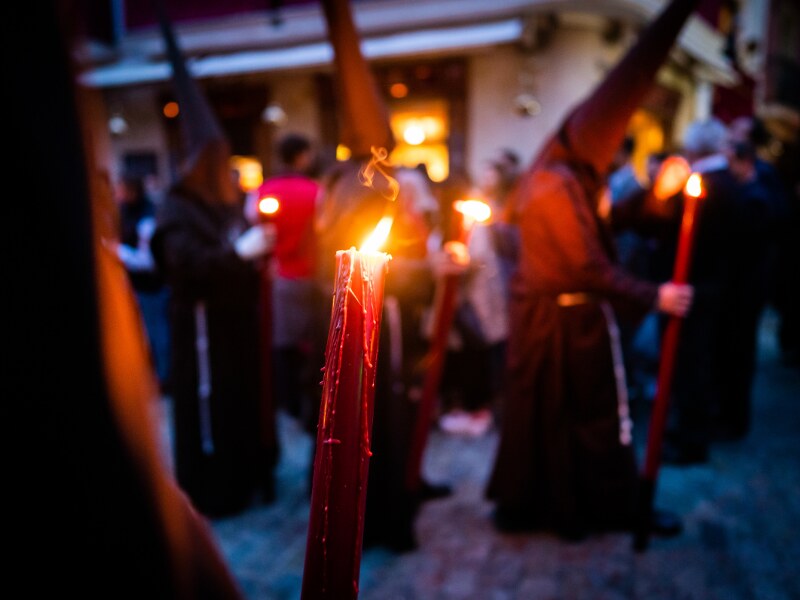 Semana Santa attracts hundreds of thousands of visitors so expect Seville to be exceptionally busy during this week. The cost of accommodation sky rockets and driving in the city is inadvisable due to the crowds. Public transport, restaurants and cafes will also be very busy.

If you plan to visit Seville in Holy Week you are guaranteed a memorable experience but it is important to remember that this is not a party festival. It is a sombre religious festival attended by thousands of worshippers and devotees.

What are Seville’s Easter Processions? 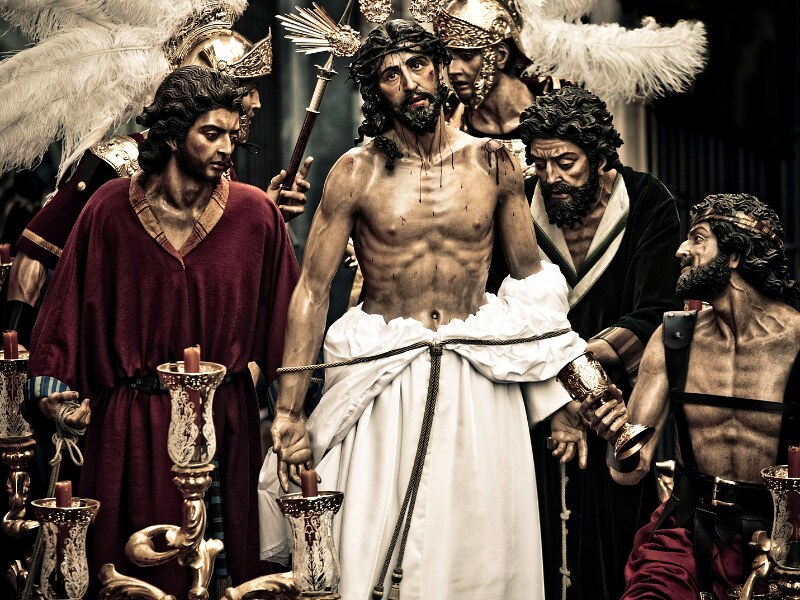 The Easter Processions are parades of religious statues through the streets of Seville by the different brotherhoods or fraternities (cofradias or hermandades) of the city. In Seville, these Easter processions date from the 16th century.

The parades are slow moving and involve thousands of people with tens of thousands more spectating. Each procession can last up to 14 hours. The parades start from the home church of the brotherhood and process to Seville Cathedral and then back again.

Seville has approximately 60 hermandades/brotherhoods and there are 58 parades during Semana Santa involving around 50,000 people.

There are up to three statues on floats (called ‘pasos’) in each parade which always feature Jesus and a story from The Passion followed by a pasos dedicated to His mother Mary.

What to Expect from Seville’s Easter Processions 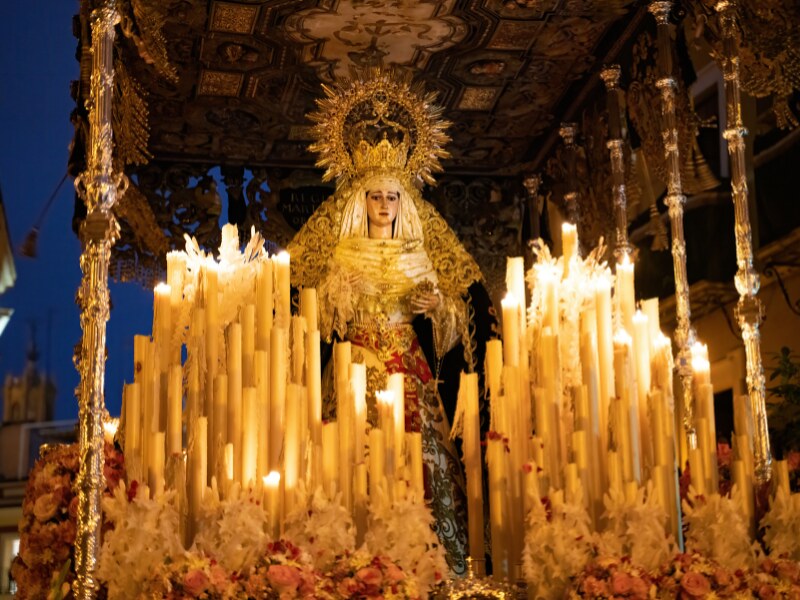 The Nazarenos are brotherhood members dressed in hooded penitential robes called capirotes. The capirotes are different colours according to the brotherhood they belong to but the general rule is the darker the colour, the more sombre the parade will be. These ‘Nazarenes’ hold large wax candles which are lit at night.

The pasos follow the Nazarenos. The floats are extremely heavy and can weigh up to 4 tons and around 40 men are needed to carry each float but there is usually a team of around 200 men who swap in and out during the procession. 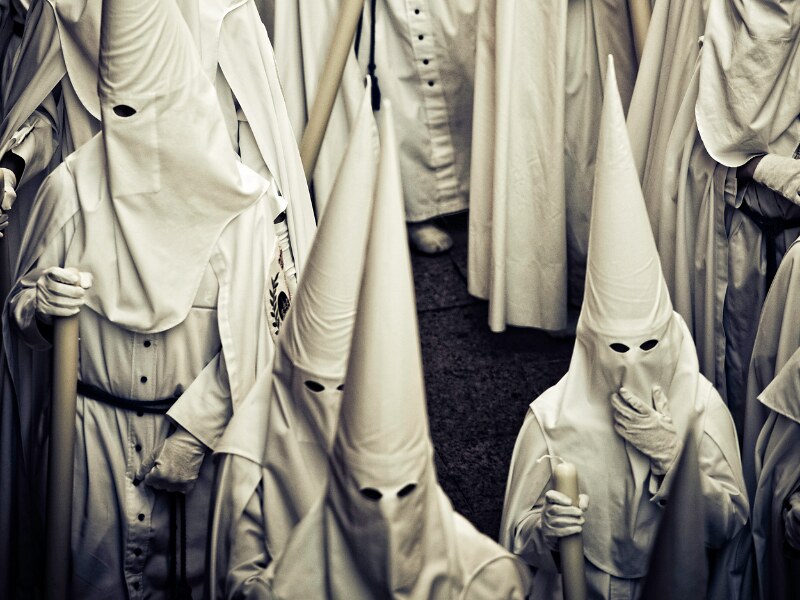 These men (called costaleros) walk hidden under a curtain and are only visible by their feet. This gives the impression that the statues are floating along the streets of Seville. To be a costalero is considered a great honour.

Moving between the various groups in the parade are ‘diputados de tramo’ or guardians who keep each group organised and in formation.

The processions are accompanied by brass bands that play religious songs during the route and who always play the Spanish national anthem as the procession leaves the home church. Along the route, members of the brotherhood, joined by onlookers, sing ‘seatas’, emotional religious songs that are often sung a capella to a silent crowd.

At the rear of the parade are women who wear traditional black dresses and a ‘mantilla’ which is a silk or lace black veil over their head and shoulders. The mantilla is secured by a high comb called a peineta.

At night, the processions are candlelit and are magnificent and atmospheric to watch.

Which are the Best Easter Processions in Seville? 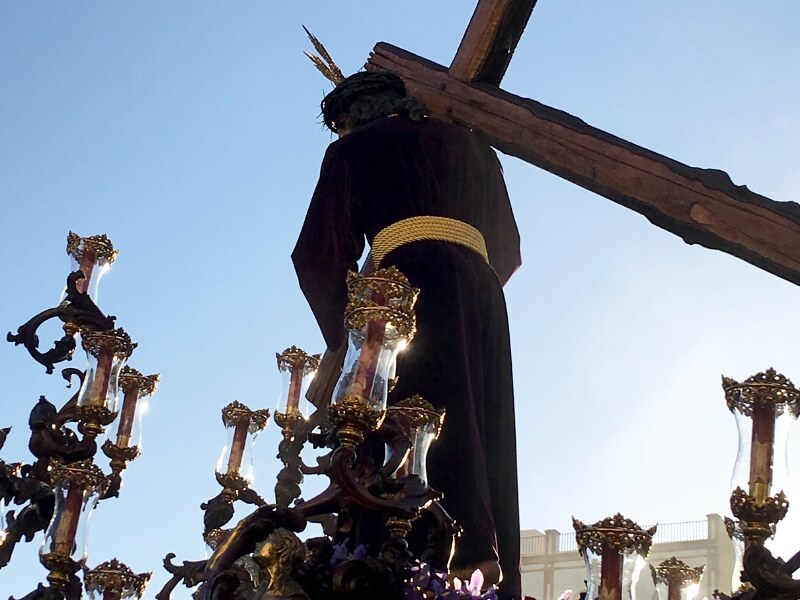 There are huge processions on each day of Holy Week with the most processions held on Palm Sunday.

Some unmissable Easter processions to witness during Semana Santa in Seville include La Paz on Palm Sunday, El Museo on Monday, San Benito on Tuesday (when the costaleros have to carry the pasos on their knees to exit and enter the Brotherhood home church) and La Sed on Wednesday.

La Madrugá (The Dawn) is one of the most special events in Holy Week in Seville. It is held on the night of Maundy Thursday through to Good Friday morning. 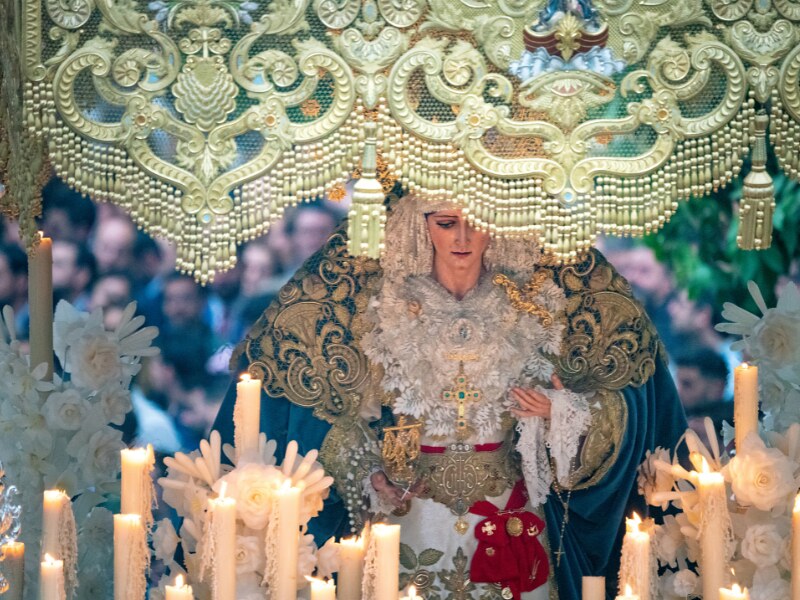 This is when the most prized and most venerated pasos process through the streets of Seville. The parades start at 1 am and continue until around midday on Good Friday.

The oldest brotherhood in Seville, the ‘Hermandad del Silencio’ starts La Madrugá processions. Street lights and shop lights are turned off and the parade moves in silence and darkness by candlelight.

La Macarena is the most popular of all the Easter Processions in Seville as it is considered to be the most joyful of all the parades.

If you still want to see more processions, you could watch Santo Entierro on Easter Saturday and El Resucitado on Easter Sunday.

Where is the Best Place to See the Easter Processions in Seville? 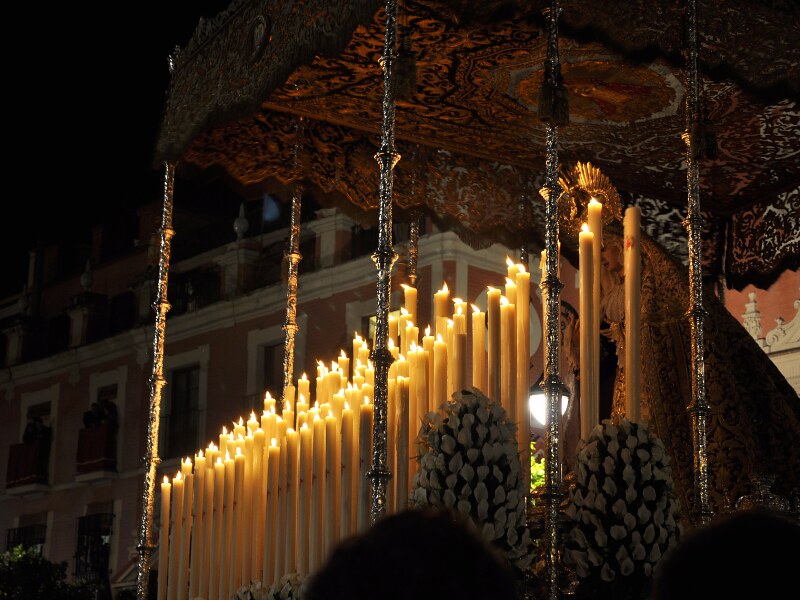 Each parade starts from the home church of the Brotherhood hosting the procession. However, no matter what the starting point may be, all the parades follow the same final route to reach Seville Cathedral.

This part of the route is known as Carrera Oficial. It starts in Campana and continues along Calle Sierpes, Plaza San Francisco, and Avenida de la Constitución before arriving at Seville Cathedral.

How to Reserve Seats for the Semana Santa Processions? 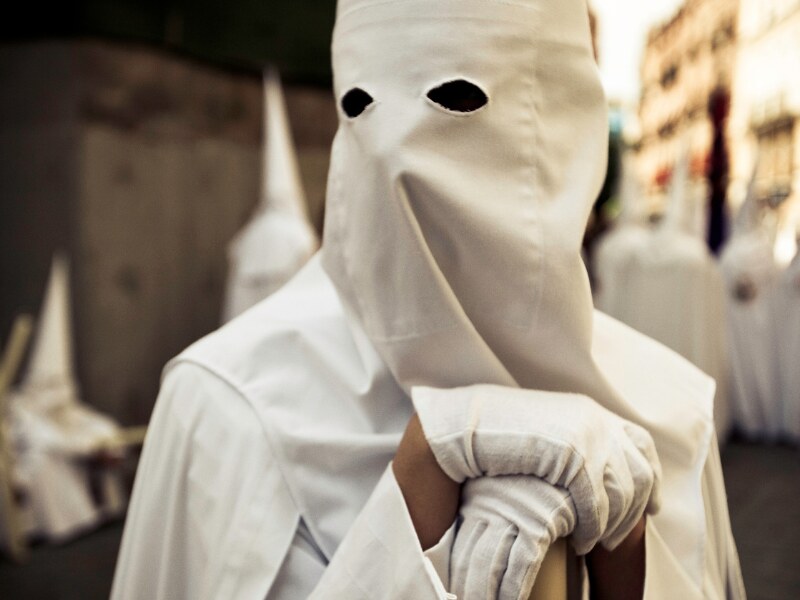 If you do not wish to reserve a seat, you can watch the processions from anywhere on the parade route before it reaches the Carrera Oficial section.

Pick up a parade brochure and map of the procession route from the Seville tourist office and follow or watch the parades on foot for free. Another option is to book a hotel room or private accommodation along the parade route but expect very high prices.

Wherever you choose to go to watch the processions, arrive early to secure your spot.

It is possible to reserve a seat in the Carrera Oficial section of the route. However, seat reservations are in huge demand and the number of seats available is dwarfed by the number of people who want seats.

General seating or seats in specially erected grandstand seats must be reserved in advance from the General Council of the Brotherhoods website. Deadlines for applications apply.

For more similar articles, check out the following: