If you’re planning on visiting the Costa del Sol during the winter months, then try to coincide your trip with the festive season, and spend Christmas in Malaga.

The festive season is a big deal for the Spanish, and they know how to do it well. There are so many things to do in Malaga at Christmas, whether you’re travelling as a family, couple or solo you’ll find loads of traditional celebrations to get involved with.

In Malaga at Christmas, you can expect to see some of the best light displays along the whole of the Costa del Sol, including the world-famous Calle Larios, which is famous for its spectacular nightly light and sound show and attracts thousands of viewers every year.

If you’re planning on spending Christmas time in Malaga, this article will tell you everything you need to know about where to go to see the best lights and how to make the most of the season.

What to Expect in Malaga in December 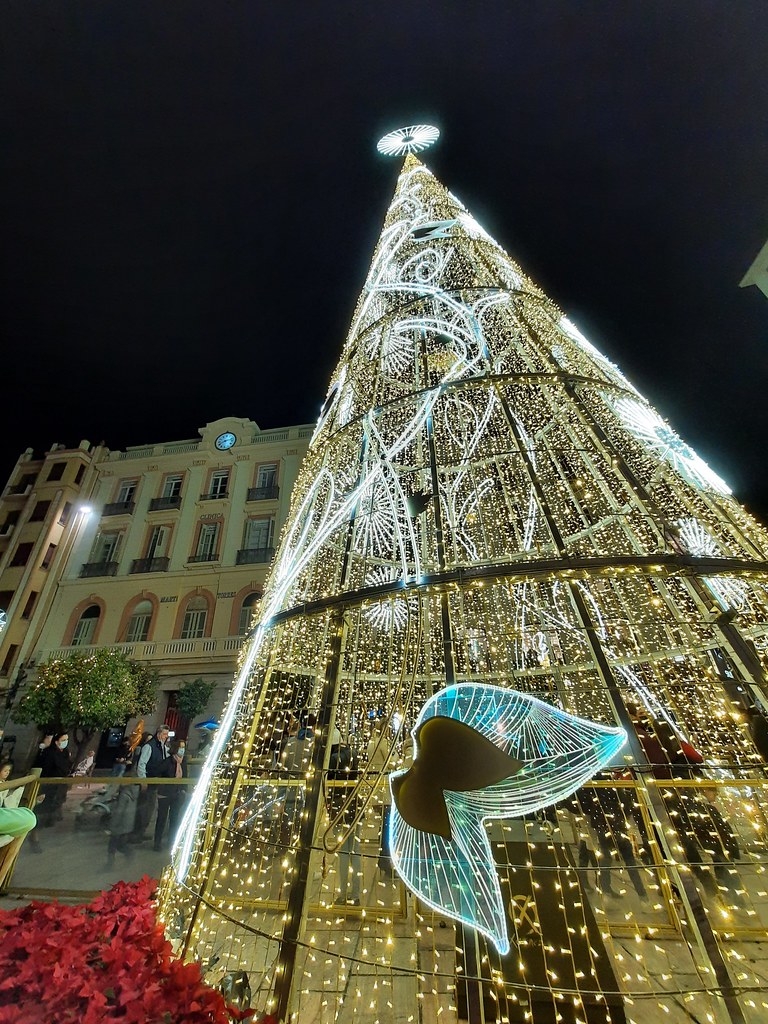 In Malaga, the switch-on date for the Christmas lights is on the last Friday of November, the illumination marks the time for the month-long festivities which happen throughout the whole of December, and into January.

The switch-on date is then followed by the opening of the Christmas Markets, which start to pop up all over the city from the first week of December. The markets stay up for the whole of the festive season until the 6th of January (Kings Day).

One thing you’ll notice during Christmas in Malaga is the number of Christmas cultural events, which range from pop up traditional musicians, carol singers in the plazas and more formal orchestral-style performances in venues such as Carmen Thyssen Museum.

Entry to the patio of the Carmen Thyssen Museum is free, however, the venue is small, so arrive early. You can listen to the local choirs singing carols during the evenings typically on Calle San Juan or Calle Nueva and Plaza de las Flores, Calle Granada, Calle Molina Lario and Plaza del Obispo. These typically happen in the week leading up to Christmas. Check with the local information centre to find out where they will be.

The annual verdiales competition has been celebrated in Malaga for over 50 years. This form of traditional music and dance originates from the villages and mountains to the east of the city. Here you’ll see around 30 groups of musicians and dancers competing for the title. The event happens in Recinto Ferial in Puerto de la Torre, just north of Malaga.

The festive season is a peak time for visitors to Malaga. So expect prices for accommodation to be at their most expensive. Also, be prepared to book reservations in advance for any of Malaga’s’ attractions as well as restaurants. In shops, anticipate queueing for everything, especially in places like El Corte Ingles!

Because of its proximity to the sea, the weather in Malaga in winter is mild (especially if you compare it to places in northern Europe). Although it’s mild, it can be changeable, so be prepared for rain. Take an umbrella or waterproof – the likelihood is that you won’t need it.

Although temperatures sit at about 17 degrees during the daytime, it can feel a lot warmer in the sun. However, in the shade and at nighttime, temperatures can be chilly, sometimes dropping to single figures. It’s best to wear layers of clothing to combat the temperature change, on the sunniest days, you would be fine in a t-shirt! Yet, you’ll swiftly want to put on a pullover in the shade, and at night especially. 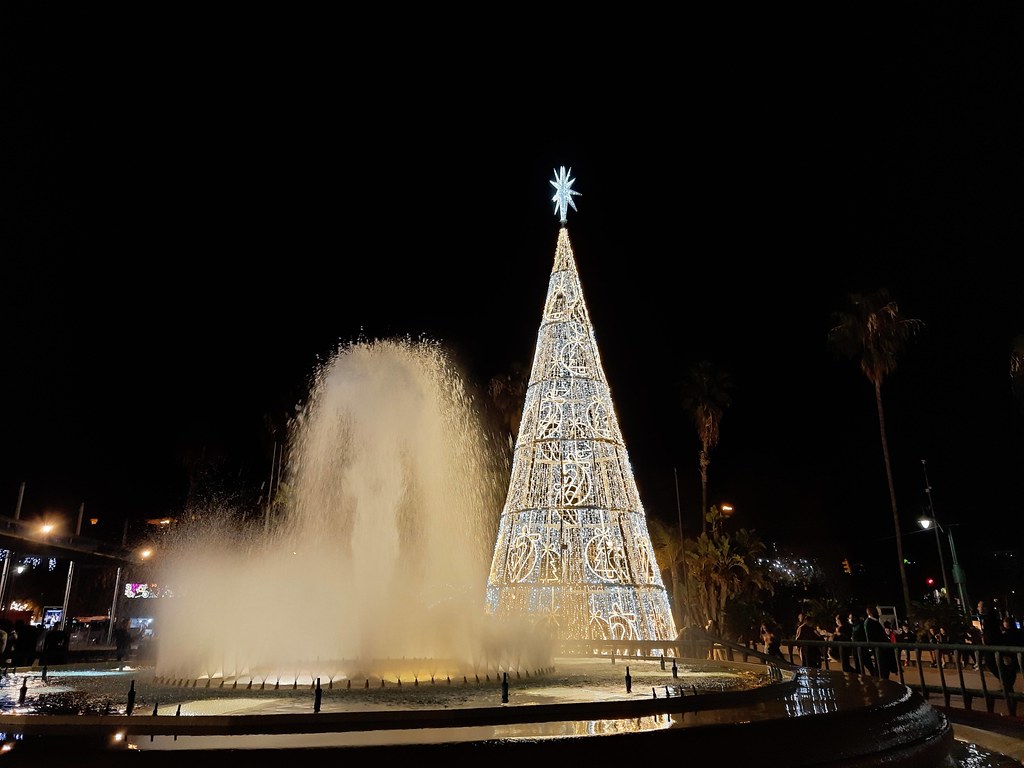 Like most European cities, Malaga hosts its own version of the traditional Christmas market. You’ll find the largest of Malaga’s Christmas Markets in Parque de Málaga, this runs (like most of them) from the start of December until January 6th. This market sells everything from Christmas decorations, hand-made products and artisan foods, so it’s a great place to buy Christmas gifts. 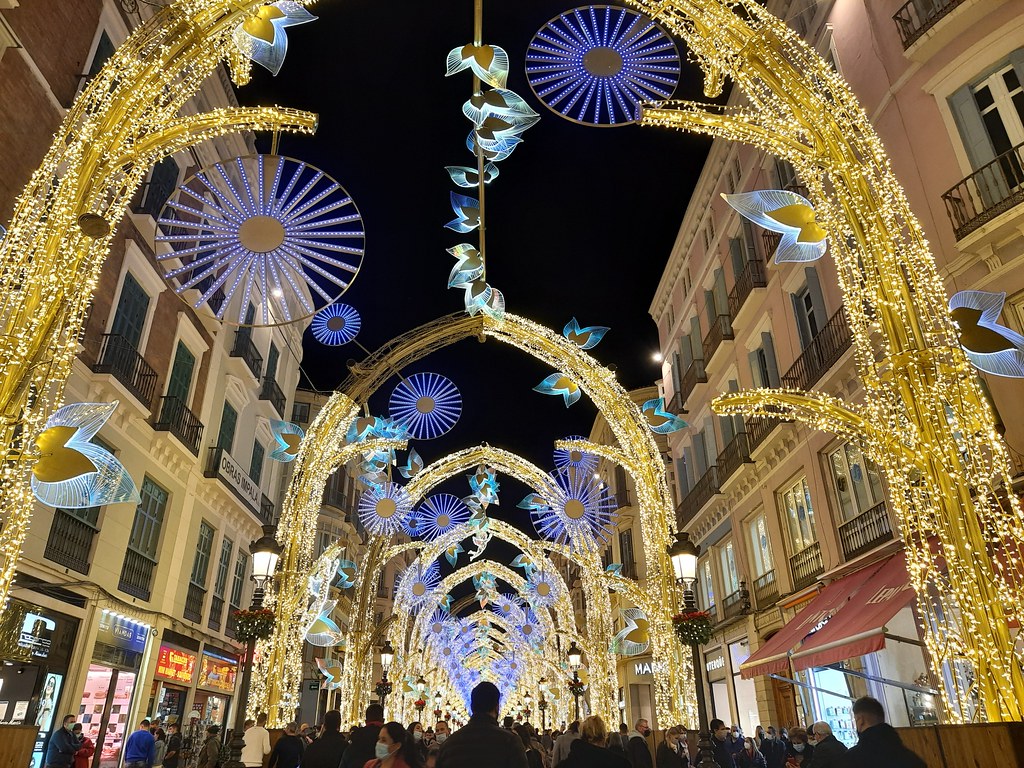 Nothing quite gets you in the mood for the festive season than seeing the illuminations. And the Christmas lights in Malaga won’t disappoint!

The Malaga Christmas lights are famous throughout Spain, with the pinnacle of them being along Calle Larios which features the whole avenue made into a gigantic twinkling archway or canopy.

Calle Larios is situated right in the heart of Malaga, and naturally attracts thousands of visitors every night. Although the lights follow the same format of being in a tunnel-like formation, each year there is a different theme. In the past, this has included Christmas forests with leaves and flowers, other times has featured celestial decorations. The illuminations stretch along the whole length of Larios street. The music and light show takes place throughout December with the synchronisation of the lights flash and twinkle along to familiar Christmas songs.

You’ll see illuminations and displays along many other of the major streets in Malaga. During Christmas 2021, there was even a performance of wintery scenes projected onto the wall of Malaga Cathedral.

Like most other cities in Europe, you’ll also find enormous Christmas trees. The style you’ll find in Malaga are not real trees, but instead, large hollow cone-shaped structures covered with lights. The biggest ones can be found at Plaza de Constitution, Plaza de la Marina, Plaza del Obispo, Huelin Park and in Plaza de Enrique Gracia.

The Nativity Scene or Belén in Malaga 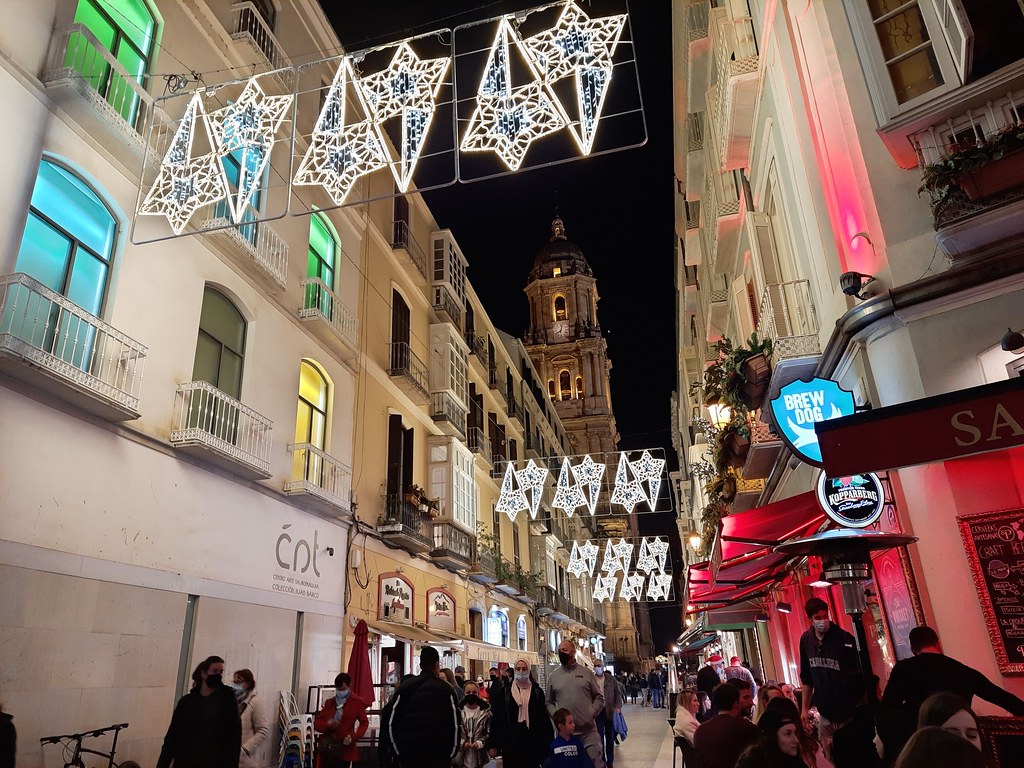 Nativity scenes are a big deal in Spain. They are known as Belén or Nacimiento are always a firm favourite of locals and tourists of all ages.

Belén translates to Bethlehem, and you’ll see signposts outside of places like churches and official buildings directing you to them. Most shops will have a small nativity scene – but one of the more impressive shop displays is the Nativity scene in El Corte Ingles.

The Belen’s are usually free to visit, although most will request a donation. You can see the better ones at Malaga Town hall which is the oldest one and quite extravagant featuring running water and lighting. Expect to queue a long time to see this one, it’s very popular.

Malaga Cathedral offers a more traditional Belén. As well as Cofradía de Estudiantes Asociación Cultural Zegrí. These are also some of the biggest Belen’s in the city.

What happens on Christmas day in Malaga? 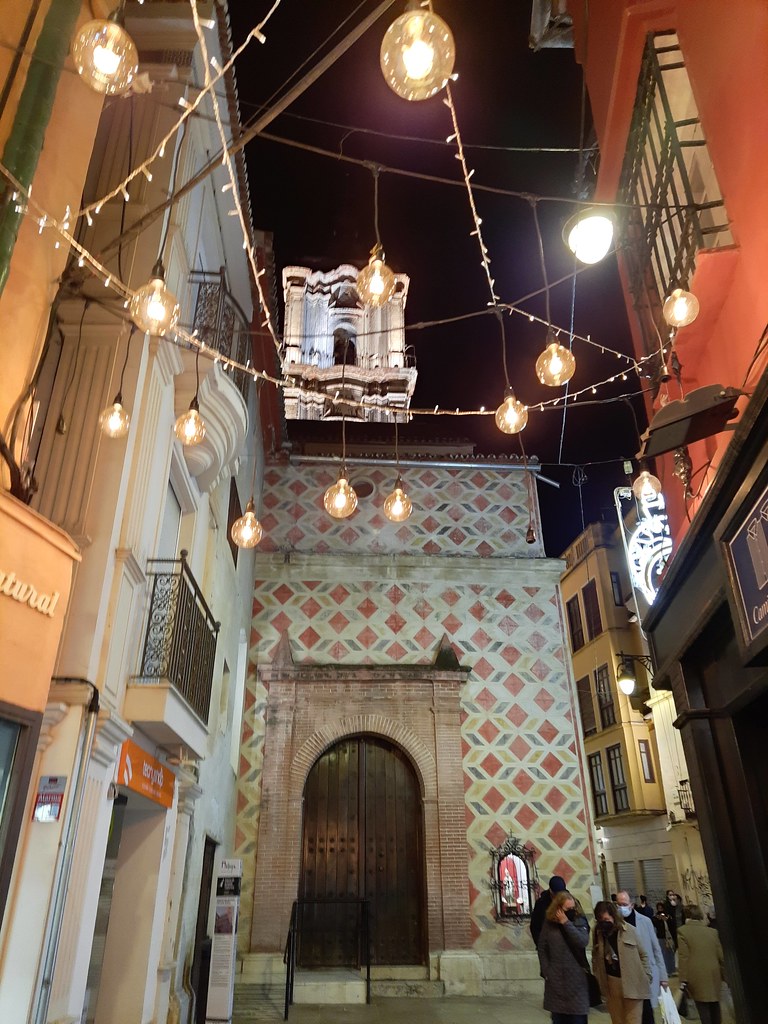 In the UK, the big celebration happens on December 25th, in Malaga, this day is much more relaxed. The most important day here is Christmas Eve, the 24th of December. You’ll find that unlike in the UK, where this day is reserved for last-minute shopping or going out for a festive drink with friends, most places will be closed (or if they are open, they will close by lunchtime).

The 24th is when the family have their main Christmas meal, and celebrate what we would typically do on the 25th. This evening is called  Nochebuena (the good night). The tradition calls for a big family dinner in the evening, and similarly to the UK consists of a stuffed turkey or chicken, although in Malaga seafood is very popular. Of course, Jamón Serrano (the traditional cured ham) will feature on every Christmas Table.

On actual Christmas day, most of the shops will still be closed (as it’s a national holiday), but you’ll find more bars and restaurants open – particularly in the evening, and families walking around the city, relaxing and enjoying a family day. 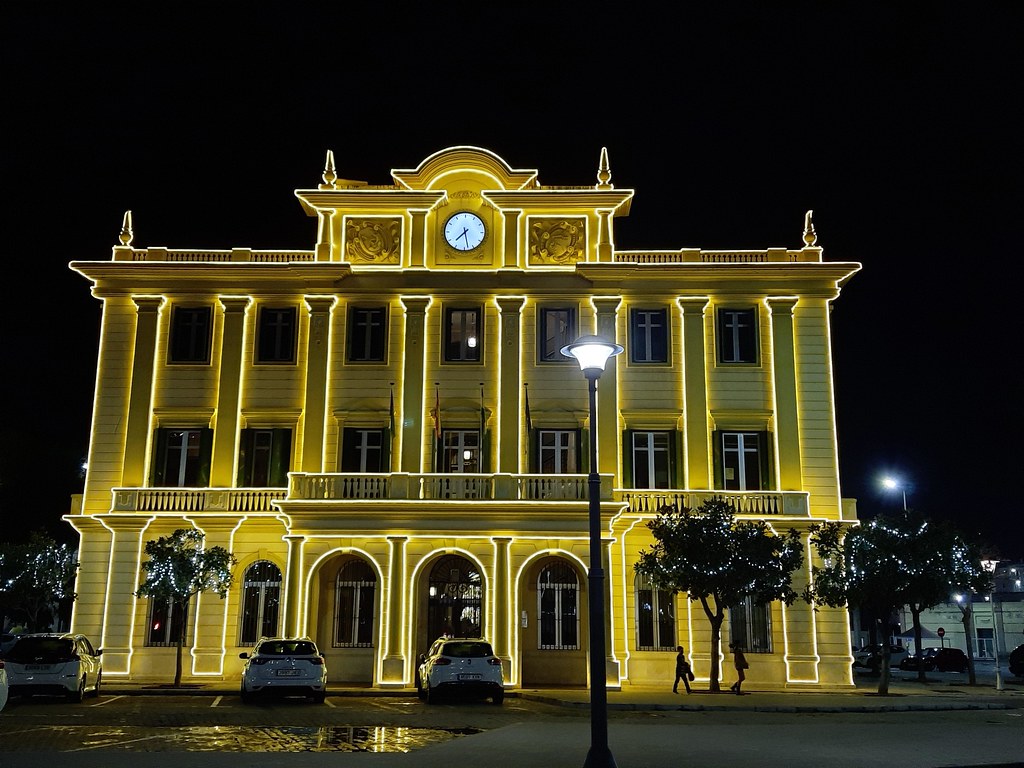 It’s said that each grape represents good luck for the following year, with each green grape counting for a month of the year. When the clock strikes midnight, the grapes are eaten, one at a time, with each chime of the bell.

It’s worth noting that this is easier said than done. Eating twelve grapes in quick succession can be a challenge, the trick is to prepare your grapes in advance. Opt for the smallest ones, pick them off the stalk and wash them before putting them in a bowl. This makes it much easier to eat them at speed and alleviates seeing in the New Year while choking on a grape. 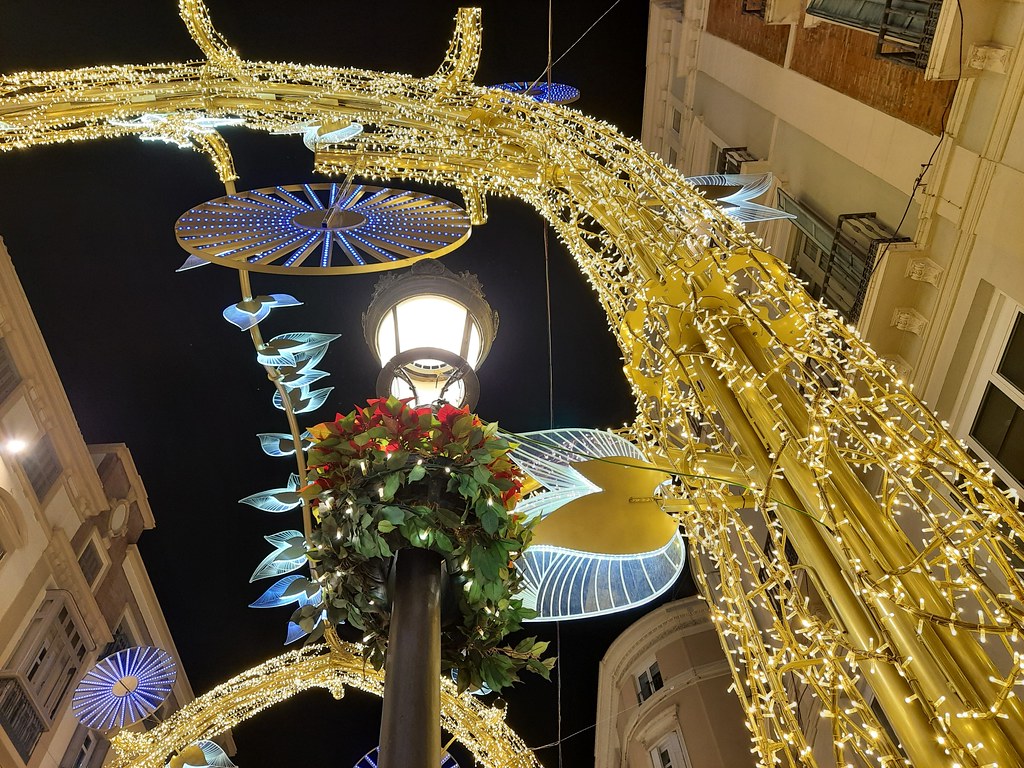 The Spanish continue their month-long festival into January. On the 6th of January, they celebrate King’s Day. The Three Kings’ Parade (Cabalgata de Reyes) happens on the night before, the 5th January, starting in the early evening at about 5 pm at the Ayuntamiento, the Town Hall. The parade follows a route all around the city, where the streets of Malaga are filled with floats and carriages.

The event attracts thousands of people who line the streets to watch the Three Kings’ Parade. It features the three Kings, Caspar, Melchior and Balthasar, on colourful and lavishly decorated floats. From the floats, they throw out sweets and small gifts for the children.

This tradition comes from the Nativity Story when the three wise men or kings followed a star while carrying gifts. This fun interpretation represents the journey to see baby Jesus, where the three kings offered their gifts: gold, incense, and myrrh. Today’s gifts have been switched up to a more edible guise.

Actual Kings Day is a little bit like a second Christmas for the Spaniards, where gifts are given to each other. It’s also another national holiday. 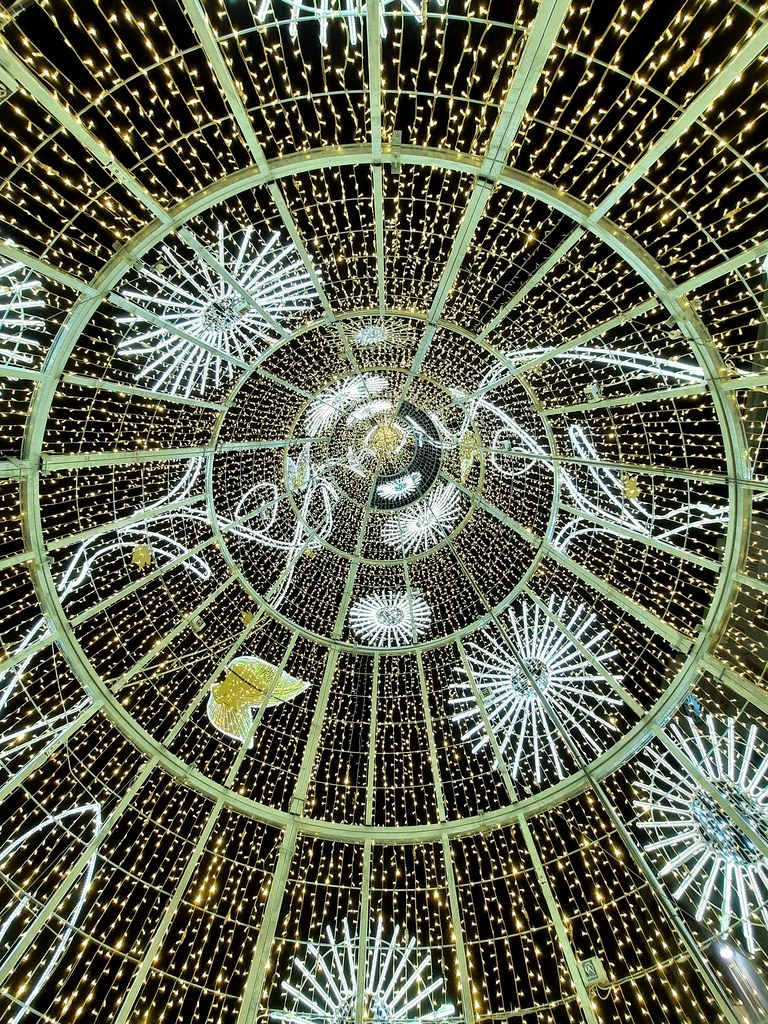 The festive season in Malaga is a nice balance of traditional customs intertwined with regional traditions. Whether you’re interested in seeing the Christmas markets and lights or taking part in the local celebration of the twelve grapes or Kings Day, you’re sure to have a wonderful experience when visiting Malaga during Christmas.

Are you planning to visit Sevilla as well during Christmas time? Check out our article about Christmas in Sevilla by clicking here.