Olvera is one of the most beautiful white villages in Andalucia, located on top of the hill, overlooking the olive trees valleys covered valleys below. Olvera is a quiet town where you won’t find many other tourists. It’s a lovely place to spend a tranquil afternoon, visiting the castle and enjoying tapas over a glass of local beer or wine.

After my visit to this beautiful Andalucian town, here are my suggestions on the best things to do in Olvera:

How to get to Olvera 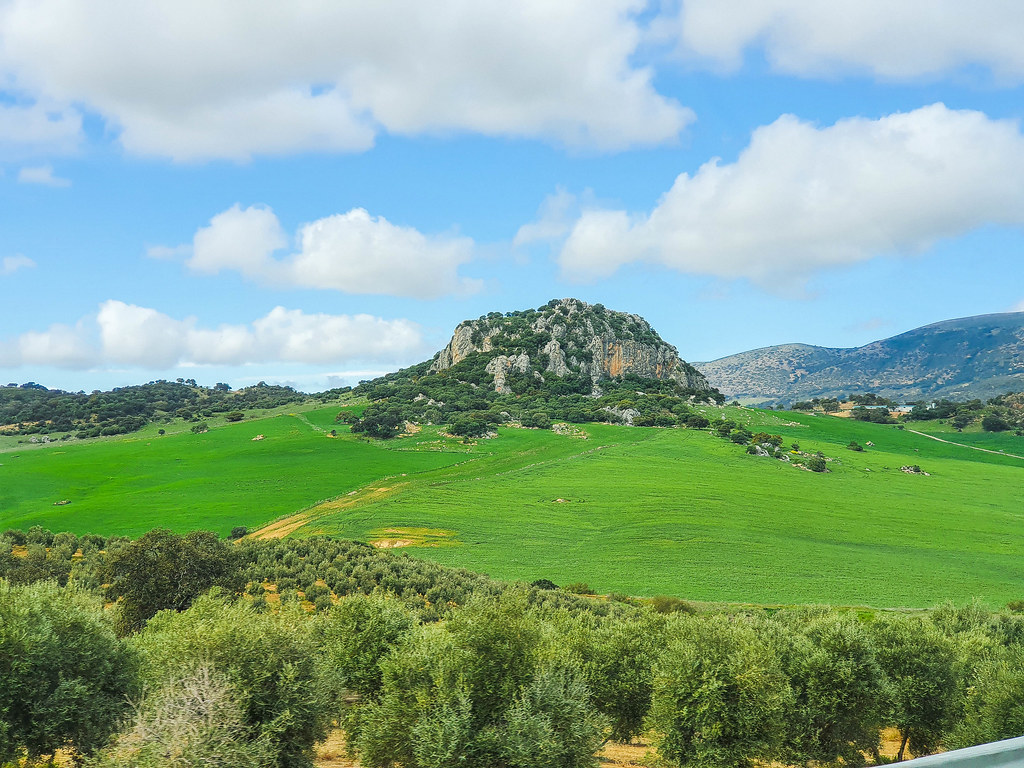 Getting to Olvera from Malaga is pretty straight forward, on a fast road. The 109 km trip takes around 1.5 to 2 hours, depending on the traffic. Most of the times I drove to this part of the country, the roads were pretty empty.

From Malaga, follow the A35 until just after Ardales, then merge onto A36 until reaching Carretera de Antequera which crosses through the beautiful Cordilleras Beticas, going all the way to Olvera. Below you can see a detailed map of the route which you can save on your GPS.

Where to Park in Olvera 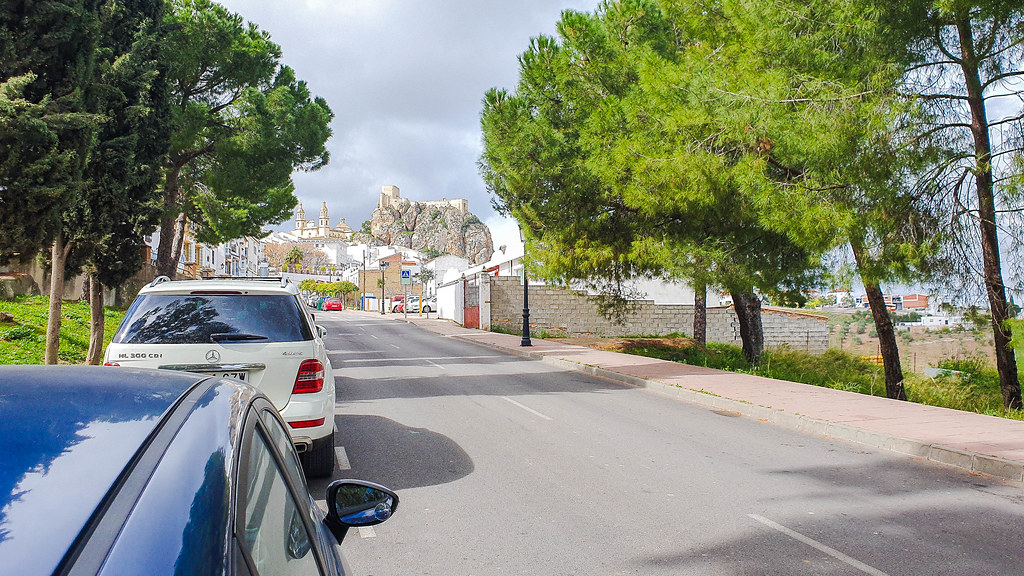 It wasn’t difficult at all to find a parking space in Olvera. As a new driver (with only 2 years old experience), I always dread driving through the small villages in Andalucia because of the very narrow roads. However, in Olvera, I didn’t have any issues. I did my research beforehand and chose to park at the feria ground (click here for directions) but because I wasn’t planning to come to Olvera on the particular day that I visited, my companion set the GPS whilst I was driving already, so I didn’t get a chance to park where I planned. Instead, I parked on the side the street, just below the castle. There are plenty of spaces here, free of charge. Click here for directions to the free parking.

What to Do in Olvera: 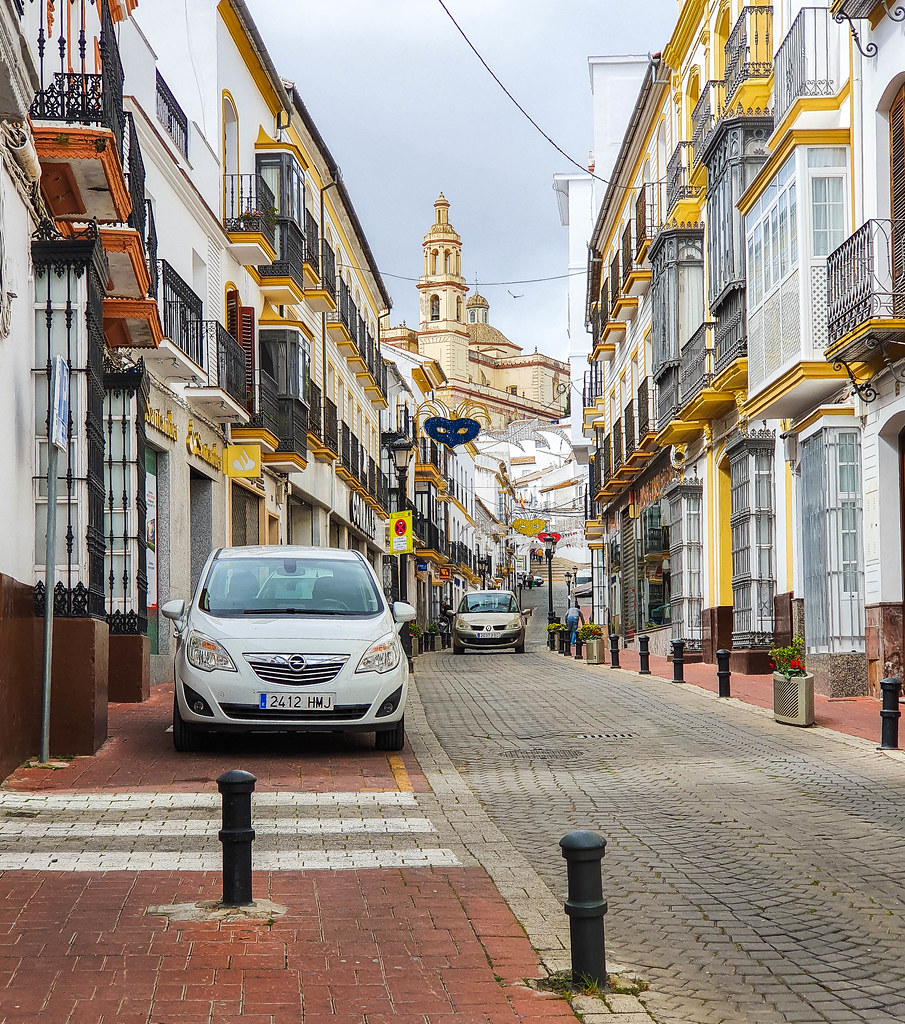 Calle Calzada is one of the most photographed streets in Olvera. The narrow road crosses the Barrio de la Villa neighbourhood, from the lower part of the town all the way to the foothills of the castle. It is a very picturesque route, going up the hill between white houses with yellow borders around the windows and balconies. At the top of the street you will find the Olvera Castle. 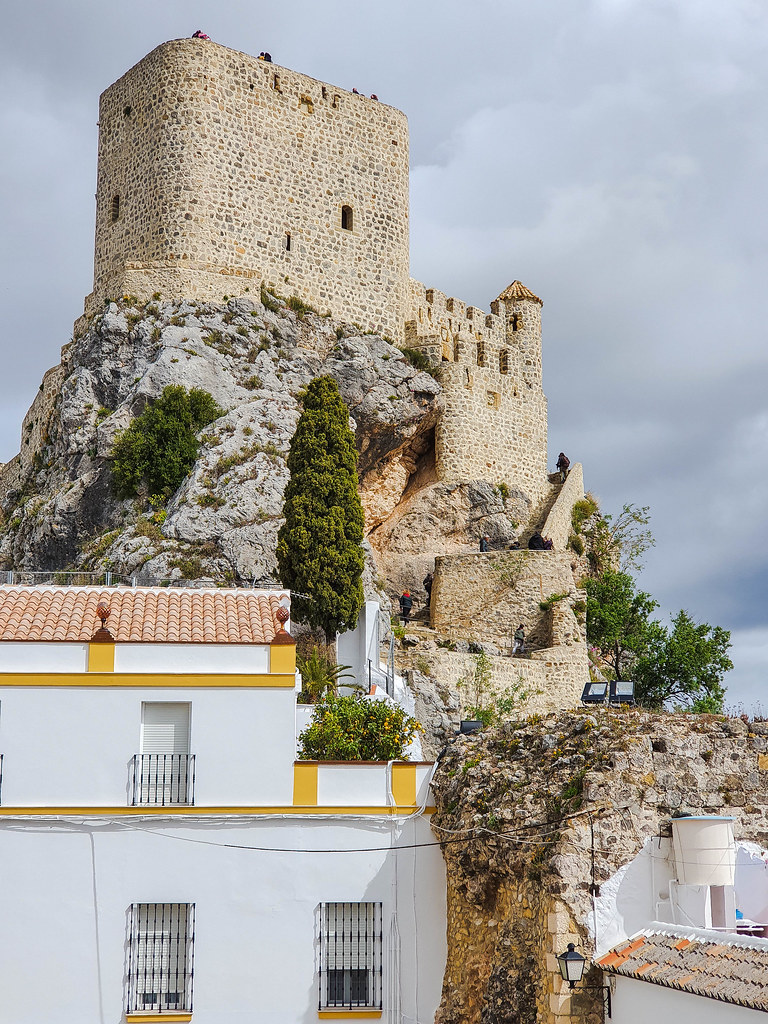 The Olvera Castle was built by the Moors during the 12th century, as part of the defence system of the border of the Nasrid Emirate of Granada. In the 13th century, Olvera was conquered by the Kingdom of Castille, and the fortress was rebuilt by the Christians into the building that we see today. However, the castle still maintains a lot of its original Moorish features, and this is why it is a very interesting monument to visit.

The castle of Olvera was built on a cliff, embracing its irregular shape. It has a barbican, walls with a walkaway on top, towers, and a subterranean enclosure with two cisterns.

The entrance fee to the castle, which also includes the Cilla Museum, costs only 2 euros. Beware if you are scared of heights, as the narrow and steep spiral staircase to the top can induce vertigo. The views from the top are magnificent. 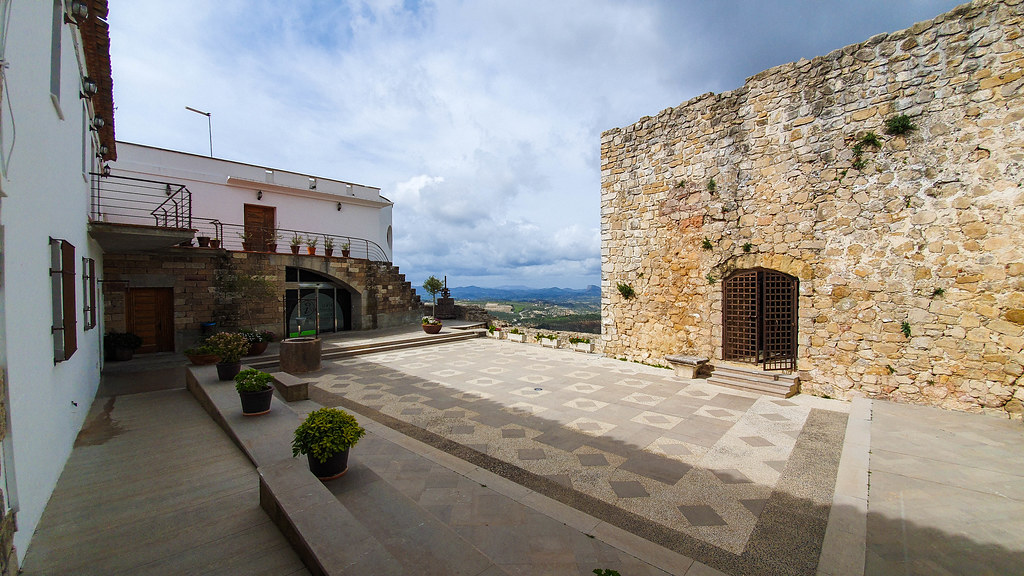 Cilla Museum, which used to be a women’s prison in the past, is now a cultural centre and the home of the tourism office of Olvera. It has a lovely yard with a very good preserved medieval well, and a beautiful viewpoint. The Cilla Museum is surrounded by the castle’s walls, with a defence and watchtower closing the patio.

Inside the museum you can see reproductions on how Olvera used to look like and how people’s daily lives and activities were during medieval times. The name of the building, “Cilla”, means barn, as during its glory days as part of the castle, was used as one during the 15th century. Later on, it was transformed into a prison. 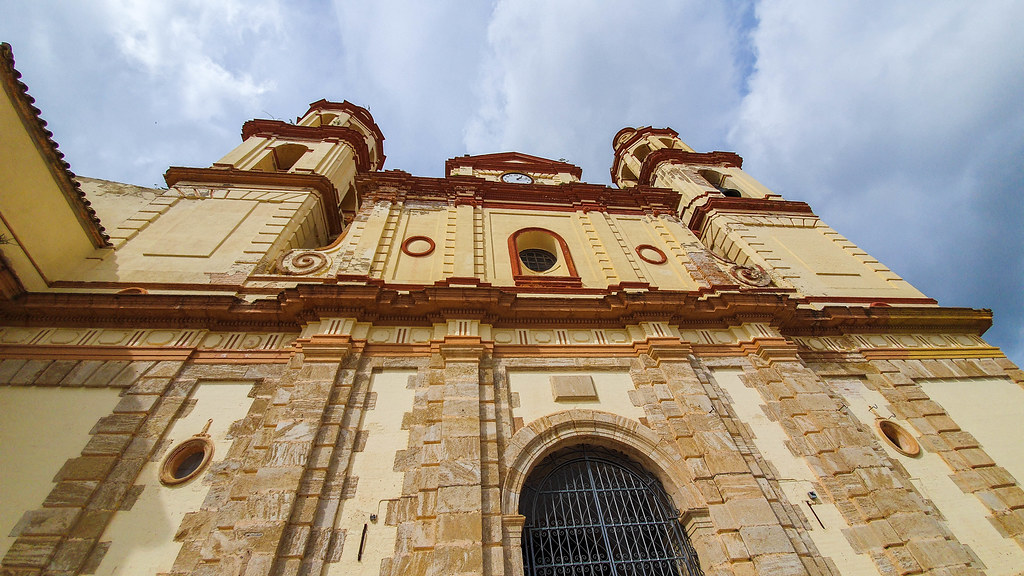 The Nuestra Señora de la Encarnación is unique in the mountains of Cadiz because of its unusual size and its shape. When I visited Olvera the church was closed, so I couldn’t see it on the inside. But the outside was nothing less of spectacular. In front of the church there is a beautiful viewpoint from where you can see the entire white town of Olvera descending on the hill.

The style of the church is Neoclassical, built on the ruins of a Gothic-Mudejar church which preserves its apse.

The church can be visited inside from Tuesday to Sunday between 11AM – 1PM, for a fee of 2 euros.

Enjoy the Viewpoints in Olvera 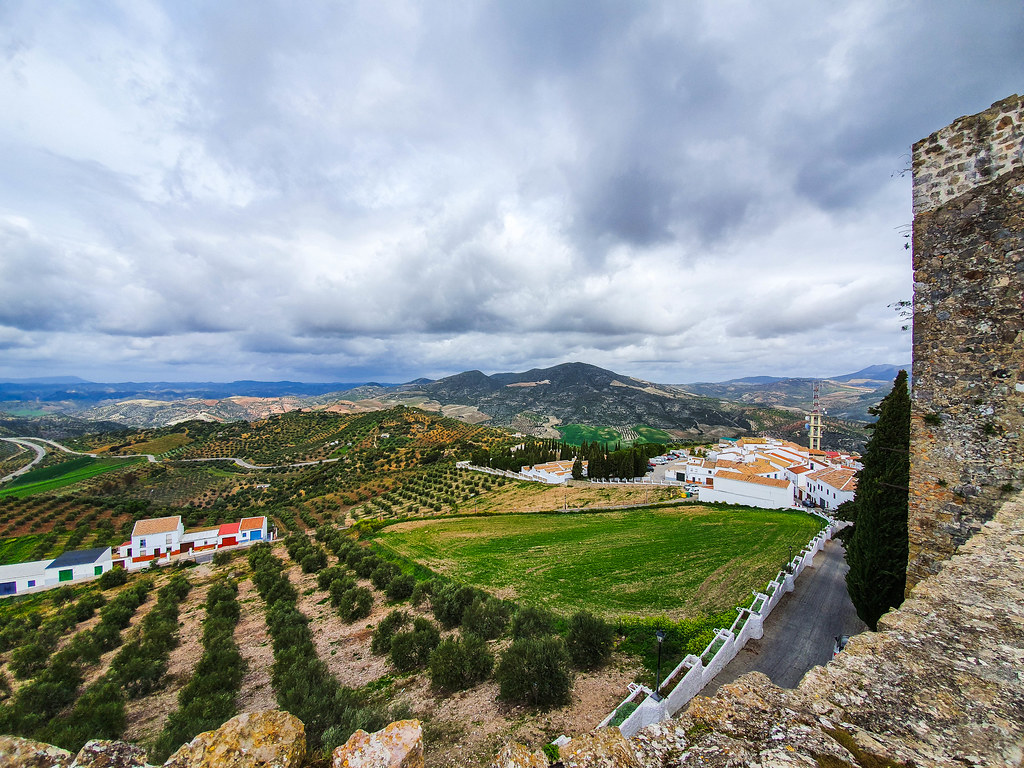 There are two stunning viewpoints in Olvera from where you can admire the panoramas below. Because Olvera is located on top of a hill, there are fantastic views over the entire landscape below.

The first Mirador that you should go to is located just in front of the church, overlooking the whitewashed houses and the valley below, all the way to the mountains ahead, towards Antequera.

Another beautiful viewpoint is located in the courtyard of Cilla Museum, from where you can see the windy roads going around the hills covered in olive trees.

From the top of the Tower of the Arab Castle you have a 360 degrees panoramic unrestricted view over the entire land below.

Where to Eat in Olvera 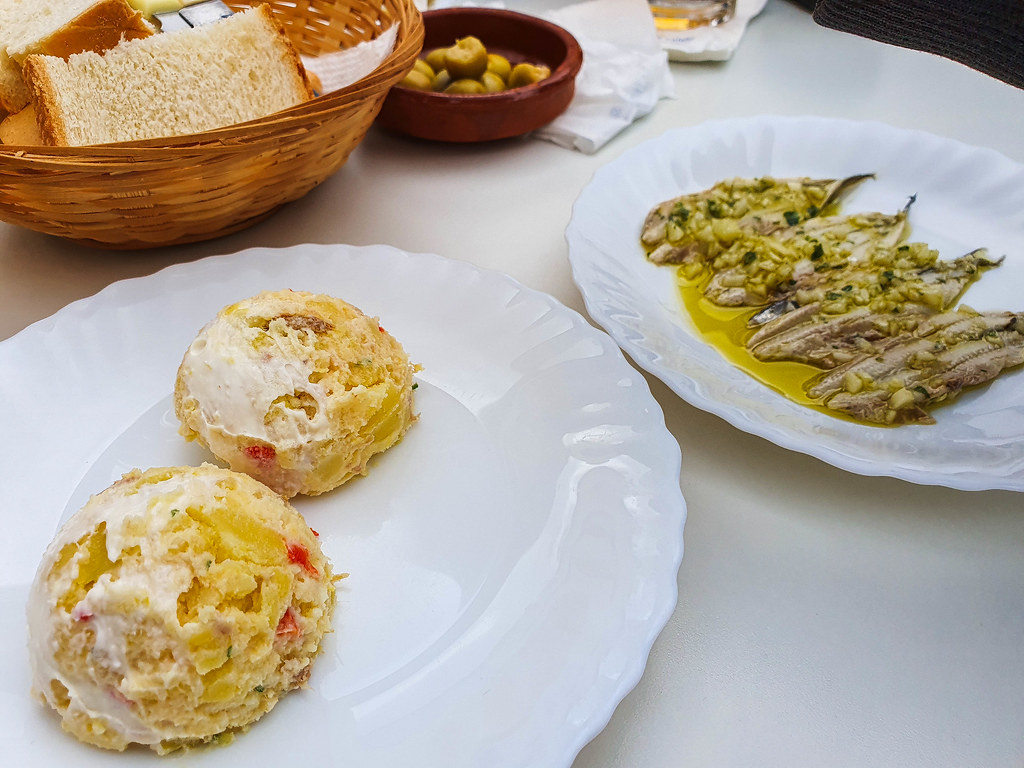 Bar La Plaza, located in Plaza Ayutamento, is a great choice for cheap tapas with a view of the church. This restaurant is a typical Spanish tapas bar, offering homemade comfort food such as ensalada rusa (Russian potato salad), albondigas en salsa (meatballs in wine sauce), boquerones en vinagre (fresh anchovies marinated in vinegar) and, one of my favorites, carrillada (tender pork cheeks slow cooked in Port wine). The price of tapas varies between 2-4 euros, and the portions are quite large.

They also have full portions of rabo de toro, which is another traditional Spanish dish: oxtail stew.

Where to Stay in Olvera

Being such a small town, in Olvera you won’t find massive hotels. Most of the accommodation options will be small B&Bs or holiday homes. You can check out the options by clicking on this link.

13 thoughts on “The Best Things to Do in Olvera, Andalucia, Spain”