How to get to Acinipo

Getting to Acinipo is pretty straight forward, no matter which direction you are coming from. If you are driving from Malaga, the Roman ruins are merely a 10 minute drive further away, after Setenil de las Bodegas. From Ronda, the 22 kilometres to Acinipo takes 30 minutes to drive, on a scenic road between olive tree plantations. 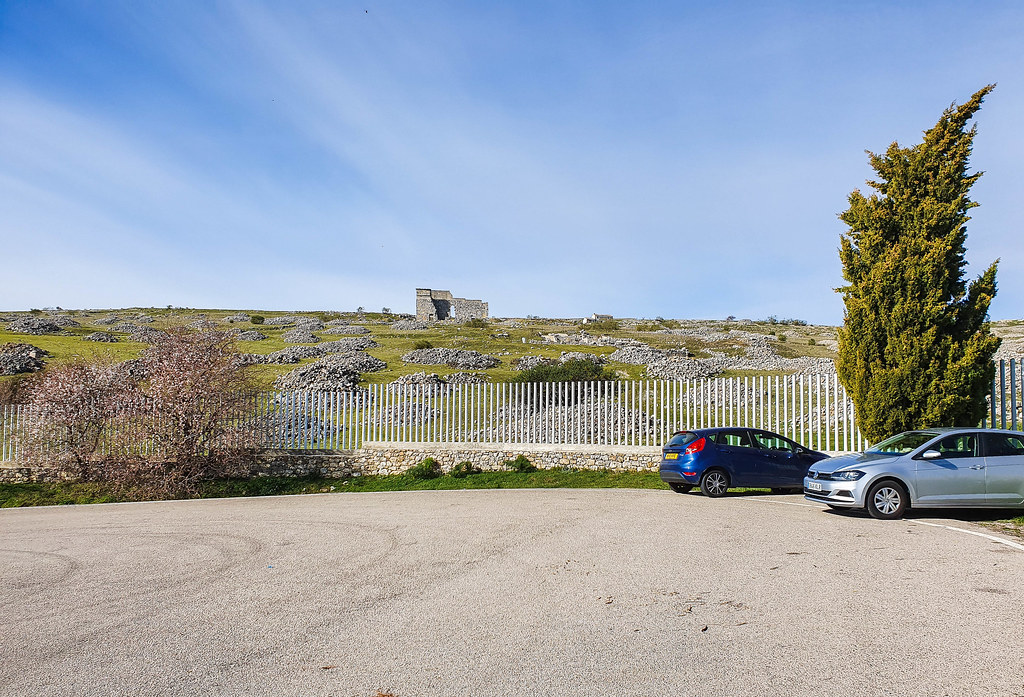 Parking at Acinipo is very easy, with plenty of spaces just in front of the entrance gate. Part of the beauty of visiting Acinipo is that you can have the entire site to yourself, without other tourists around. When I visited, there were only two other parked cars.

Acinipo is not open every day of the week and sometimes it does close last-minute. Before you plan a trip there, check the weekly timetable on their Facebook page, by clicking here. It is in Spanish, but they do post the schedule as a photo, so it’s easy to read.

You would be surprised to know that there is no entrance fee to visit the ancient city of Acinipo. The keeper will tell you (in Spanish) a little bit about the history of Acinipo, and guide you on how to best visit the site. Don’t worry if you don’t know Spanish, the site has a map and plaques along the way, with information in English about each of the buildings.

It takes around an hour to visit Acinipo.

The Archaeological Site of Acinipo 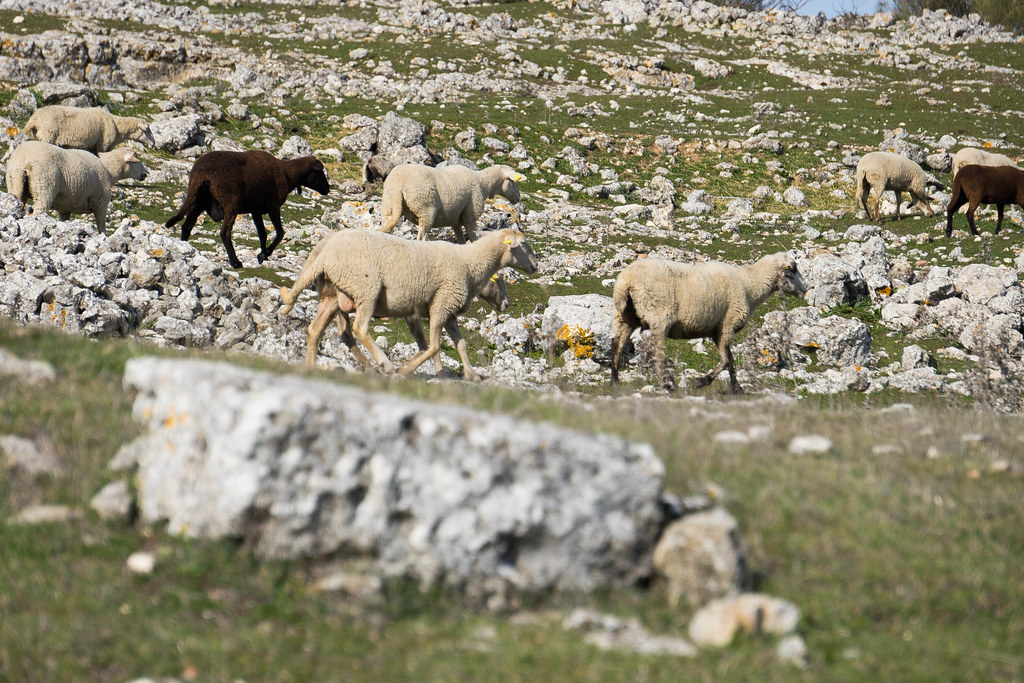 Today, Acinipo is quite and asleep, under piles of rubble and stones brought here from the nearby Torcal de Antequera, who knows how many thousands of years ago. The stones that are now laying on the ground all over the site, were once part of grandiose buildings, columns, statues, fountains. 5000 people lived here in the first century AD.

The piles of stones can only challenge our imagination to picture in our minds the hustle and bustle of the once thriving city, the trade going on, and the people rushing around or chatting to each other on the corner of the streets. 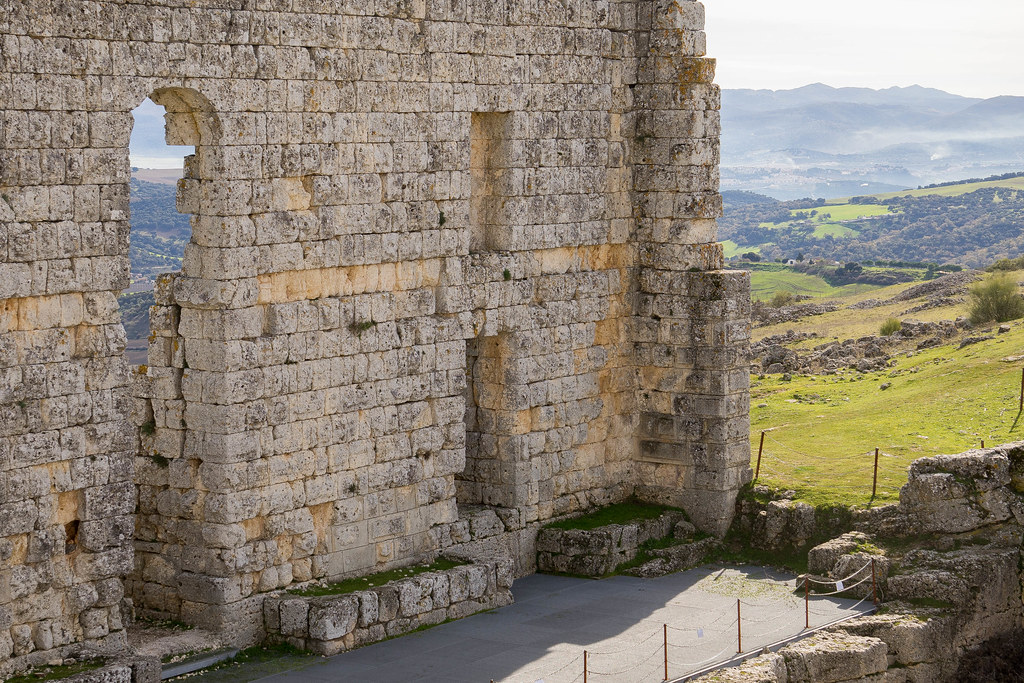 Acinipo is believed to have been built approximately around the 9th century BC, abandoned in the Iron Age, and repopulated again in the 5th century BC as an Iberian walled city. It was developed after the year 206BC, when the Romans arrived and started to build large public buildings. Acinipo soon became a wealthy strategic point between Sevilla, Cordoba, and the coast of the Iberian Peninsula. It was a prosperous city which minted its own currency and traded with the nearby cities. Its glory days lasted until the second century, when Ronda replaced it as the main city in this mountain area. In fact, in the 16th century, Acinipo was known by the name of “Ronda la Vieja” – “The old Ronda”.

The first archaeological excavations from Acinipo begun in 1967 but to this day, most of the city remains undiscovered. 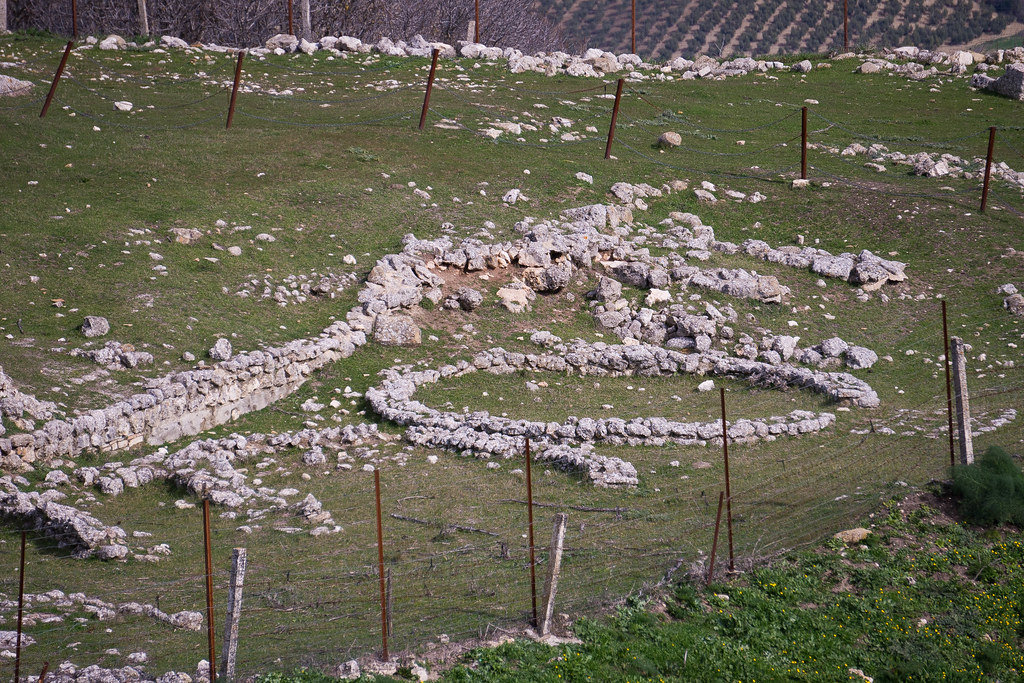 As you enter the site of Acinipo, on the right hand side you can see the circular foundations of the prehistoric “cabanas”, which date back to the iron age. They are the oldest buildings in Acinipo, thought to have been built sometimes around the 9th century BC.

These establishments have typical characteristics of the local Iberian population from the end of the Prehistoric age: a round base with a stone plinth, adobe walls and a conic roof made out of dried vegetation. Each house had a small fireplace, used for both cooking and heating the interior during the winter. A stone paved alley led to the door. Inside the houses the archaeologists found remains of Phoenician amphoras with traces of salted fish, proving that the city was connected to, and received trade from, the Mediterranean Coast. You can see the archaeological artefacts found here in the Municipal Museum of Ronda. 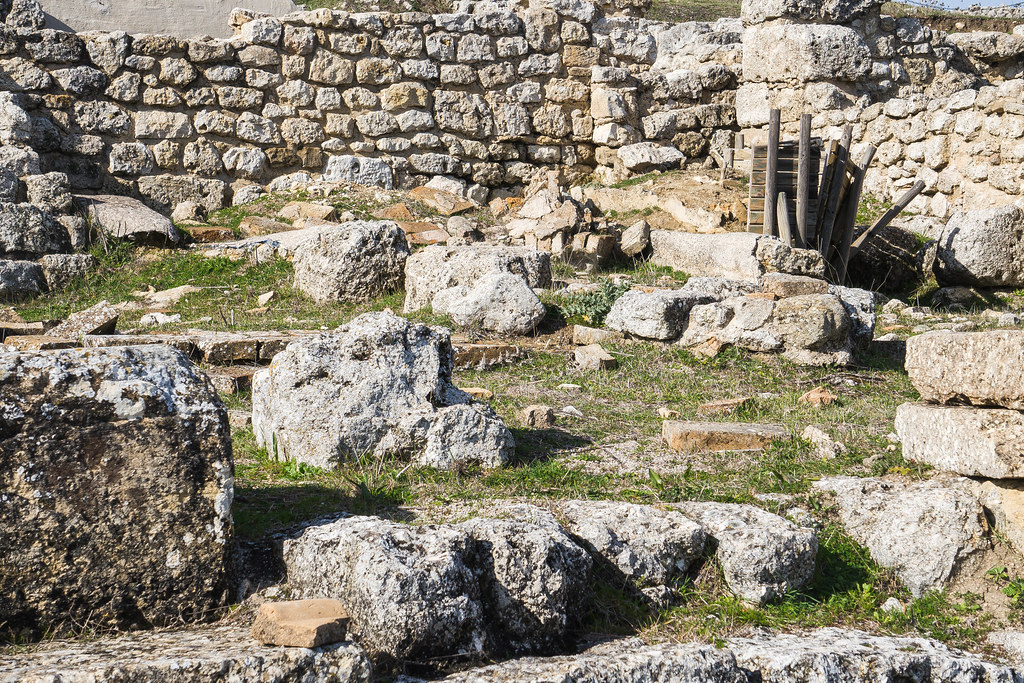 The Domus is the example of an aristocratic establishment of a wealthy Roman family. Built on two different levels, the rooms were spacious and had their own specific designation. The lower level is believed to have been the kitchen and the storage space. Upstairs there were the rooms where the family would have lived, together with a small altar to the Gods, which was meant to protect the house and its inhabitants. The access from the ground to the first floor was via stairs, which points out how architecturally developed the city was at that time.

It is not known what the top part of the house was used for. It is believed that these houses were abandoned at a later time, when the Roman aristocracy starter to prefer living in the countryside rather than in an urban environment. 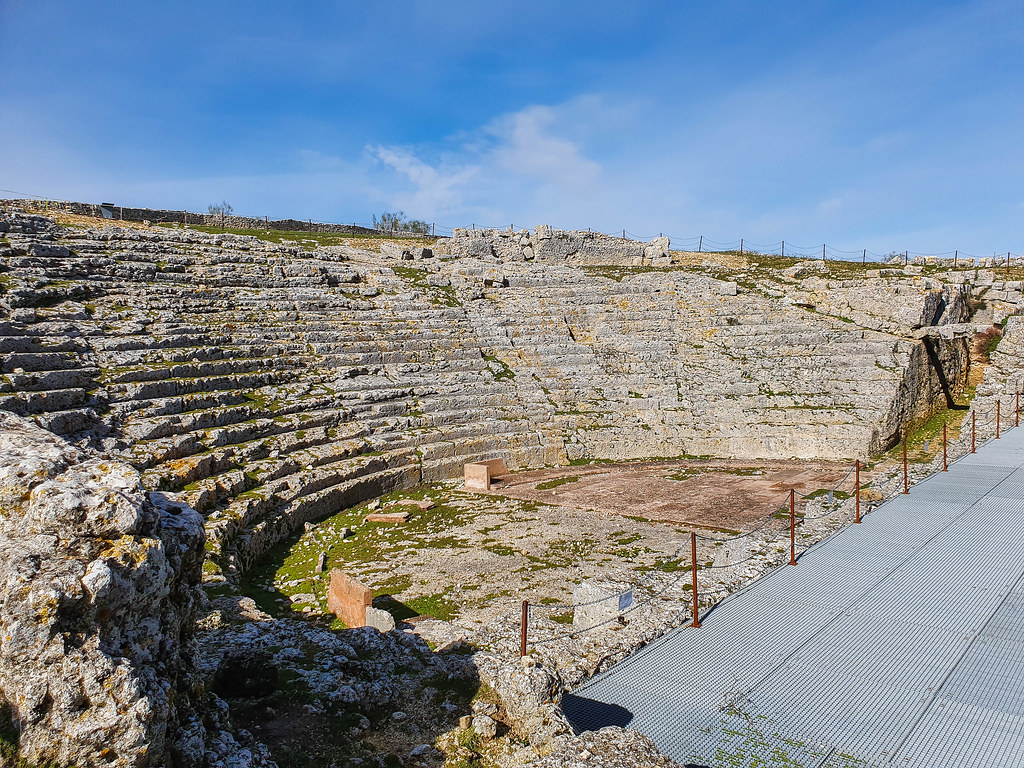 The Roman Amphitheatre from Acinipo was built sometimes around the 1st century, which makes it one of the oldest still standing in Spain. In its glory days, it used to have a capacity of 2000 people – that’s almost half of the population of the city!

Built on the highest part of the city, its open sitting area was carved directly into the limestone. Just in front, the orchestra area was decorated with pink marble.

After the city’s decline, the amphitheatre was abandoned, and later used as a watch tower during the Moorish occupation. 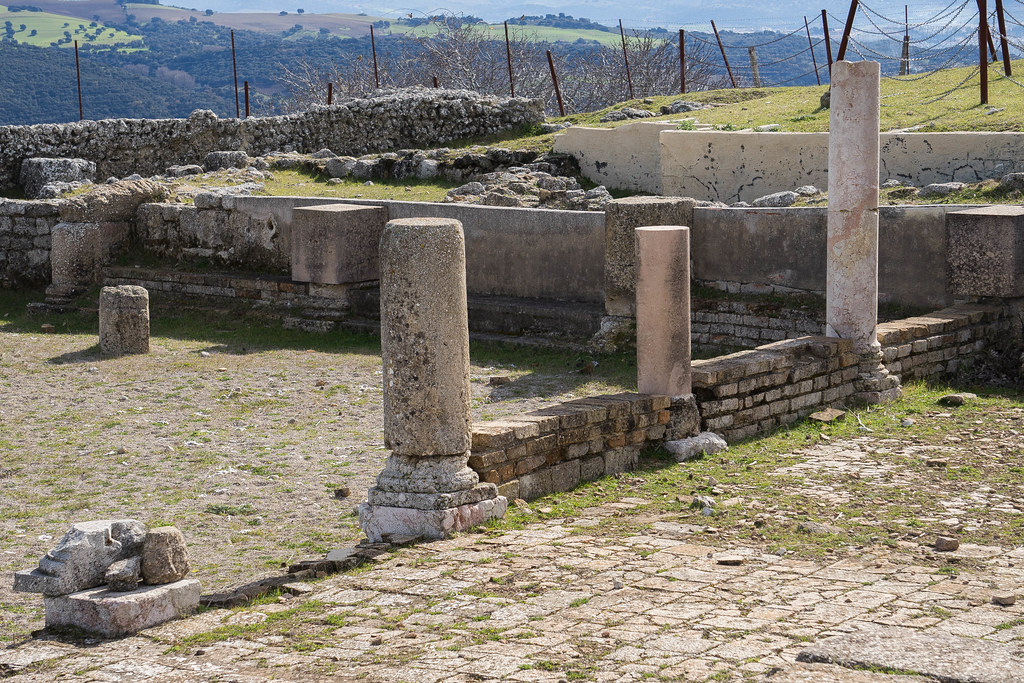 In any Roman town of the time, personal hygiene was a very important element of the social life. The same as every other city, Acinipo had a large thermal baths complex, with changing rooms, latrines, an open space for physical exercises, hot, cold and temperate rooms. The water was brought in from a nearby source, and the rooms were heated by burning wood underneath the floors.

The thermae was also a place for social interaction, where locals would gather to converse with each other. 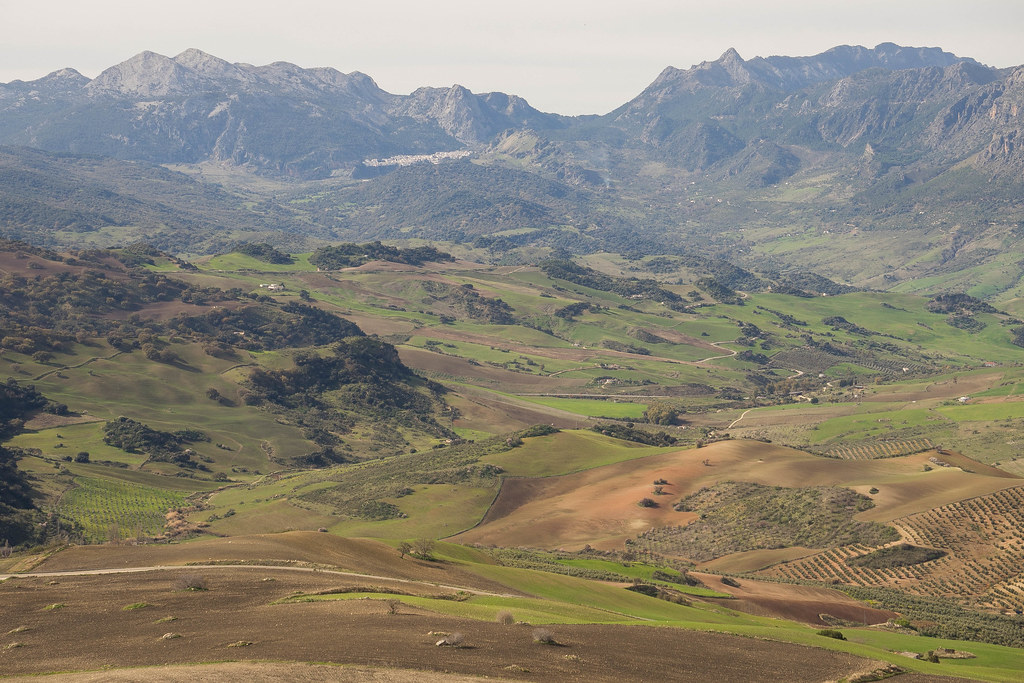 From the Roman Amphitheatre, I strongly recommend that you walk a little bit further up towards the stone fence at the rear, or you will miss this spectacular panoramic view over the hills and mountains below. Acinipo sits at 1000 meters above the sea level, built on top of a hill, like most of the other fortified defensive cities in Andalucia. From the top of the viewpoint, you can see for miles!

Where to stay if you want to visit Acinipo

There are a few local B&Bs where you can stay if you want to visit Acinipo, which I do recommend because you will get to experience the Spanish hospitality. However, as Acinipo is not a day destination itself, you can always choose to base yourself in nearby Ronda and just drive there.