Guadix will always be a special place to me. This is where I experienced Spanish kindness the most, when the country went into lockdown back in March 2020. I had planned the trip to this beautiful city for quite some time, hoping to explore the Guadix Cave Houses and learn more about this mysterious place, close to Granada.

But my trip was cut short when the pandemic hit. I arrived in Guadix on Friday afternoon and experienced a fantastic sunset from the cliffs outside the city. Later, I had dinner with my friend at a small tapas bar next to our hotel, and got chatting to the locals who kept buying us chupitos (Spanish for shots). 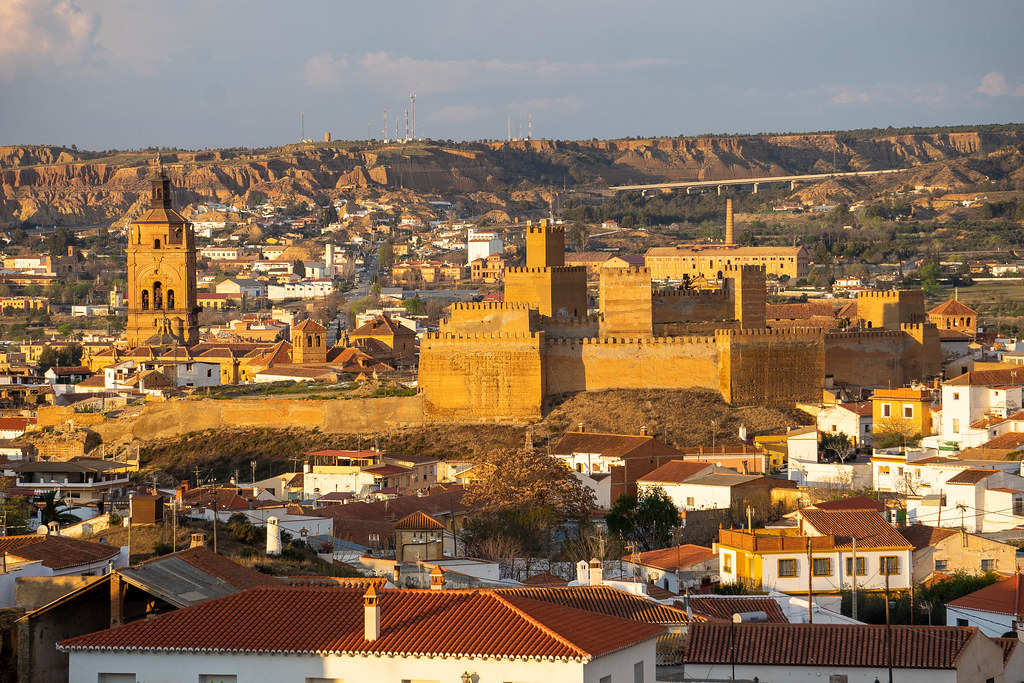 The next morning we awoke to rumours that something was about to happen. By the time we reached the coffee shop and ordered the usual tostada for breakfast, the panic had started to settle in. Whilst the city centre streets were still quite empty, the supermarkets were getting overcrowded with panic buyers. By lunchtime, the prime minister had announced the lockdown, and everyone disappeared from the streets. We agreed that there was nothing we could do, so we continued our exploration of Guadix. I still remember how strange it felt to walk along the side streets, avoiding the main roads where police were already starting to patrol.

Even though we didn’t get to spend two full days in Guadix, I still saw enough of its beauty to write this guide. Most people come to Guadix on a day trip from Granada. Unless they want a special cave experience, they won’t spend the night here, which is such a shame, as the independent small hotels have the loveliest owners. 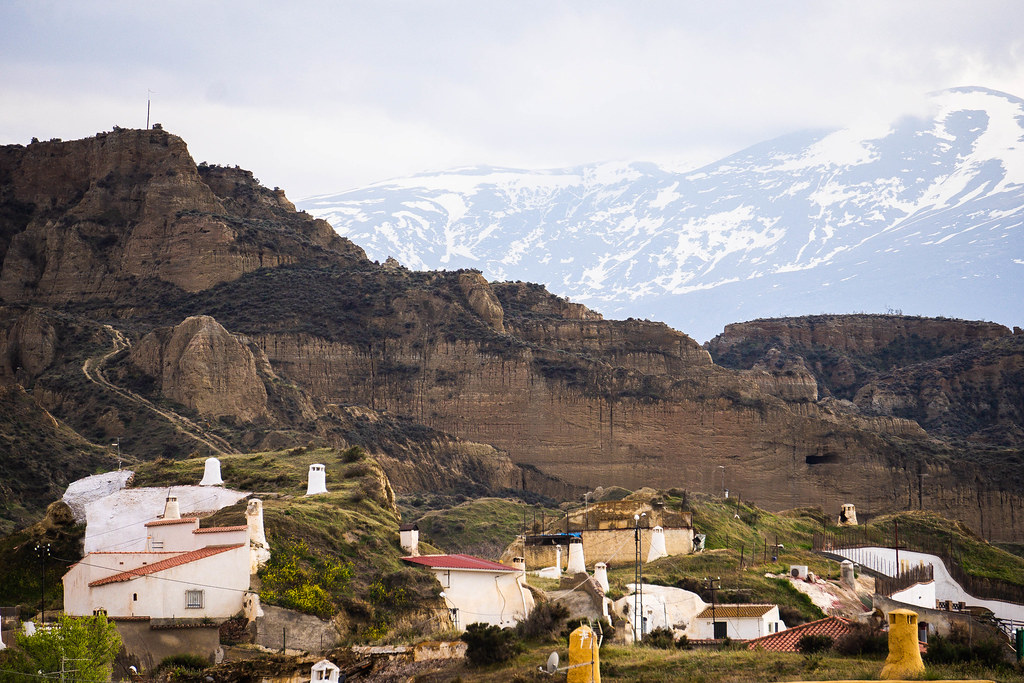 On Saturday night, we were the only guests of the Hotel El Caminero, in Purullena, just outside Guadix. The owner put an electric heater on for us whilst we were out exploring. She made sure that we were comfortable and still had a place to sleep during the night, even if she practically had to close. The staff at the tapas bar next door made sure that we were fed, and didn’t go to bed hungry. It was the only one still open… when we left, the staff offered us bread and milk to take home with us. Police had been earlier to inform them that they couldn’t open their doors again the next morning.

Contents show
Where is Guadix and How to Reach It
Where to Stay in Guadix
The Best Things to do in Guadix on a Day Trip From Granada
Visit the Cathedral
Walk around the Guadix Cave Houses Neighbourhood
Find the Best Viewpoints in Guadix
Explore the Alcazaba
Check Out the Ruins of Teatro Romano
Watch the sunset from Mirador del Fin del Mundo
Liked it? Pin it!
Related Posts:

Where is Guadix and How to Reach It 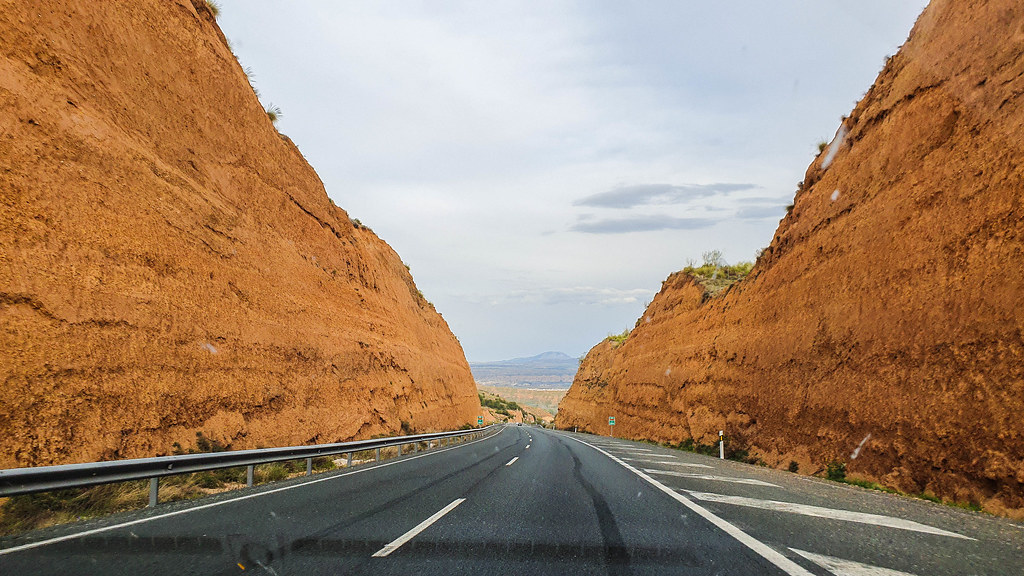 Guadix is located less than an hour’s drive from Granada, on the North side of the Sierra Nevada Mountain Range. There are several Alsa buses that connect the two cities, with prices starting at 9 euros each way.

If you plan to drive to Guadix from another destination in Andalucia, there are plenty of places to park around the city. I had no issue finding one right in the centre, next to the Roman theatre.

You can also choose a tour to Guadix, from Granada. You can pick between a small group Granada Geopark tour, or a private Guadix and Tabernas Desert Tour which can be customised to your liking.

Where to Stay in Guadix 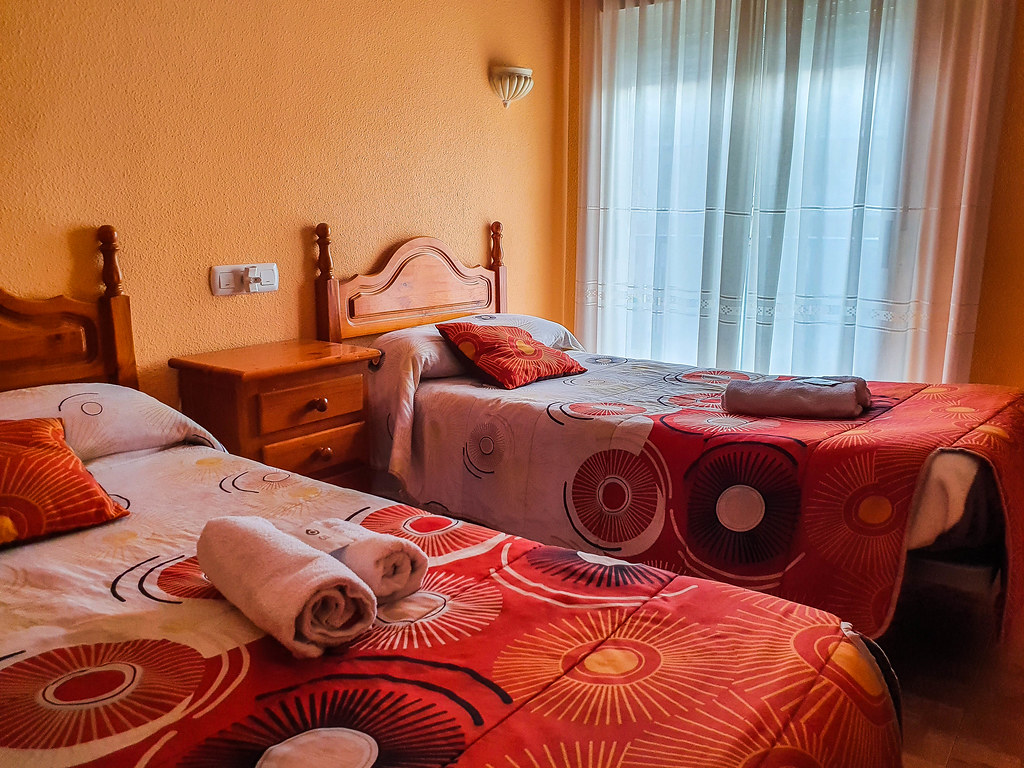 For an authentic experience, if you are spending the night here, you might want to choose an authentic Guadix Cave House Hotel. There are quite a few around the caves neighbourhood, some offering extra amenities such as swimming pools.

As I was travelling with a friend who had brought her dog along, our choice was very limited. Because we were driving, we chose to stay at Hostal El Caminero, located 4 kilometres away from the centre of Guadix. This budget, pet friendly hotel offers free parking, spacious rooms and a wonderful host who will make sure your stay is perfect. Based on my experience and the kindness I experienced, I highly recommend that you stay here if you’re also driving. You can read other’s reviews on TripAdvisor or book directly on Booking.com

For other options, such as cave houses, check the suggestions below:

Guadix is one of Europe’s oldest settlements, with the first people settling here sometimes during the Stone Age. Founded by the Romans and then highly influenced by the Moors, Guadix is a fantastic city to explore on foot. The different architecture types from different centuries and cultures blend into each other, creating a unique city surrounded by a surreal landscape. There are so many things to do in Guadix, from exploring the famous cave houses area to visiting old palaces and churches. 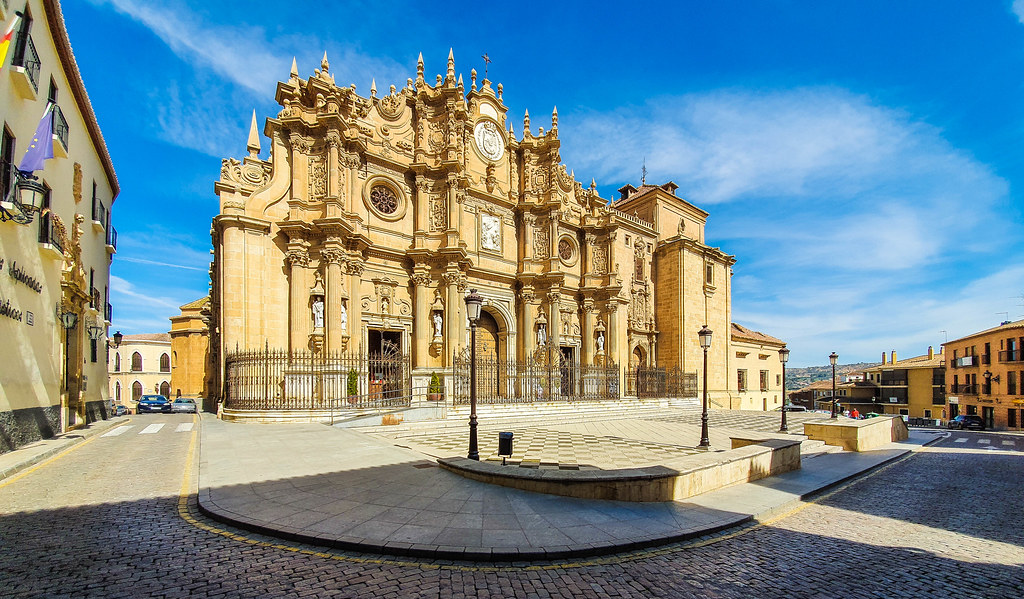 The Guadix Cathedral dominates the skyline of the city with its tall bell tower. Even though the current Cathedral was built between the 16-18th centuries, a place of worship has been on this site since the 1st century, when the Visigoths first erected a church. During the Moorish occupation of Spain, the church was converted into a mosque, only to be re-established as an episcopal seat back in 1489.  It is believed that Guadix was one of the first ecclesiastical districts under the jurisdiction of a bishop in Spain.

The Cathedral is built in a Baroque style. It has a gorgeous façade made of red stone and is decorated with statues and sculptures. The interior of the Cathedral is spectacular, with large paintings and stone carvings surrounding the altar.  When I visited, the entrance was free of charge. However, the usual price is £6 euros and includes climbing the bell tower and an English audio guide. 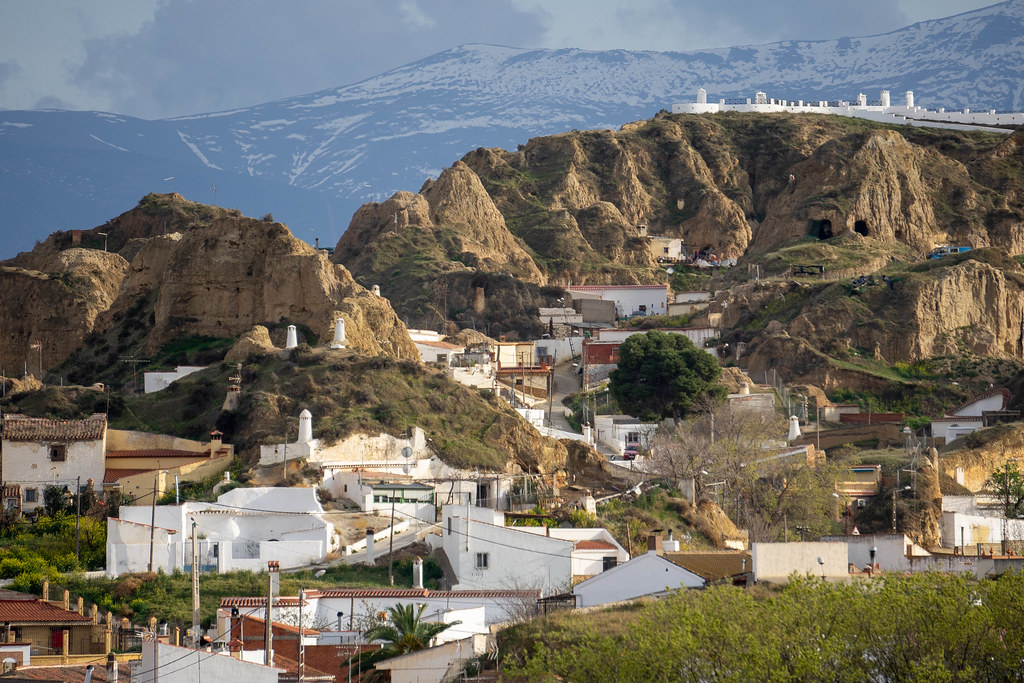 The main attraction in the city is the Guadix Cave Houses. In Barrio de Cuevas, most of the population have been living underground for hundreds of years. Sometimes, the only thing that marks a cave house is the tall, white chimney coming out of the ground.

The Barrio de Cuevas from Guadix have the highest concentration of cave dwellings remaining in Europe. Walking along the streets, between the mounds with a sheet instead of a door, I remembered the walking tour I took in Granada. The guide was so proud to be living in one of the caves outside of the city centre, explaining that he had all the conveniences of modern life but at half the cost. The cave houses don’t need heating or air conditioning because the temperature inside remains constant all-year-round, no matter what the conditions are outside. They are connected to electricity and water, and they have appliances such as fridges, washing machines and dishwashers that work the same way as in a traditional house. 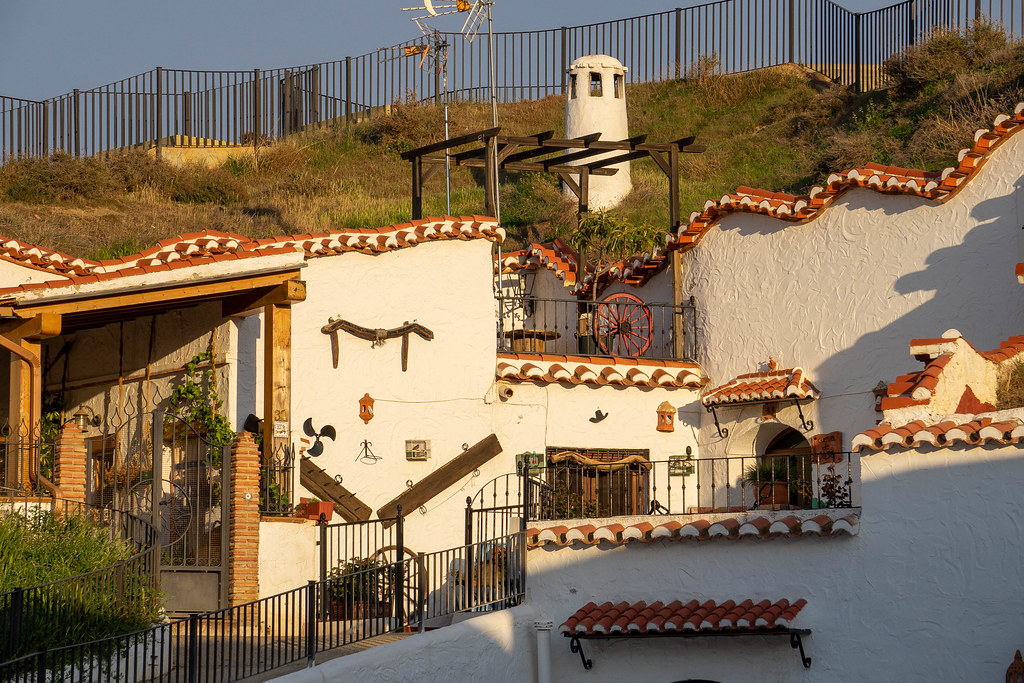 A great place to learn more about the underground houses in Guadix is the Cave Interpretation Centre, located in Plaza del Padre Poveda – in a cave, of course.

Find the Best Viewpoints in Guadix 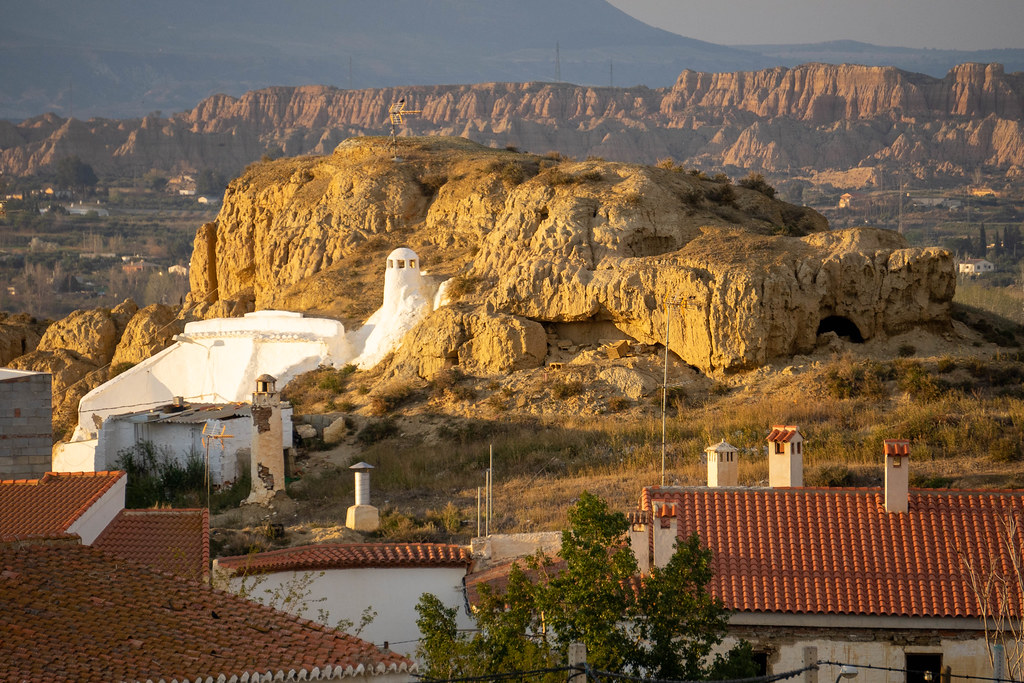 The best places to see the Cave Houses in Guadix are from the different viewpoints scattered around the city. Getting to these viewpoints involves a bit of climbing uphill, but it’s so worth it. The main viewpoint of the city is Mirador de la Magdalena, from where you can enjoy a 360 degree view of both the modern city and the Barrio de Cuevas, with the Sierra Nevada mountains as a backdrop.

Another great viewpoint is Mirador de las Cuevas. Located in the Caves Neighbourhood, this viewpoint gives a better view of the underground houses, with their white chimneys. This is also a popular place for cinematography, with many famous movies such as Morena Clara, Emerald City, or Don Quixote being filmed here. 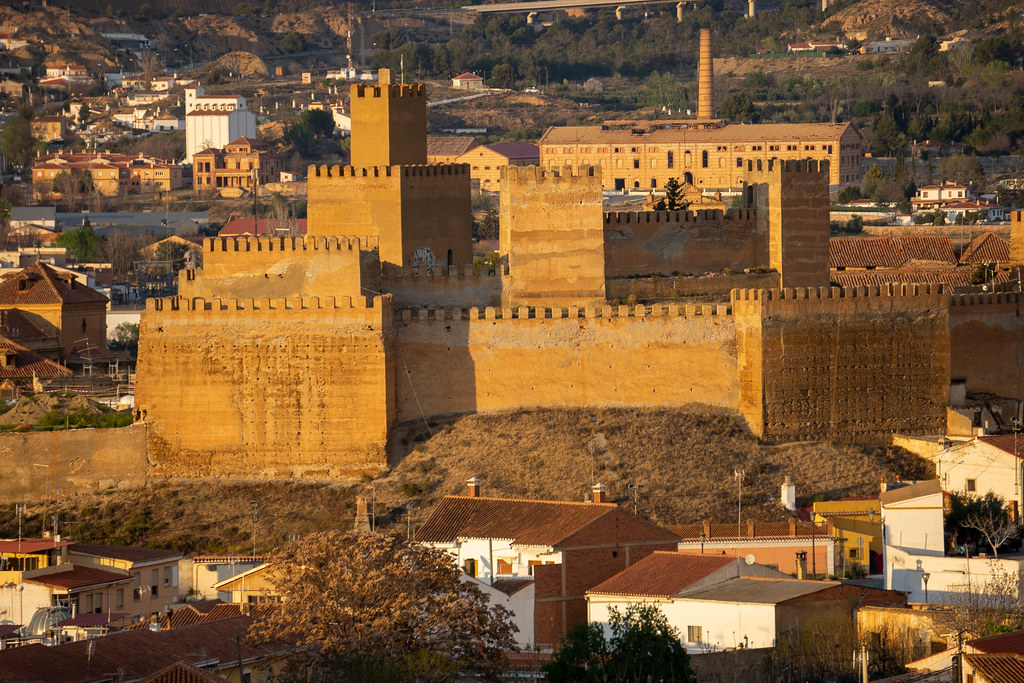 By the time I reached the Alcazaba, it was closed for renovations, so I didn’t get a chance to see it on the inside. Built in the 11th century by the Moors, on the highest hill, the Alcazaba defended and protected the city from invaders.

Check Out the Ruins of Teatro Romano 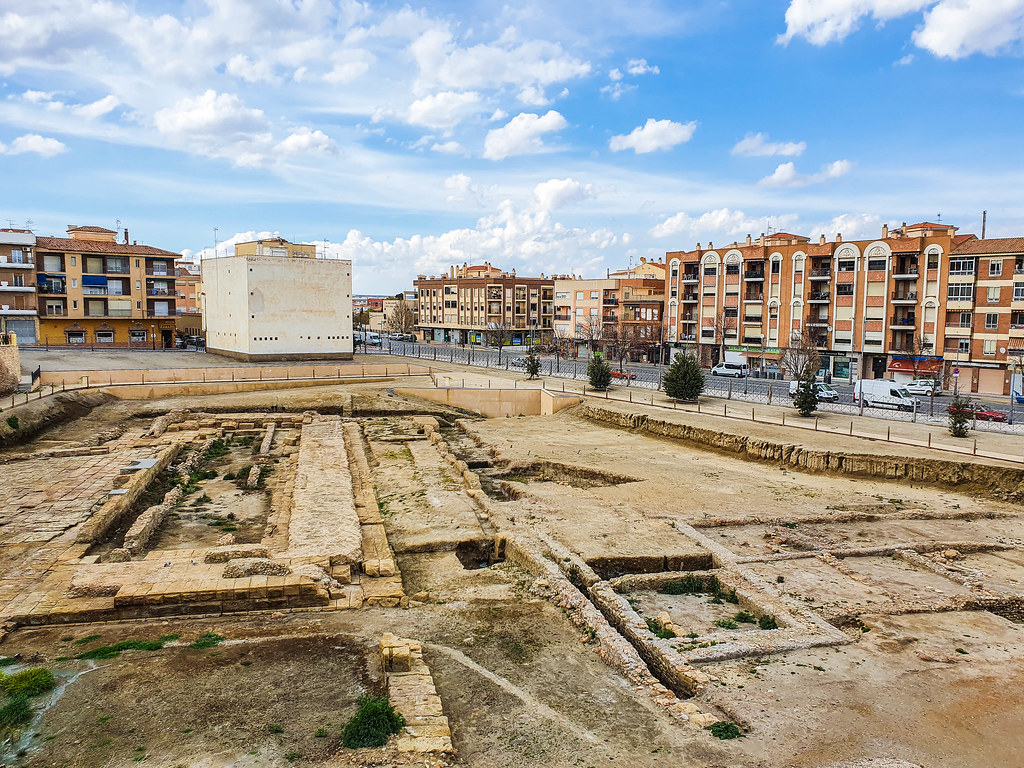 The ruins of the Teatro Romano can be seen free of charge, just behind the Cathedral. They are believed to have been built during the 1st century AD, when the city was known as Julia Gemella Acci a Roman colony founded by Julius Cesar. The stones of the Roman Theatre were used by the Moors in the 10th century to build the Alcazaba.

The ruins are the only ones in Spain that preserved the decorative paintings which adorned the proscenium. If you want to see other fantastic Roman ruins in Andalucia, you must visit Acinipo as well. 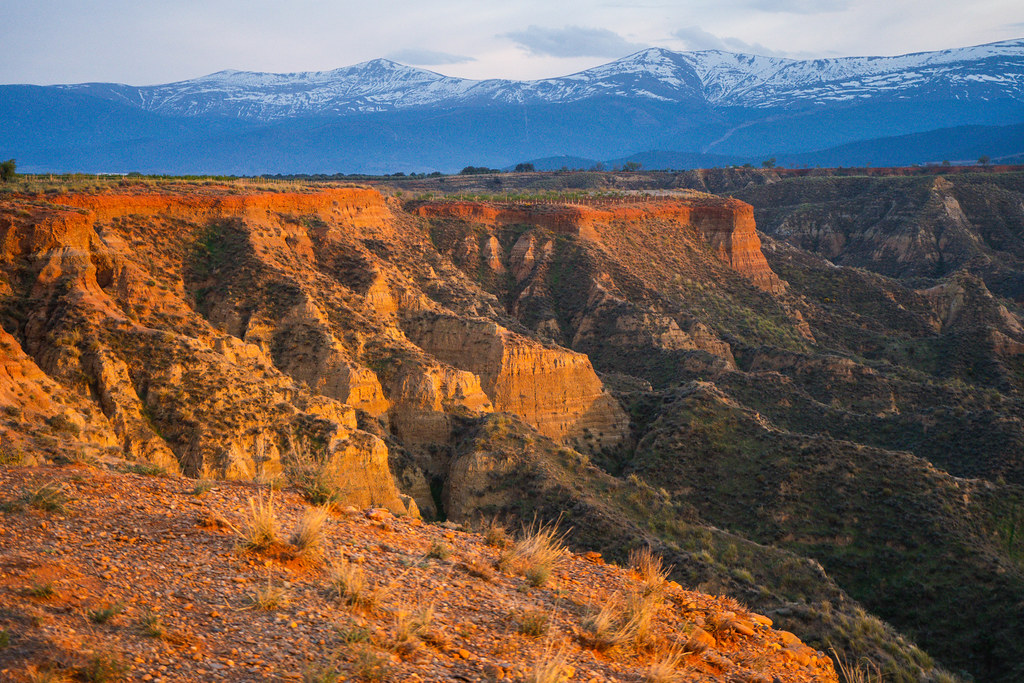 Mirador del Fin del Mundo is one of those places where you feel that you have left Earth and landed on a new planet. The landscape here is so unique, with red cliffs sharply dropping into the semidesert below, and the mighty snow-capped peaks of Sierra Nevada behind them making a perfect backdrop.

Getting to Mirador del Fin del Mundo is not easy at all. The one-kilometre path is extremely steep and will take all the breath out of you. But it’s so worth it, as once you reach the top, the 360 degrees view will leave you speechless. Coming here at sunset, when the entire scenery turns red, is even more spectacular.