The best way to enjoy a trip to Andalucia is at a slow pace. The region is so large that you will never be able to see it in one trip. So why not just enjoy moments, rather than add ticks on an infinite list of things to see and do. I love summer evenings in Andalucia. I love going to the beach in the afternoon when the sun stops burning and the temperatures become pleasant again. I pick a chiringuito on the beach, one that has plastic chairs and tables directly on the sand, and order a refreshing drink and a freshly grilled portion of espetos. Then, I watch the sun set behind the sea, whilst enjoying the most delicious fish dish Andalucia has to offer.

Andalucia has a privileged location in the South of Spain, with shores both to the Mediterranean Sea and the Atlantic Ocean. The sea provides so much fresh fish, which is sold in the local markets in the morning, and prepared in the restaurants in the afternoon. You can always be sure that the fish you are eating is fresh, and was still swimming in the early hours of the same morning.

In this article I am going to tell you which are some of the best fish dishes in Andalucia that you should order on your next trip to the south of Spain. Make notes, as you will probably want to try at least half of them! 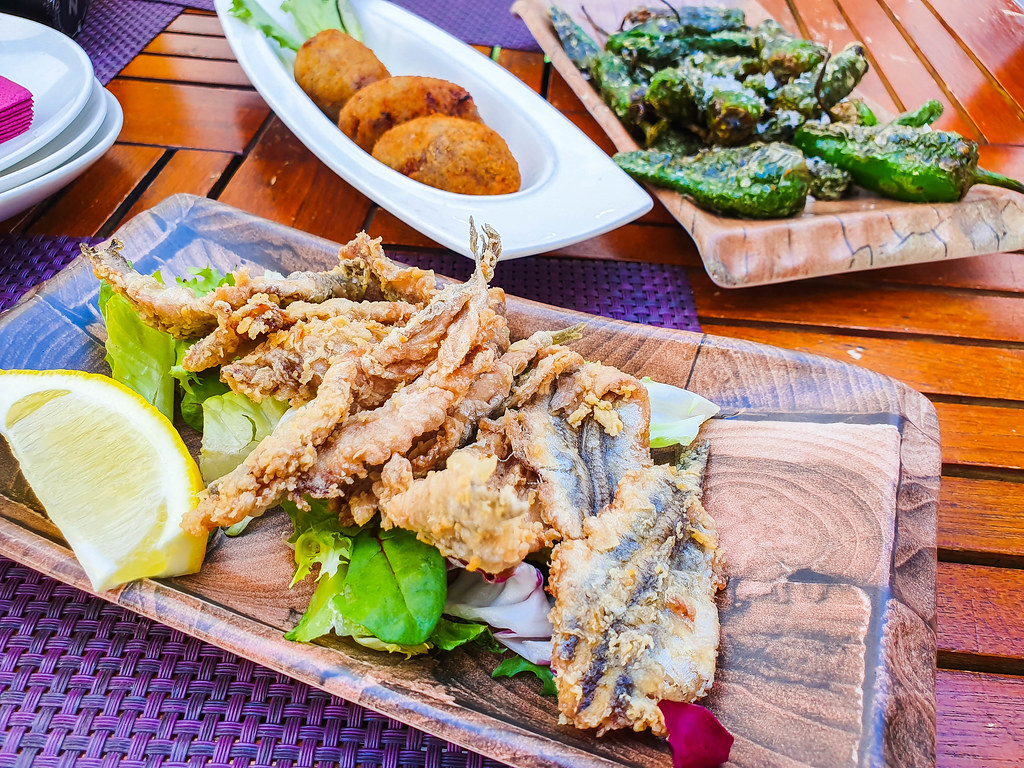 Boquerones have deep roots in Andalucia’s history. Traces of anchovies paste dating from thousands of years ago have been found in the old Roman site of Acinipo, believed to be a result of the trade with the coast. In Almunecar the Phoenicians had a massive fish salting factory where they made garum, which contributed highly to the city’s economy in those ancient times. The garum made in Almunecar, a fermented fish paste, was exported all over the Mediterranean coast as a delicacy to spread on bread and it was considered to be extremely high quality.

You can’t go to Andalucia and not have at least one plate of boquerones, either fried in lemon, marinated in Jerez vinegar or grilled over an open fire at a chiringuito on the beach. 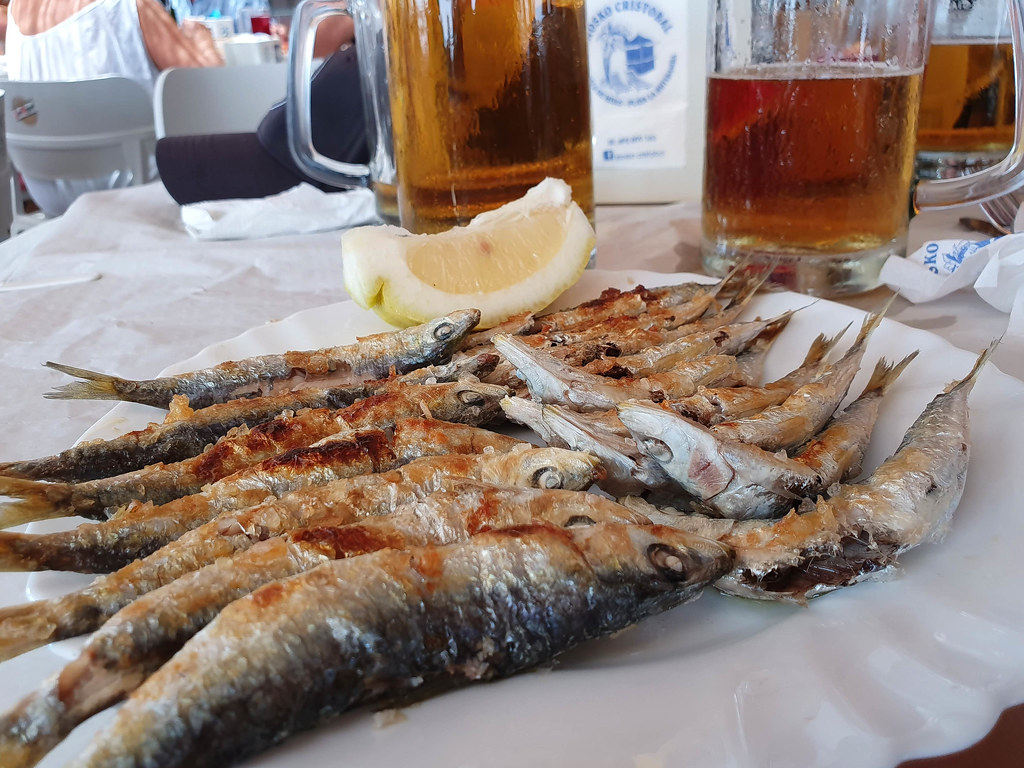 Espetos are the most popular beach snack you can get on Costa del Sol. They are delicious and you will find them at every chiringuito along the beach. Espetos are grilled anchovies, served with a wedge of lemon, which make a perfect accompaniment to a large glass of San Miguel beer.

Usually, chiringuitos will have their grills built in old boats, directly on the sand. The fish is grilled over an open fire made from olive branches. The boquerones are put on a skewer and angled at 45 degrees over the fire.

A portion of boquerones costs between 5-7 euros, depending on how many fish you receive. Normally there are between 7-10 fish on one skewer. 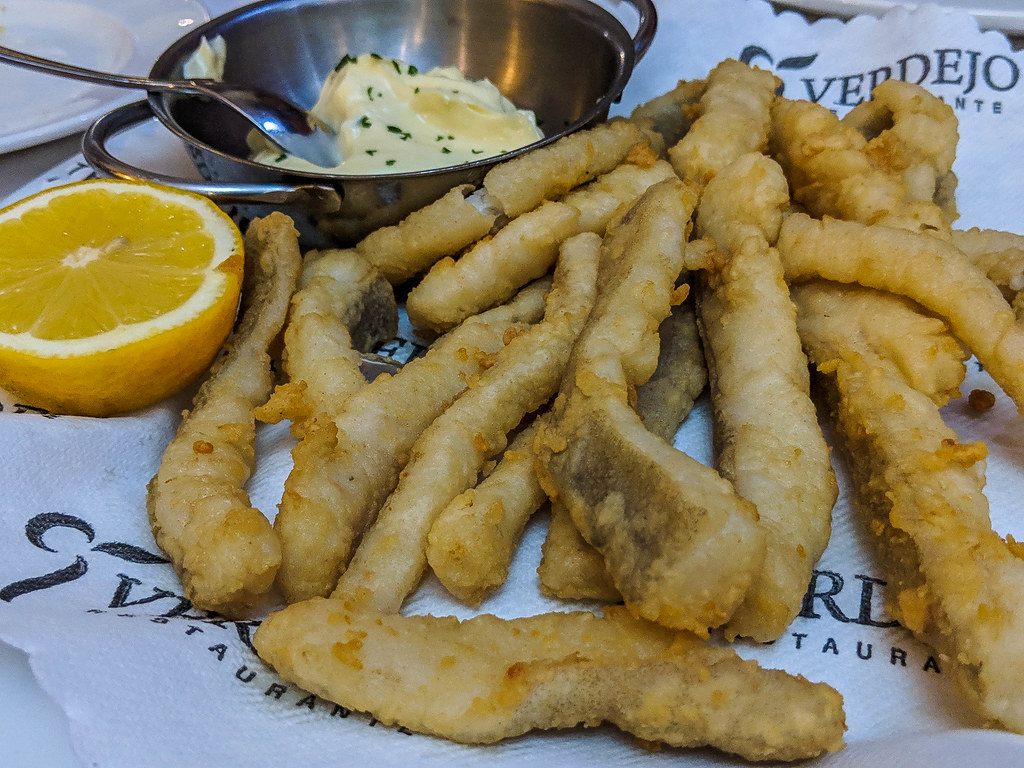 Another way to have boquerones is “al limon”. Even if the boquerón is at its heart an anchovy, it’s best eaten fresh and not preserved. This is because the boquerón is quite a big and meaty anchovy. It is native to Southern Spain, and only lives in the Alboran Sea where it has plenty of food because of the currents of the Gibraltar strait.

When you go to buy boquerones from the fishmonger in Spain, and even at the supermarket, they will clean it for you, making it so easy to cook at home.

Boquerones al limon are anchovies that have first been marinated in lemon, garlic and parsley for a couple of hours, before being passed through chickpea flour and then deep fried in olive oil. They are crunchy and have a fantastic lemony flavour. You don’t need to squeeze extra lemon juice on top. 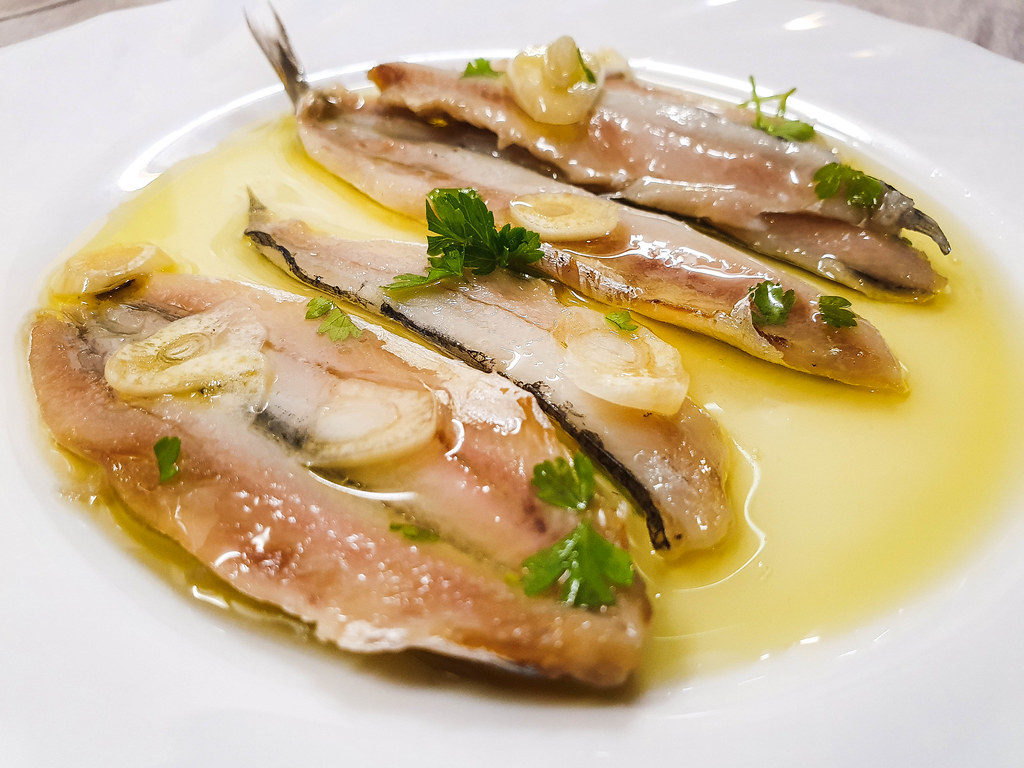 Another great tapa dish is boquerones en vinagre. In this recipe, the fish is frozen for two days before being marinated for another 24 hours in a mixture of Jerez vinegar and water. The delicate fish is then covered in garlic and olive oil. It can last for about a week in the fridge.

This dish is the most expensive out of the three using boquerones. This is because it takes quite a bit of time to make. However, the taste is fantastic. Not every tapas bar serves boquerones en vinagre so, if you see it on a menu, order it. You won’t regret it! 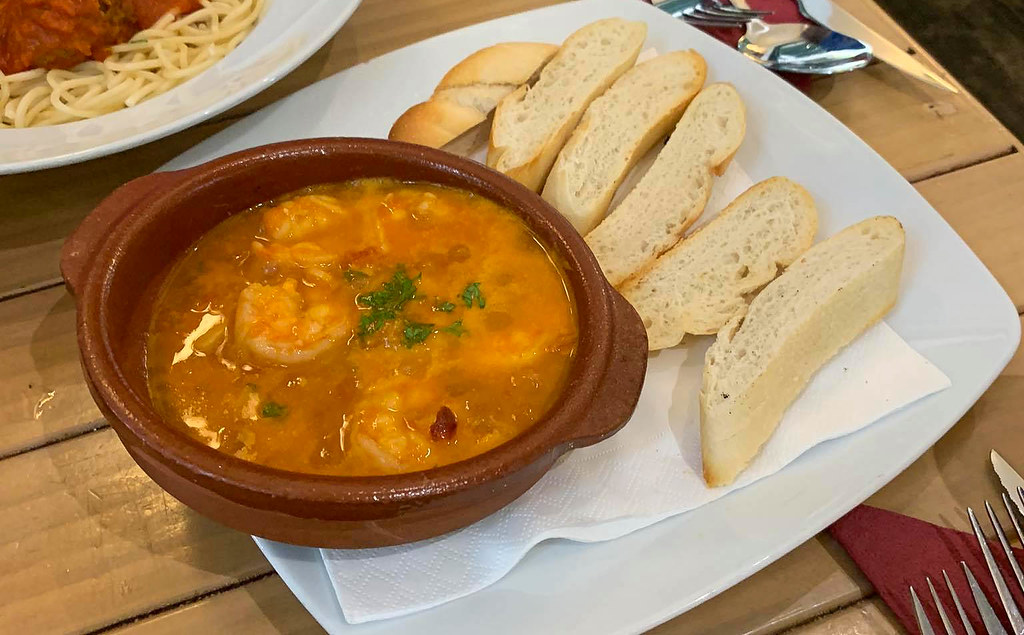 Gambas pil pil is one of my favourite tapas and I always order it if I see it on a menu. It’s such a simple dish but it has so much flavour. The main ingredient in gamba pil pil is the gamba itself, which translates as big king prawn. They are cooked in a delicious sauce made with only three ingredients: garlic, Spanish paprika and olive oil. After it’s plated, sometimes chopped parsley is added on top.

Gambas pil pil is served sizzling, in a terracotta dish, alongside crusty bread. First you eat the delicious prawns and then you dip the bread in the tasty sauce. 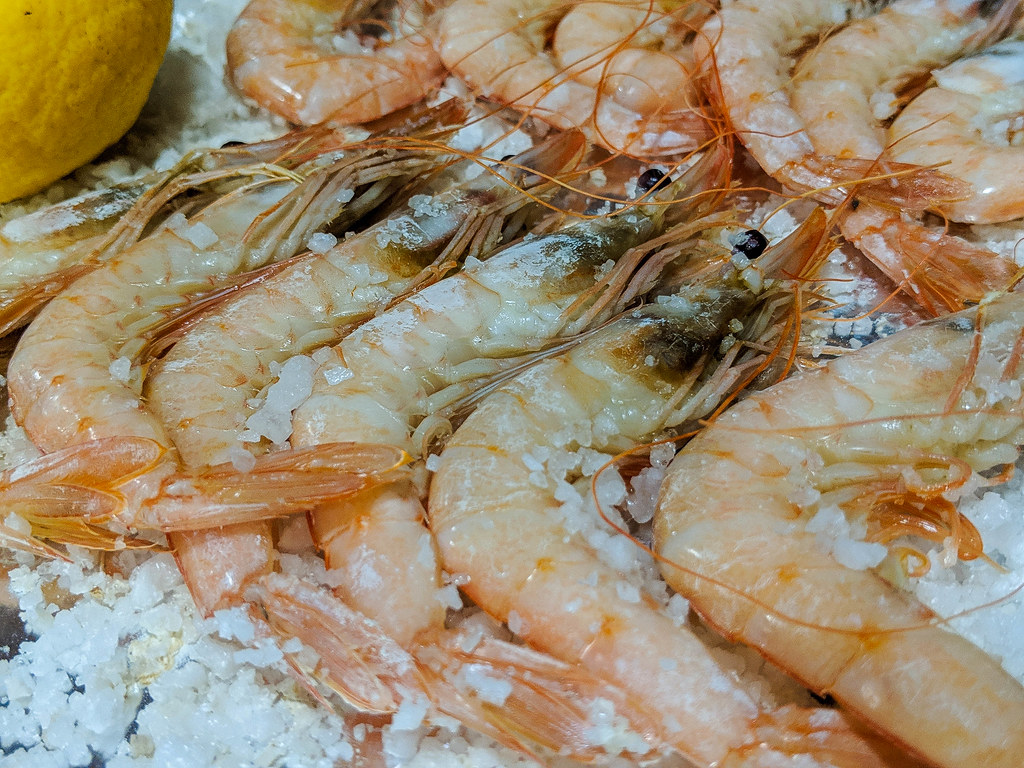 Gambas a la plancha is another way to cook prawns. This recipe celebrates the delicate taste of prawns, without adding any extra ingredients. The prawns are salted and then grilled on a flat-iron sheet in their own skin. This method of cooking keeps the meat of the prawns juicy and preserves all the flavours inside the shell.

They are served immediately after they have been taken off the grill, usually on a bed of coarse sea salt. 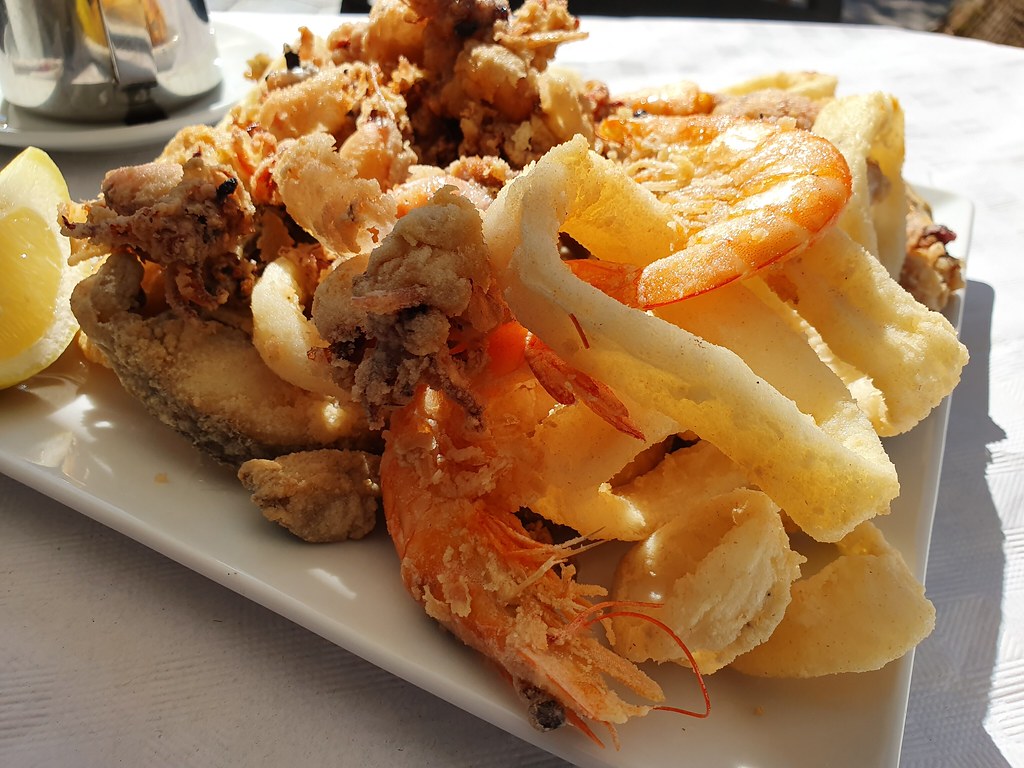 Pescaito Frito, also known as Fritura Malagueña, is a staple of Malaga and Costa del Sol. It is a dish that showcases the variety of fish living in the Alboran Sea and the olive oil that Andalucia is so proud of. The tradition of frying fish dates back from the Moorish times.

Pescaito Frito is both a street food, which you can buy in paper cones around Malaga, or served on massive platters, in restaurants. It includes fish that is small enough to be eaten without worrying about bones, but also a selection of seafood such as baby squid, prawns, or calamari. The fish is cleaned, salted and deep fried in olive oil. It is served with wedges of lemon to be squeezed on top.

Each restaurant uses whatever fish they receive in the morning from their fishmonger, so you will never know what your platter of fried fish will include. Whatever it is though, you can be sure it will be delicious. 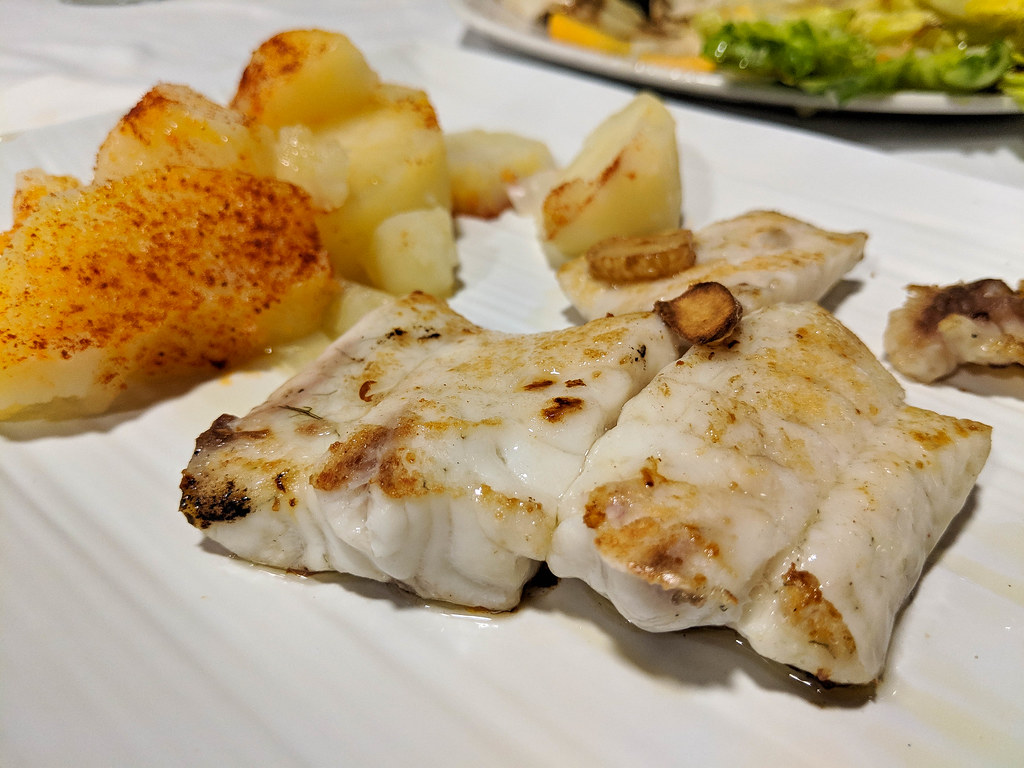 Rosada gets its name from the pink colour of the skin, and it is one of the most popular fish that you will find on the restaurant menus around Andalucia. It is a meaty white fish, with very little bones, similar to cod or hake. In fact, you will often find it translated as cod, hake and even salmon – but it’s none of them.

You will find the Rosada either fried or a la plancha. I highly recommend the latter, as the grilling maintains its delicious taste without the need to add oil. Before grilling, the fish is brushed with garlic, parsley and olive oil. It is served with a wedge of lemon and usually, chunky fries. 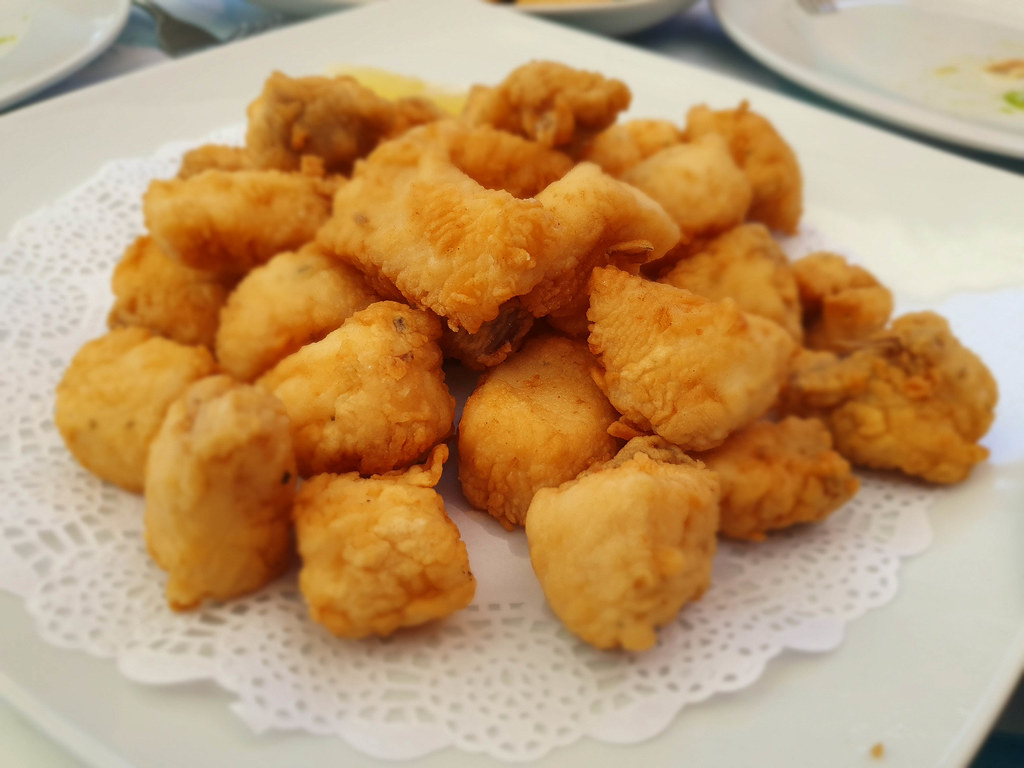 Cazón en adobo translates as ‘marinated dogfish’ and is absolutely delicious. This dish is very typical all around Andalucía, especially along the Cádiz coast. It is also known as ‘bienmesabe’, but it’s fairly rare to see it written on a menu like this.

The fish is cubed, marinated and then fried. This dish originates back to the 17th century, where the fish was marinated for the sole reason of preventing it from going bad. The fish is marinated in vinegar, water and various spices, including oregano, pimentón (Spanish smoked paprika), cumin and garlic. Order a side salad or some fries and it’s a delicious meal! 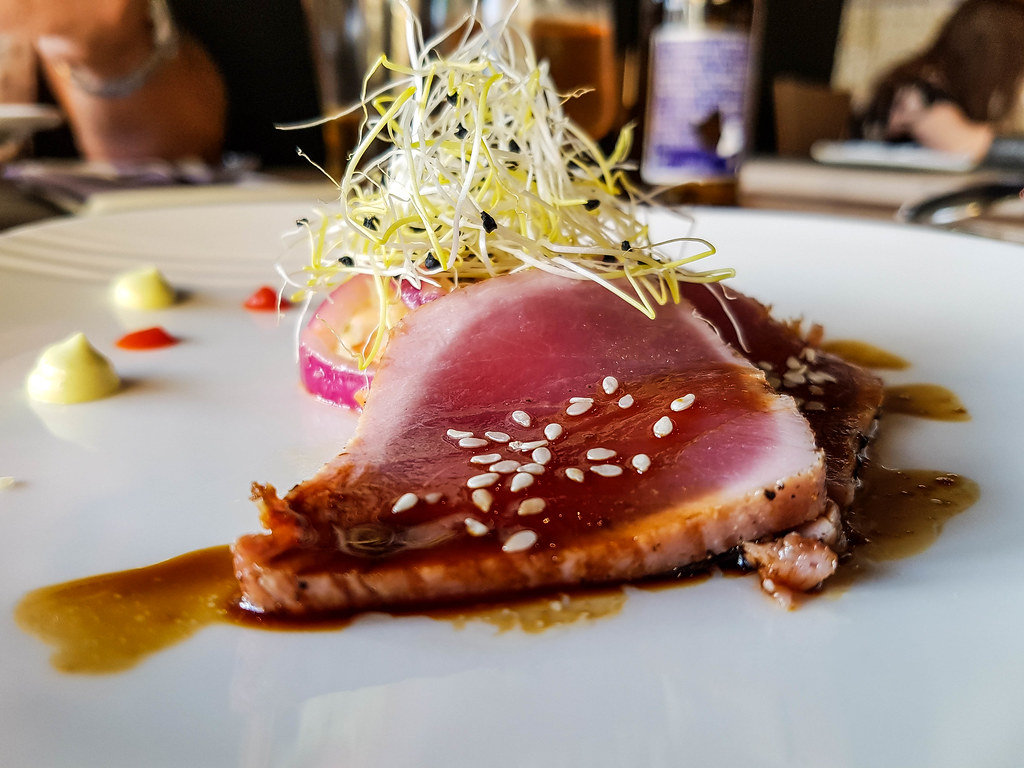 Another dish very typical to Cádiz province, atún rojo – or Atlantic bluefin tuna, but literally ‘red tuna’ – is an absolute delicacy. One of the best places to try this tuna is along the Costa de la Luz, such as in Zahara de los Atunes (the name literally means ‘desert of tuna’) or in Conil de la Frontera.

In these coastal areas of Cádiz, atún rojo is caught using a traditional method of fishing known as almadraba. The bluefin tuna fishing season starts around April or May and this is a great time to visit the Costa de la Luz for some of the best tuna you will ever eat.

The almadraba technique of fishing dates all the way back to 3,000 years ago, during Phoenician rule of the region. Today, only four places still practice this method: Barbate, Zahara de los Atunes, Tarifa and Conil. The ‘modern’ almadraba method consists of an underwater labyrinth of nets that are connected to boats. The tuna get trapped in these nets as they migrate from the Atlantic, through the Strait of Gibraltar and to the warmer waters of the Mediterranean. The nets are then lifted (known as ‘levantá’) and the tuna are captured. There are strict quotas and only tuna of a certain size are caught – smaller tuna are thrown back alive in order to prevent overfishing.

Atún rojo can be enjoyed in a variety of ways – Bar Los Hermanos in Conil offers a tasting ración which includes tuna various ways, including ahumado (smoked), mojama (dried and salted), ijada (flank) and barriga (belly). Generally speaking, barriga is the most sought after and expensive – it’s incredibly tender and completely melt-in-your-mouth delicious!

Another perfect way to enjoy atún rojo is to go to a chiringuito on the coast, such as in Zahara de los Atunes, and order barriga de atún! 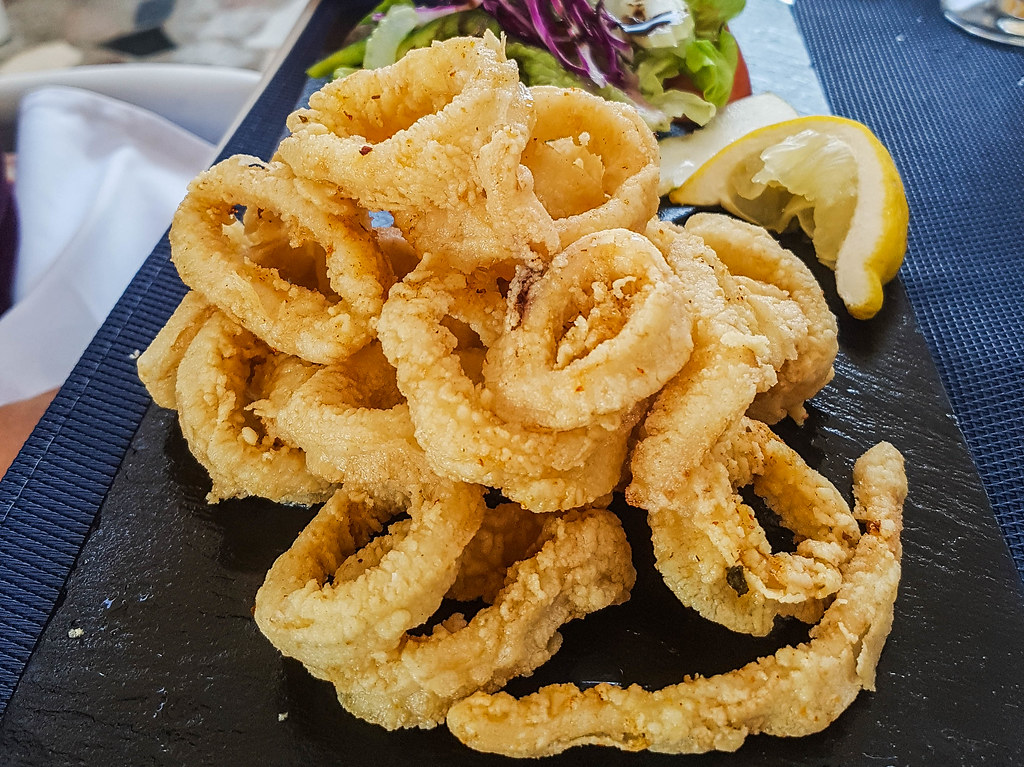 You can’t have an article about fish in Andalucia without mentioning calamares! Also known to many English speakers as calamari, these are your classic squid rings. Also very popular in Andalucia are puntillitas, or baby squid, which are sometimes referred to as calamaritos or chopitos. These are both served battered and fried and are a great addition to any fish meal. 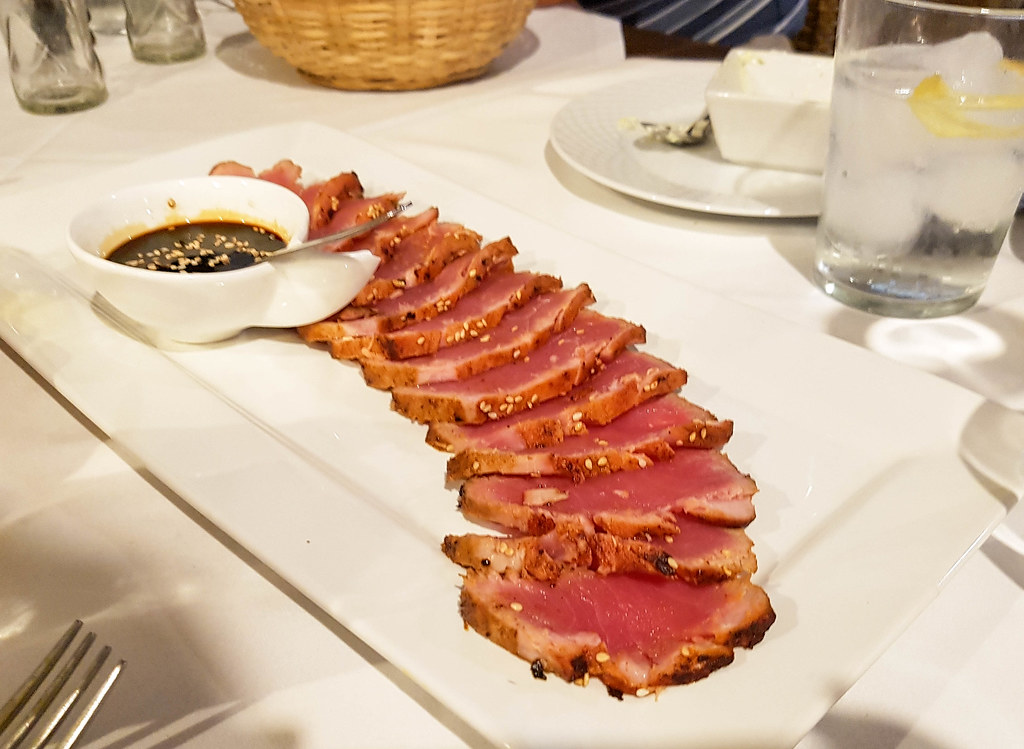 Whilst tuna tataki is not at all a traditional Spanish fish dish, it is found on plenty of menus on the restaurants on Costa del Sol. Tuna tataki is an Asian recipe in which the fresh tuna is cured in a citrusy soy sauce, which gives it a delicate flavour, and served with a ginger and ponzu sauce.

Because Costa del Sol has such fantastic fresh tuna, this dish has found its way to the local restaurants. Try it and you will end up ordering over and over.

3 thoughts on “The Best Fish Dishes in Andalucia”