I love Pimientos de Padrón, which I often order when I go out for tapas.  They are sweet, salty, soft and perfect as a snack alongside a cold beer, in the summertime when the weather reaches those scorching temperatures.

Pimientos de Padrón are one of the most popular vegetarian tapas in Spain. You will find this delicious tapa in pretty much every tapas bar in the country. The Pimiento de Padrón recipe is simple but full of flavour. Can you believe you only need three ingredients to cook Padrón peppers?

If you are craving a bit of the Spanish sunshine at home, why not make Pimientos de Padrón and serve them in your garden, together with a large Spanish beer?

What are Pimientos de Padrón? 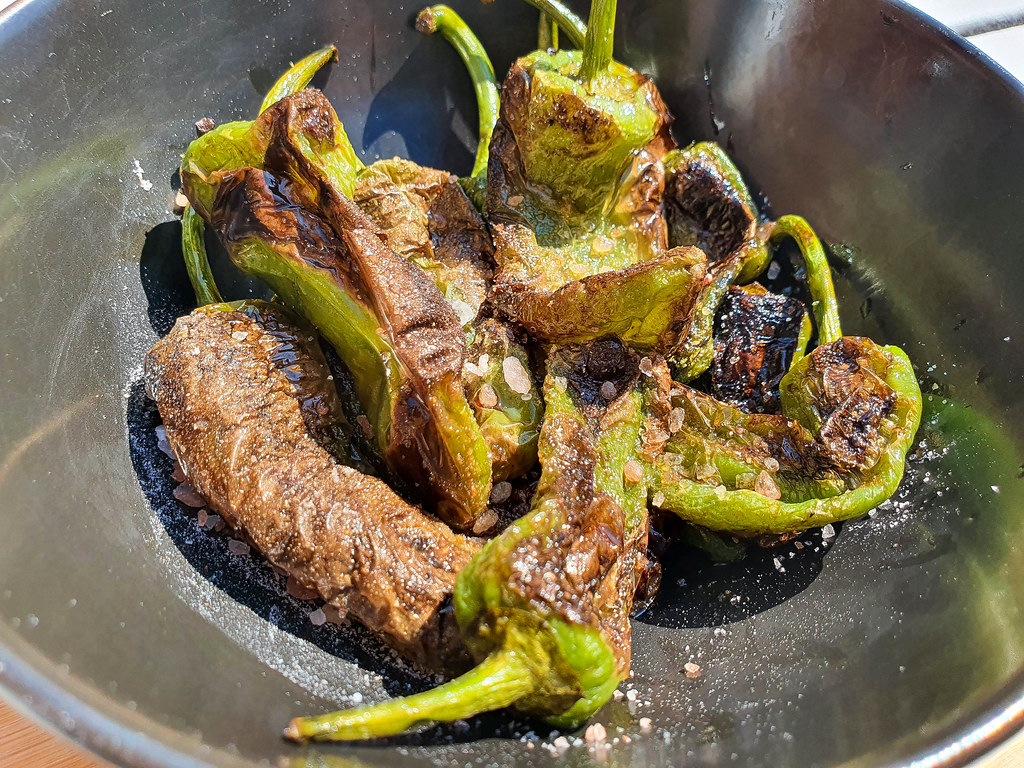 Pimento de Padrón is a small green pepper that grows in Galicia, in the Northeast of Spain. It gets its name from the municipality where it grows, which is called Padrón. Whilst most of the Padrón Peppers are sweet, about one in ten will be spicy. It’s always a gamble to eat them, and it makes a fun game when you share them with friends.

Buying Padrón Peppers Outside of Spain

As Padrón Peppers have become more and more popular over the years, you can easily find them outside of Spain. They are popular in Mexico, Australia and the States, and you can also easily find them in the big supermarkets in Europe.

In the UK they are often found on the shelves in Asda, Tesco and Sainsbury’s. The corner grocery shops are highly likely to stock them as well. 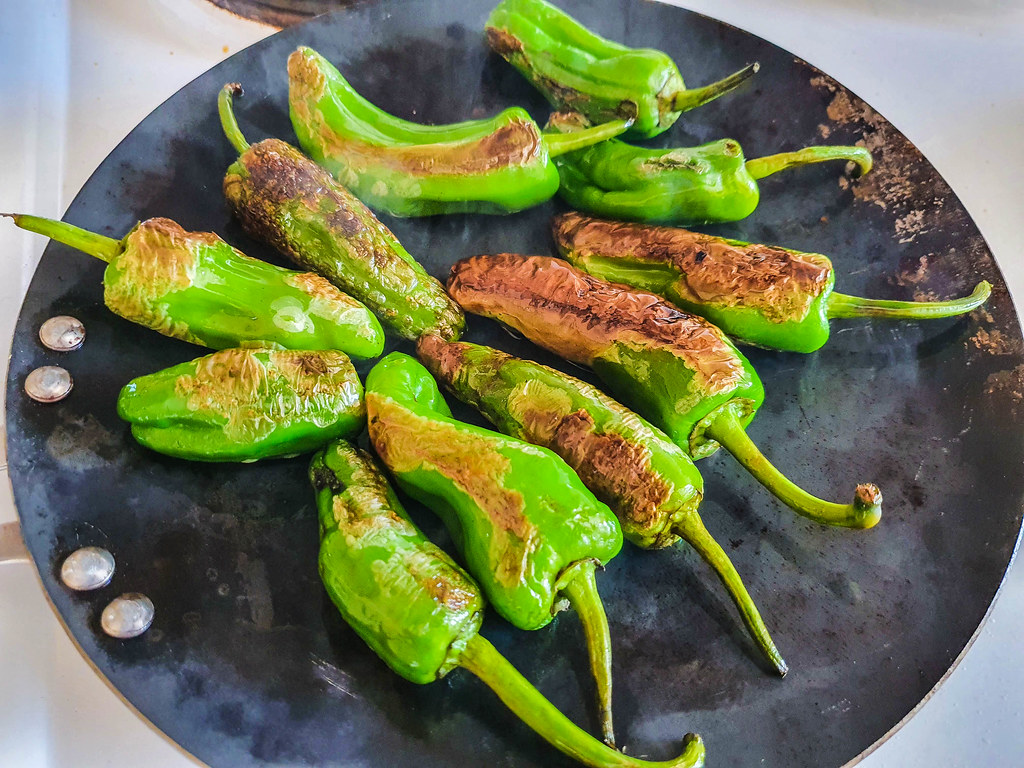 Whilst cooking Padrón Peppers is pretty straightforward, to obtain that fantastic Mediterranean flavour you need to use the right tools. Sure, you can make Pimientos de Padrón in a normal frying pan, but I highly recommend a skillet or a cast iron pan. I’ve actually made them on a chapati pan, which has a very thick bottom. For a smoky hint, you could even cook them on the barbecue, in a special pan so that they don’t fall between the rungs of the grill.

Another tip is to only use a little bit of oil, just enough to smear over the pan. It’s important to remember that for the Pimientos de Padrón recipe we are looking to char the peppers, not deep fry them. This is obtained through heat, not heaps of oil.

For the finishing touches, use good quality extra virgin olive oil. I highly recommend olive oil that has been produced around Jaén – this is the area where most of the award winning olive oils in the world come from. 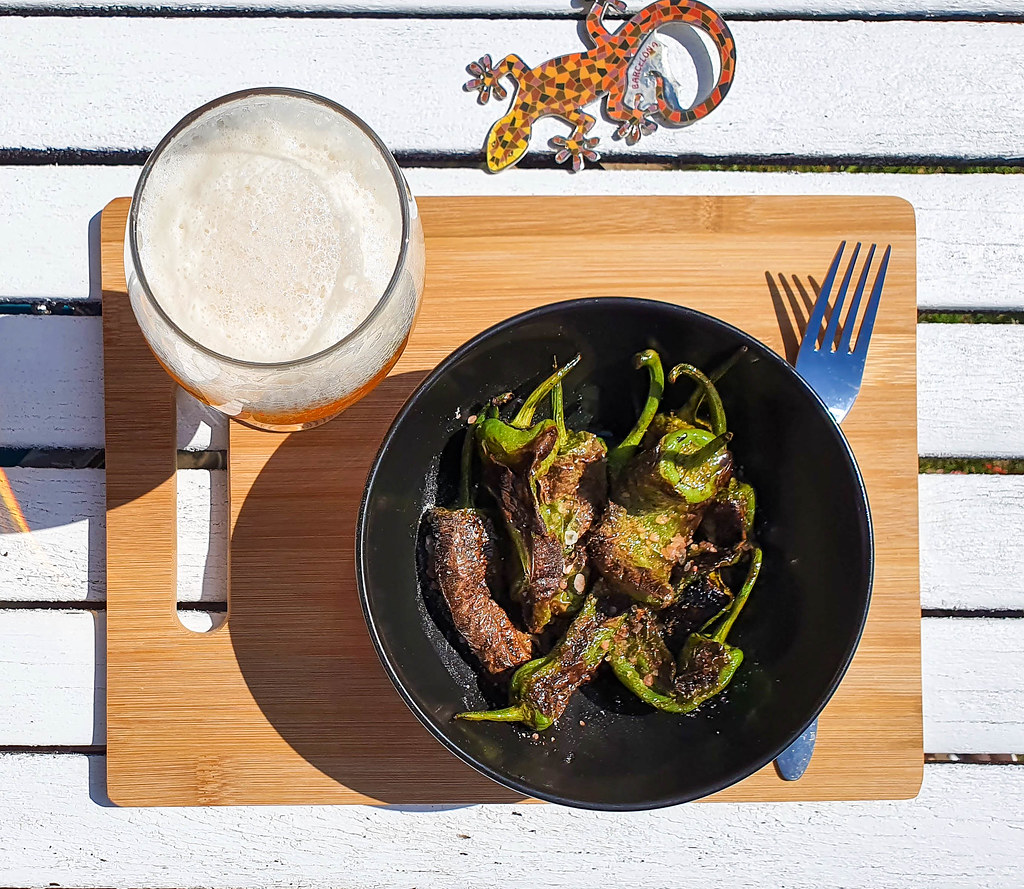 Step 1: Wash the Pimientos del Padrón and dry them thoroughly with a kitchen towel. It’s important they are completely dry when they hit the pan, otherwise they will not char.

Step 2: Brush the bottom of your cast iron or skillet pan with olive oil and wait for it to become very hot (don’t burn the oil though). Once you hear the oil sizzling, add the Padrón Peppers in the pan in one layer only. It won’t be long until they start to blister, so don’t leave them unsupervised. As they start to cook, turn them a few times until they are charred on all sides. You’ll know they’re ready when they are completely soft.

Step 3: When the Padrón Peppers are ready, take them out of the pan and sprinkle them generously with salt flakes. Drizzle a little extra virgin olive oil on top and serve whilst they are still sizzling.

For more Spanish recipes inspiration check out my other posts on:

Pimientos de Padrón are one of the most popular tapas in Spain. A delicious easy recipe that will bring the Mediterranean flavours to your table.