Cadiz is without a doubt one of the most beautiful and unspoiled regions of Andalucia. Home of the Spanish Navy since the 18th century, Cadiz has the distinction of being one of the oldest continuously inhabited cities in Western Europe. There are many wonderful things to do in Cadiz, as well as around it. In this article, I will tell you how to take some amazing day trips from Cadiz to wonderful places that will satisfy even the pickiest traveller.

The harbour of the Bay of Cadiz enjoys an exceptional location that facilitates the flow of maritime traffic between North Africa and the Atlantic, making it an important cruise tourism hub. Moreover, as the port is integrated with the city, the walking distance between the cruise passenger terminal and the city centre is a mere five minutes.

This also makes Cadiz a great point to embark on a European repositioning cruise, which typically costs half the price of the regular cruise fare. This happens when the cruise lines, in order to offset the cost of shifting their ship from Cadiz harbour to their home port, offer large discounts over the long Atlantic crossings, at the end of every cruising season.

While the province of Cadiz is full of wonderful towns and villages, there are some really good day trips from Cadiz that offer mind-blowing ocean views, historical sites and pristine beaches which must not be missed. 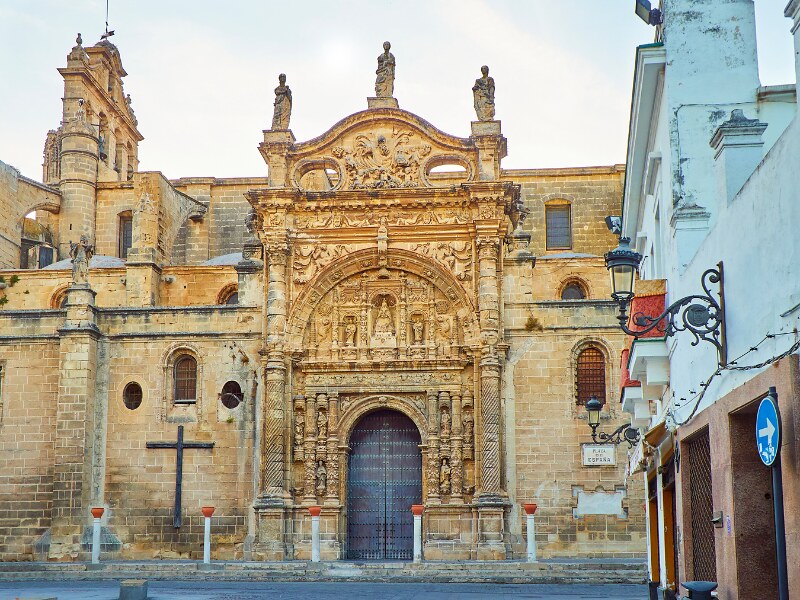 Although one can cover the 29km distance to El Puerto de Santa Maria by driving in just thirty minutes, a ferry ride provides excellent views of Cadiz and the Constitution Bridge, especially from the top deck.

Once there, you will be charmed by the many bars and restaurants the town is full of. Though there are a few monuments and historical buildings, the best one is Osborne Bodega, the venue for hen and stag parties. The beaches at La Muralla and Valdelagrana offer good respite on a hot summer day. 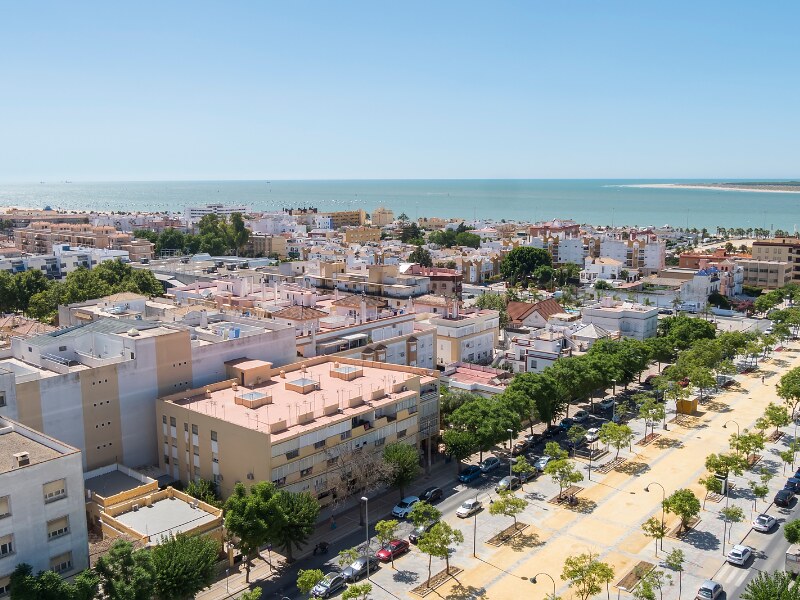 Known for its famous horse races which are run annually on the beaches of  Sanlucar de Barrameda, this town which rests on the northern point of the sherry triangle is also famous for its aromatic white manzanilla wine. Barrameda is an Arabic word meaning ‘sandy gateway’ alluding it to the sandbank constructed to control the waters of the Guadalquivir river which runs through the town.

Sanlucar is also a popular seaside resort on the Costa de la Luz also known as Coast of Light and is situated 8 km away from the nearest town Chipiona. The delightful town, apart from the famous wine, is also known for its excellent seafood for which incidentally the manzanilla serves as an ideal accomplishment. 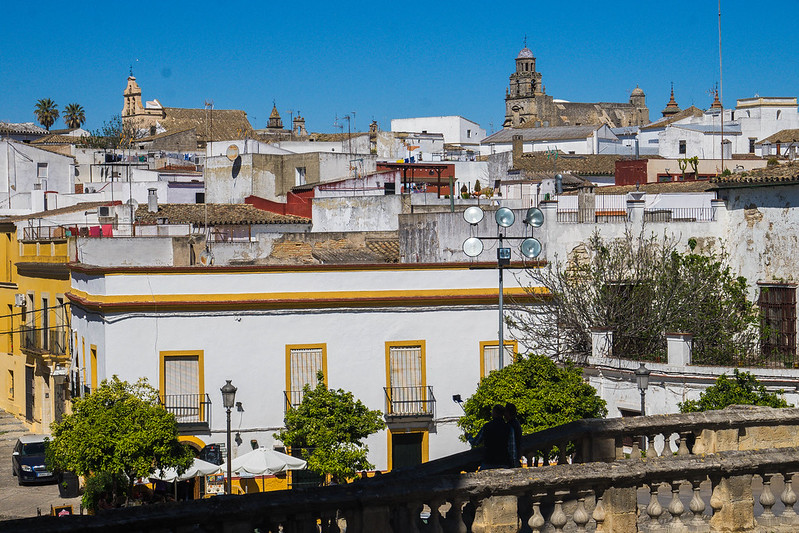 Apart from being known as the sherry capital of Andalucia, there are hosts of other attractions in Jerez de la Frontera. This wonderful town is all about quaint narrow streets and beautiful churches and not to be missed sherry bodegas around every corner.

Far from the madding crowds of Cadiz, Jerez de la Frontera is home to over 200 convents and churches that can be explored in relative peace. To enjoy the town’s culture, spend time having tapas and a drink at any of the local bars. For more things to do in Jerez de la Frontera, check out my article here. 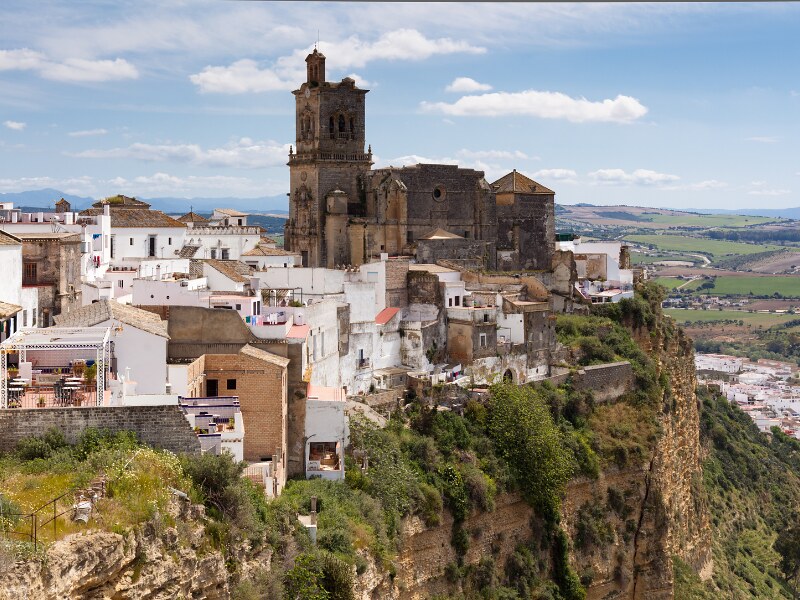 This stunningly beautiful whitewashed village is only a short 40 minutes drive by car from Cadiz and is dramatically perched on a hilltop. The highlight of Arcos de la Frontera is undoubtedly the Minor Basilica of Santa Maria, located on the main Plaza del Cabildo.

If you climb up to any of the lookouts on the opposite side of the square, you will get astounding views of the surrounding countryside from the top of the cliff. Enjoy a tapas and a drink as you walk up the historical route past historical buildings and medieval churches. 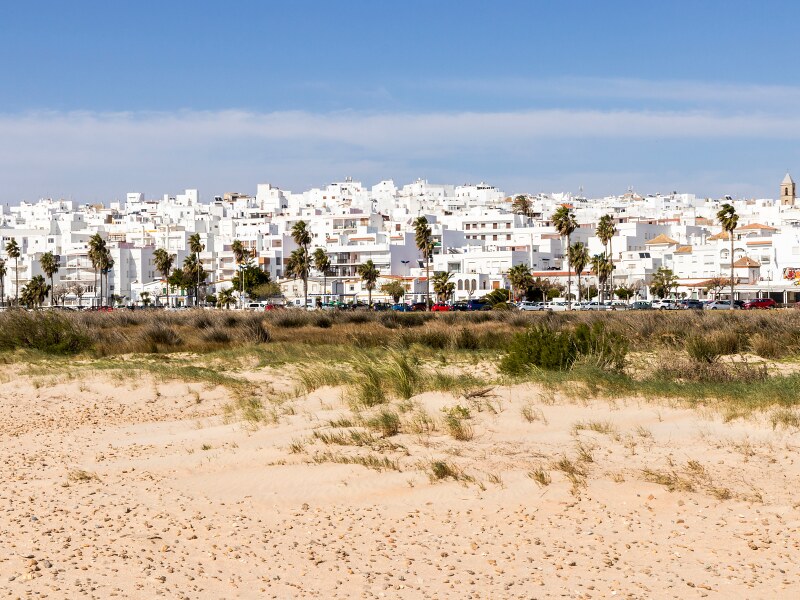 The laid-back fishing village of Conil de la Frontera is another place where you can spend the better part of the day on a trip from Cadiz. If you are a beach bum, the two stretches of sand at La Fontanilla and Cala de Roche will leave you mesmerized.

As you drive up the road from Conil de la Frontera, you will be rewarded with great views of steep rugged cliffs, dropping almost vertically into the waters of the ocean. With a long chequered history of defending the coast from pirates and other raiders, Conil de la Frontera is one of the prettiest towns in Andalucia. 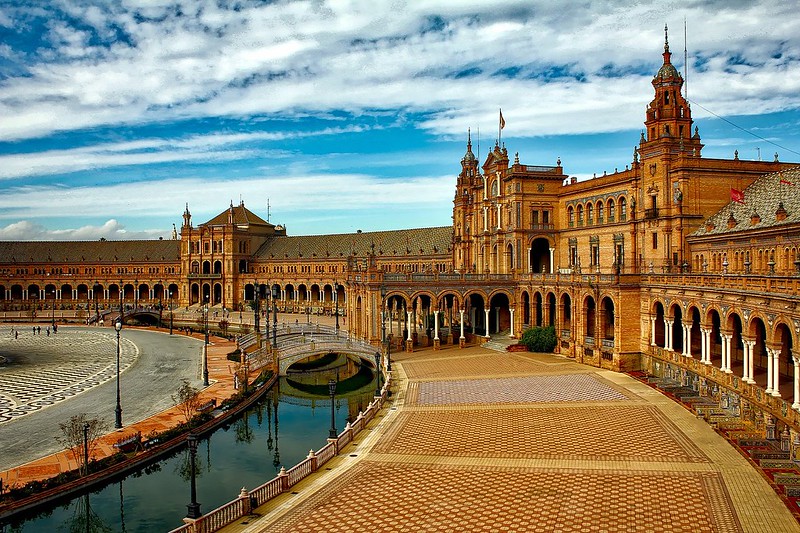 Seville lies about ninety minutes away from Cadiz, either by car or train, and the Andalusian capital has to be on your Spain itinerary, even if it is just for the day. Most of the major attractions in Seville like the Cathedral and Alcazar are concentrated in one area, which makes it easy to do a day trip from Cadiz.

To make the most of your trip, before returning to Cadiz, take time out to have an early dinner combined with a flamenco show at any of the good bars situated in the Triana neighbourhood. Make sure to book your skip-the-line tickets to the main attractions in advance to make full use of your day in Seville. 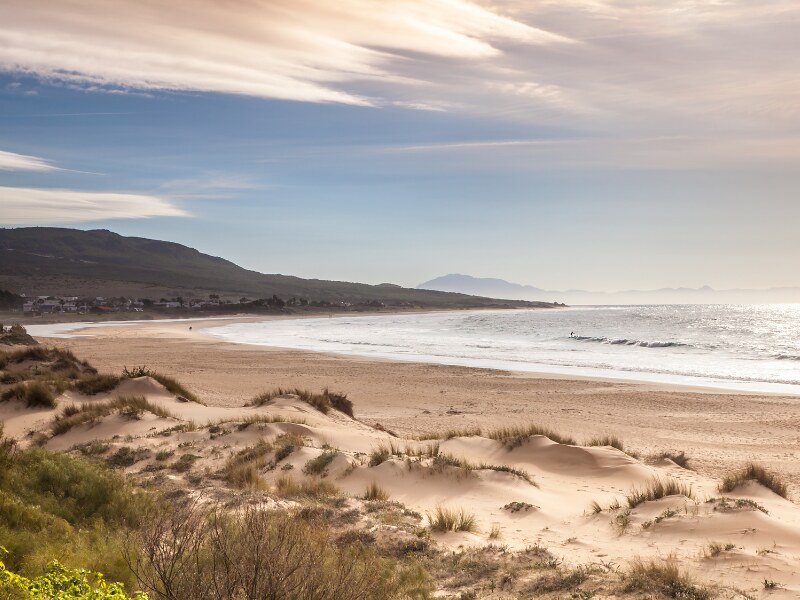 Playa de Bolonia beach forms a part of the El Estrecho Natural Park which ensures the preservation of this stunning 4 km long and 70 m wide beach. The natural movement of the dunes here due to the action of the wind provides incredible views against the backdrop of the ocean. On a clear day, one can see as far as Morocco on the other side. Playa Bolonia is considered one of the best beaches near Cadiz.

The coastal village of Playa de Bolonia lies in the municipality of Tarifa, in the province of Cadiz, in the southern part of Spain. It is situated on the shores of the Atlantic Ocean, around 23 km west of Tarifa and has some of the clearest waters in the region. 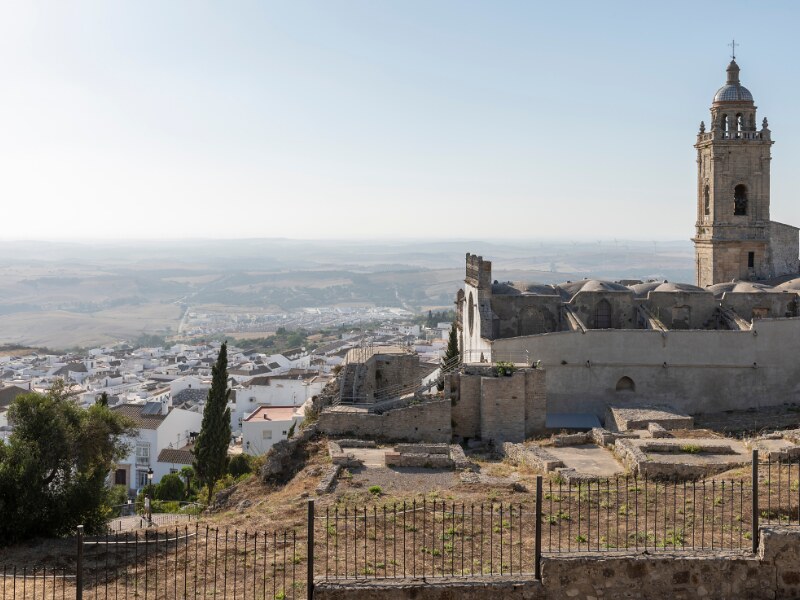 Spain, especially Andalucia, is known for its picturesque whitewashed village and not surprisingly Medina-Sidonia ranks high on this list. Due to its convenient location, it offers the day-tripper from Cadiz a traditional old Andalusian town experience, with the striking Plaza de Espana garnering all the limelight.

A bit off the square is the Town Hall building, dating back to the 17th century with an extremely impressive renaissance facade. Don’t forget to have a meal at La Vista Medina, where you can enjoy breathtaking views from the terrace as you sample the local cuisine. 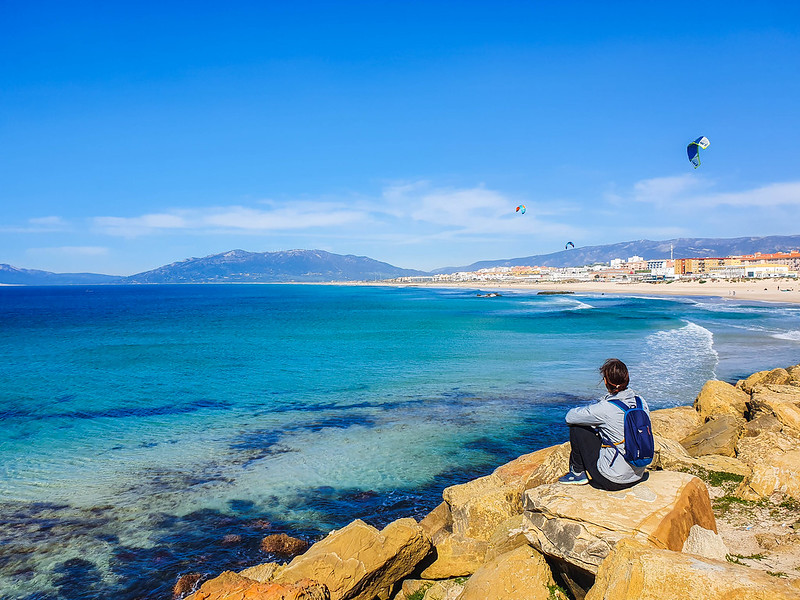 Located at the confluence of the Mediterranean sea and the Atlantic Ocean, the pretty town of Tarifa is known for its beautiful beaches and sublime climate, completely different from other Andalusian towns. Tarifa is also a mecca for watersports enthusiasts who flock here for kite surfing and windsurfing from all corners of the world.

The Arabic architecture which influences Tarifa can be clearly seen in the Santa Maria Church and the town’s narrow streets and winding alleys. Tarifa is also known for its world-class beaches, with famous ones like Los Lances and Playa Chica to name a few. 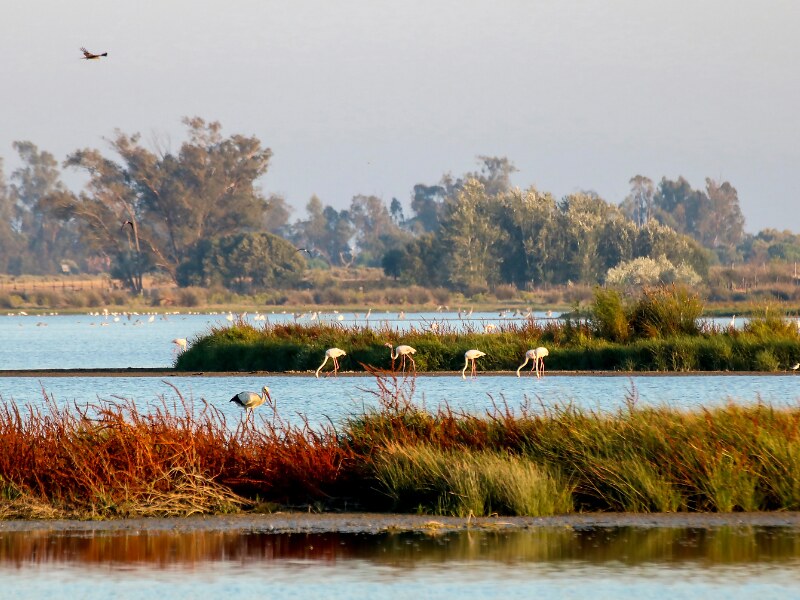 Fifty minutes north by car from Cadiz, via the town of La Algaida, lies one of the best national parks in Spain, The Doñana National Park, home to some of the most diverse flora and fauna to be found in the country. The park is best visited by cycling or on foot in order to catch a glimpse of two of its most famous residents, the Spanish Imperial Eagle and the Iberian Lynx apart from being a hotbed of migratory birds.

The UNESCO listed wetlands form one of the most unique ecosystems in Europe, and should be best visited by a private operator from Cadiz with an expert guide. Birds watchers, in particular, can spot a range of species like the marbled duck and greater flamingo while walking on the quiet roads and walking trails. 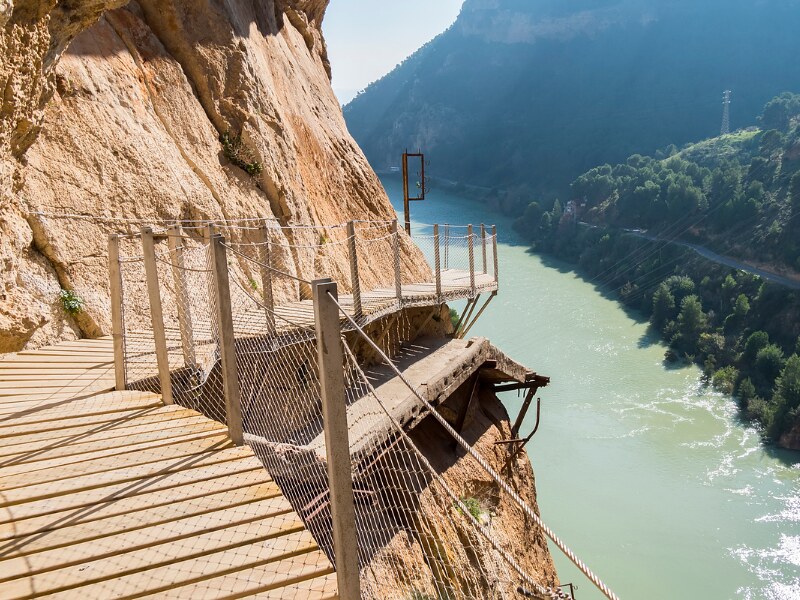 The Caminito del Rey is a unique and popular tourist attraction in the whole of Europe and lies about 40 km inland from Malaga city. Touted once as the scariest path in the world, it takes the visitor around three hours to cover the 8km stretch. Also known as the ‘Walk of Death’ due to several fatalities in the 90s, the Caminito today is a perfectly safe hike that can be undertaken by anyone.

Visitor numbers are limited to 100 every half hour in order to keep the walkway crowd-free. Though standby tickets are available, since you are coming from Cadiz it is recommended to purchase them online in advance for the date and time of your walk. Note that tickets sell out very fast and should be booked at least two months prior to the date. It is better to go through a tour provider as they have separate allocations.