Seville is a beautifully historic city in the south of Spain. Originally founded as a Roman city, and later a Moorish capital, Seville boasts a gorgeous Gothic cathedral, Mudejar palaces, and narrow medieval lanes. It was a powerful 16th century trade centre, and today is the capital of the Andalucia autonomous region of Spain. With its history, charm, and energy, Seville is a must see in any Spain itinerary. Here are my tips for the top things to do in Seville.

How to Get to Seville

Seville is very well connected to the rest of Spain and into Europe. The best way to get to Seville from outside of Spain is to fly into San Pablo Airport, the main airport for the city, or possibly Malaga, the main airport in Andalucia. San Pablo Airport is one of the many bases for low-cost carriers Vueling and Ryanair. To get to Seville from another Spanish city such as Madrid, Cordoba, Granada, Cadiz or Jerez de la Frontera, you can take the Renfe AVE high-speed train. If you are travelling on a budget, there are buses that connect Seville with other cities in Spain.

Where to Stay in Seville

If you are travelling with friends, a great way to share the costs and find a fantastic place to stay in the centre of the city is opting for a self catering in Seville. There are plenty of apartments and villas that can fit any budget and requirements.

Budget: This trendy guesthouse is just a short walk from the cathedral. Its modern, airy interiors are perfect for a traveller on a budget. A small continental breakfast is included. Check out the reviews on TripAdvisor or click here for the latest rates on Booking.com

Mid-range: Casa de Colon is a modern, spacious hotel within a restored colonial building. It is a minute walk to the cathedral. Breakfast is not included. Check out the reviews on TripAdvisor or click here for the latest rates on Booking.com

Luxury: One of the grandest hotels in the city, the Hotel Alfonso offers guests opulent rooms and five star service. Check out the reviews on TripAdvisor or click here for the latest rates on Booking.com

Things to do in Seville: 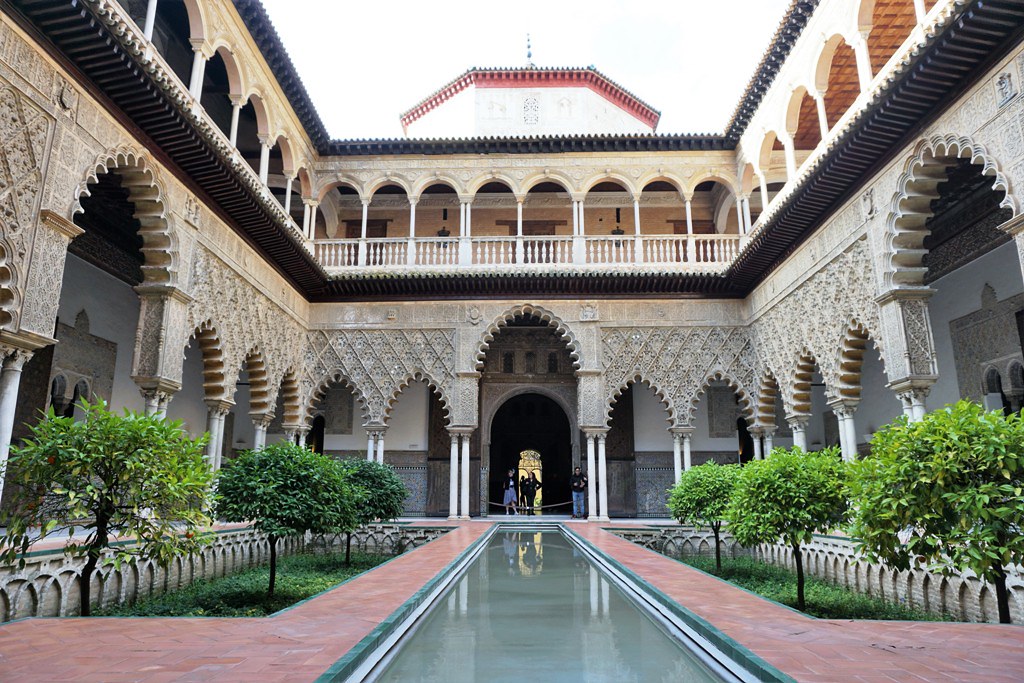 The Royal Alcázar of Seville, a UNESCO World Heritage Site, is one of the most impressive castles in Spain. It was built for Peter of Castile in the 14th century, though it was built on a former Moorish palace, which was built atop earlier Visigoth and Roman construction. Under Ferdinand and Isabella, the palace was extended into the main residence of the monarchs; the Spanish royal family still lives in the Alcazar when they are in Seville. The palace has a wide variety of architectural styles due to its 500 years of construction. Islamic decoration and ornamentation is widely used, but there are elements of Renaissance, Gothic, Romanesque, and Baroque. The Alcazar faces the cathedral, in the heart of the city, and is a must see while in the city. 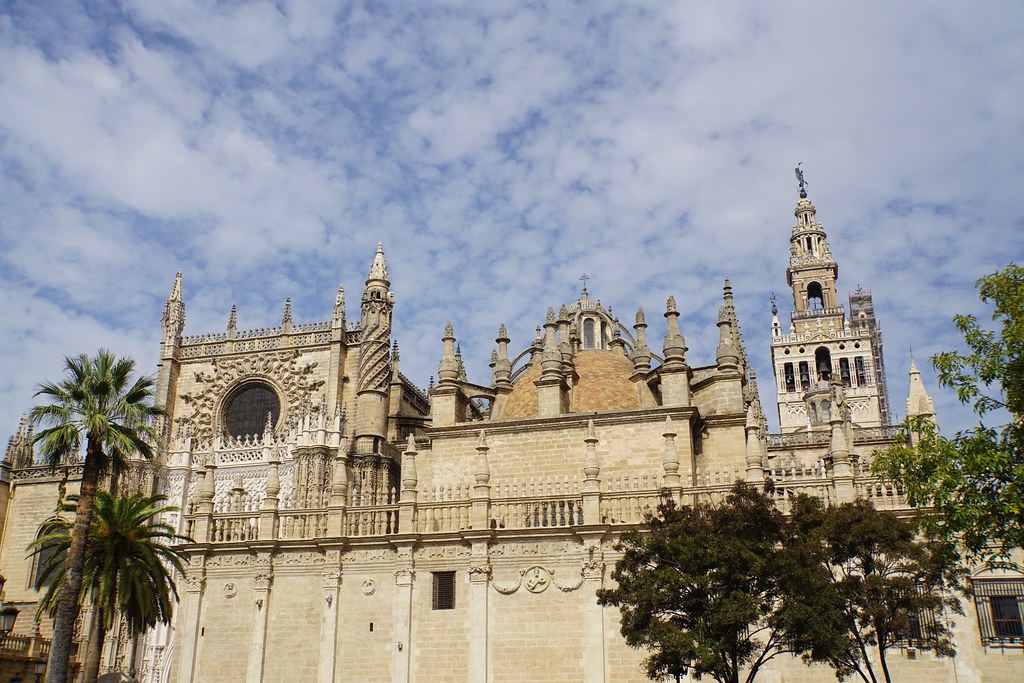 The Seville Cathedral, or the Cathedral of Saint Mary of the See, is adjacent to the Alcazar complex. It is the fourth largest church, but the largest Gothic cathedral, in the world and is the burial site of Christopher Columbus and his son Diego. The cathedral was built in the 15th century, to demonstrate the city’s wealth, but it was built on to the original Almohad mosque (12th century) and the later mosque-turned-cathedral. There are still elements of the ancient mosque, including the sahn (courtyard) and the minaret. 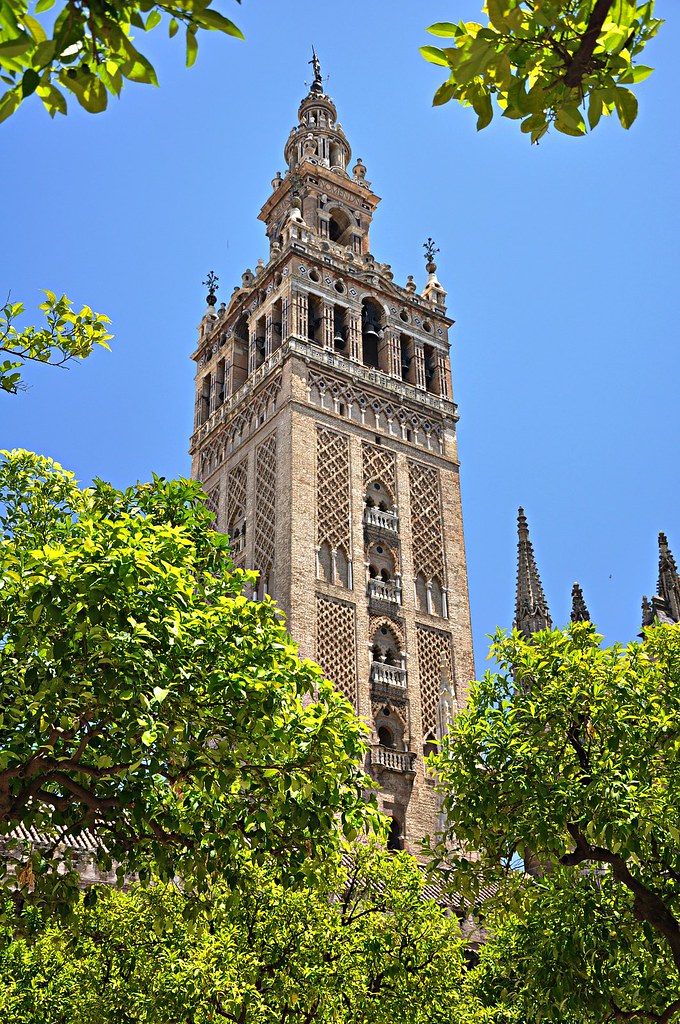 The Giralda is most famously known as the bell tower of the cathedral, however, it is also the former minaret of the mosque that stood on the site of the cathedral. It was built in 1184, and resembles the minaret at the Koutoubia Mosque in Marrakech. Visitors can climb to the top of the belltower by walking up ramps that were used by officials who rode their horses up the tower.

Walk Around the Santa Cruz Neighborhood 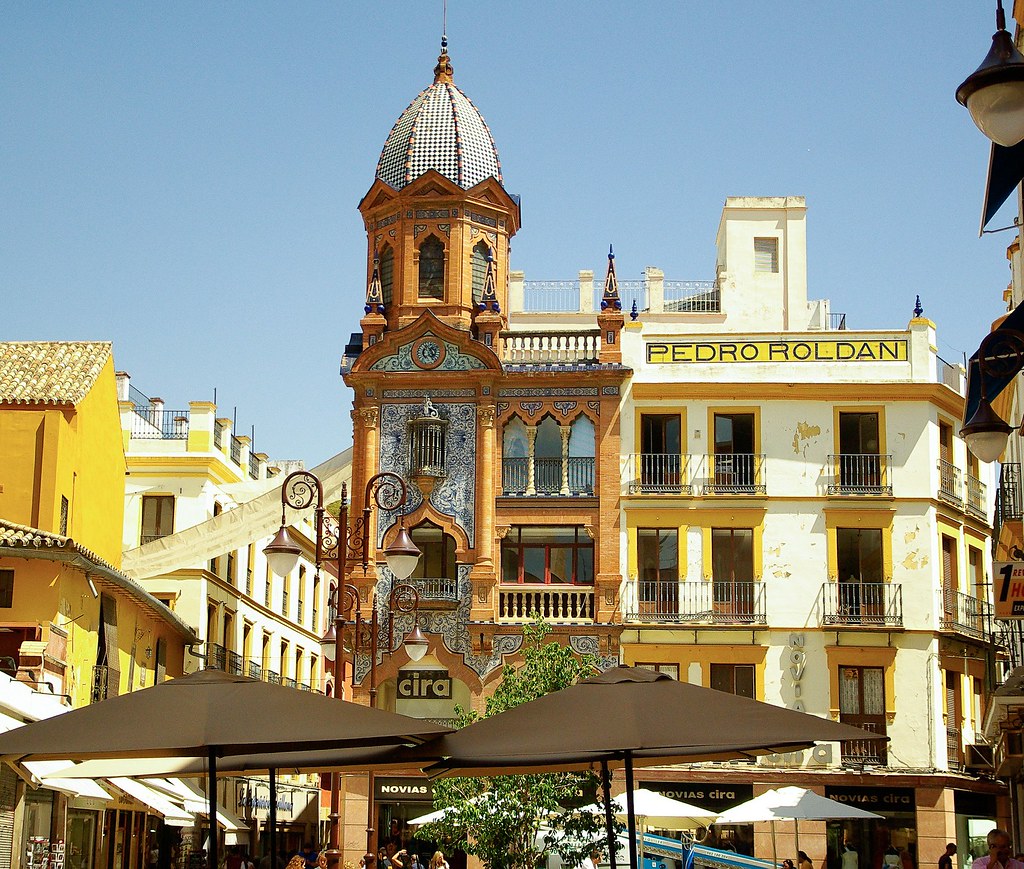 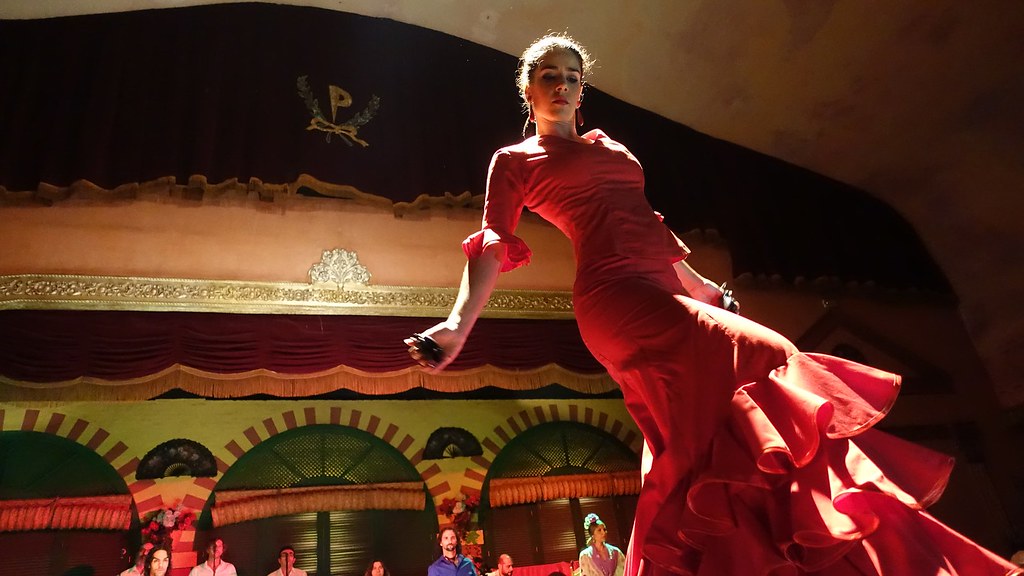 Seville, and more broadly Andalucia, is the birthplace of flamenco. Although no one really knows exactly where it was born, it developed as a way for the gypsy community to express themselves, notably in the Sacromonte neighbourhood of Granada. It is a flamboyant, passionate dance, and it is the duende, or the spirit of the performance, that makes it so captivating. There are many great places in Seville to watch a flamenco show, but some of the best are in the local bars, also called penas. Be sure to watch a performance at least once! 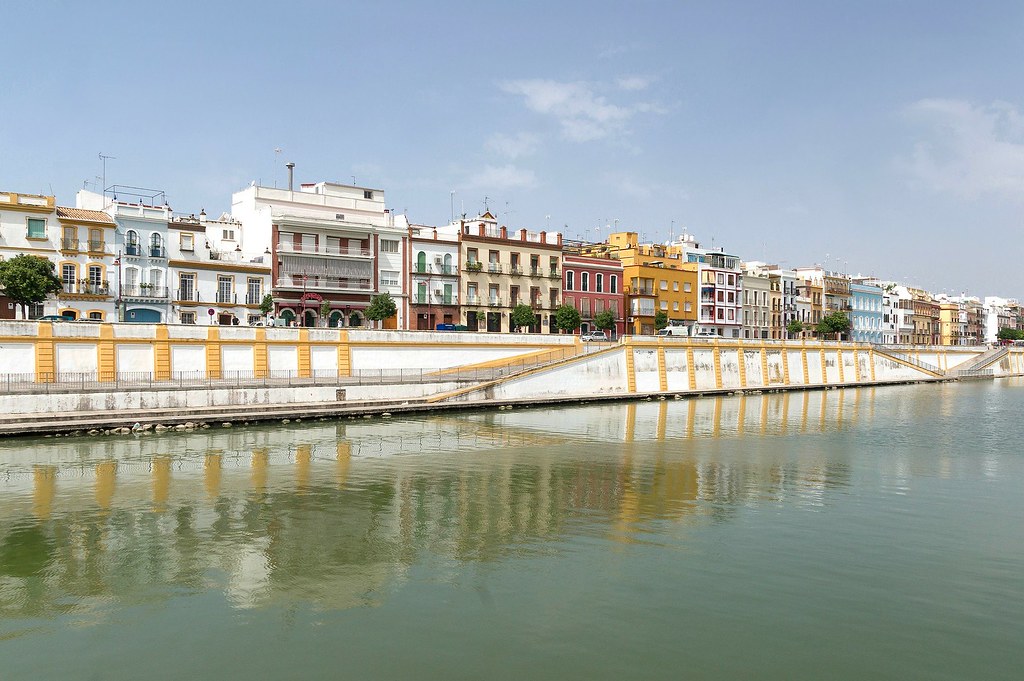 Guadalquivir comes from an Arabic word meaning “the great river,” and ironically this seems to fit. The river is second longest in Spain, but it is the only great navigable river in Spain, from the Gulf of Cadiz to Seville. It’s very easy to find a local guide and boat for a private cruise, or you can jump on one of the many tour boats crusing along the river. Sights you can view from this unique vantage point include the Torre del Oro and Triana Bridge. 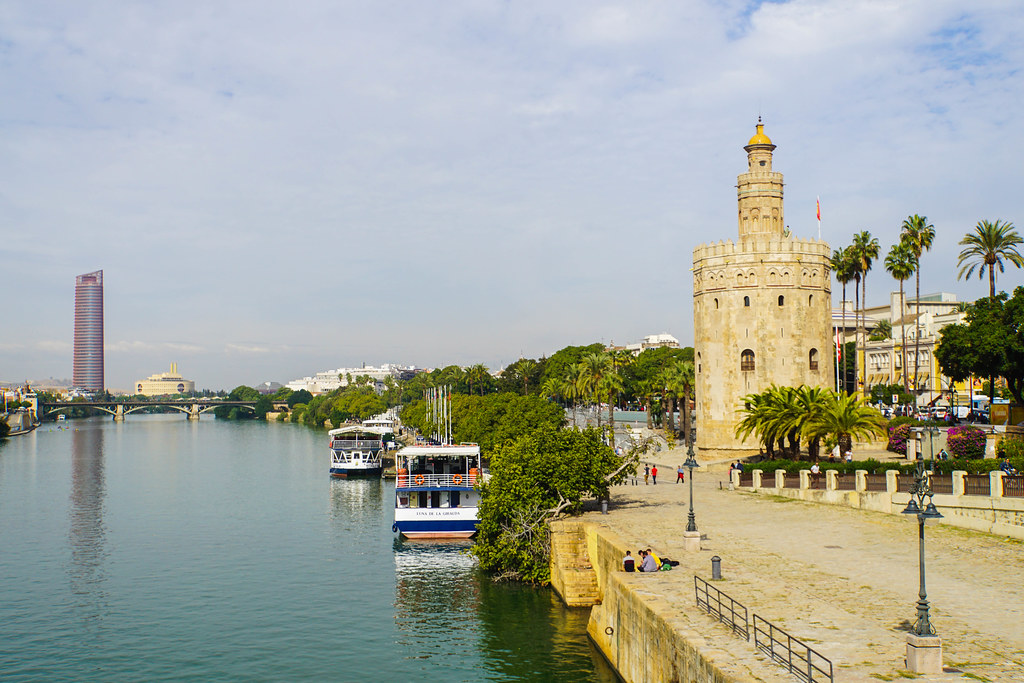 The Torre del Oro is a military watchtower along the Guadalquivir river. It was built by the Almohad Caliphate in the 13th century, in order to control access to Seville, but was also used as a prison during the Middle Ages. The dodecagonal tower has three levels, all built at various times. It is a nautical museum of sorts, with displays of navigational instruments, historical documents, and nautical charts.

Take a Walk Around Triana Neighborhood 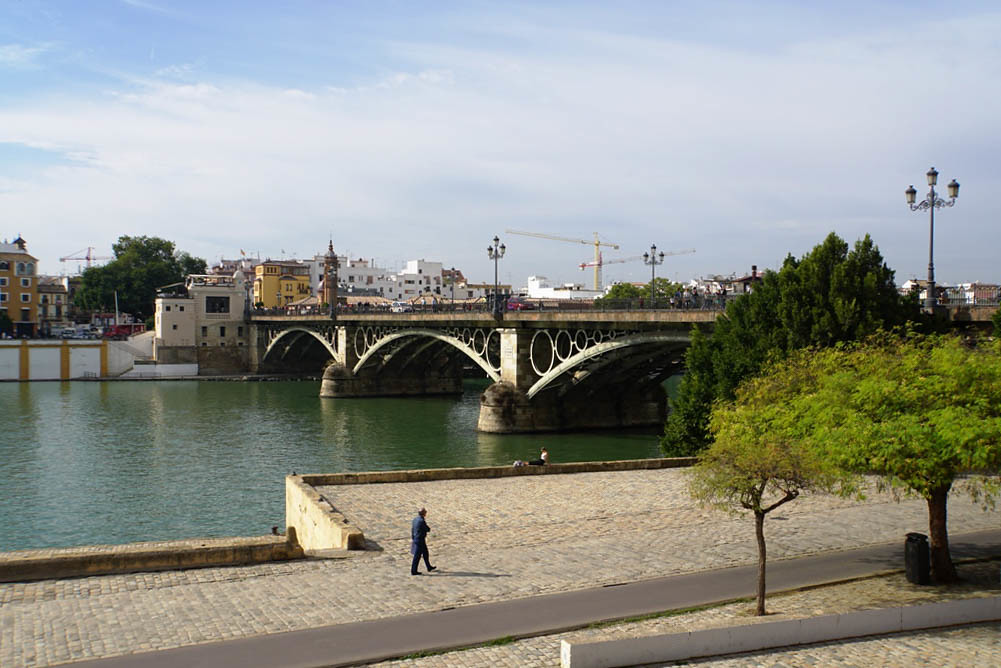 Triana is a neighbourhood on the west bank of the river, historically separate from the main city and located on a peninsula between two branches of the river. It is a very traditional neighbourhood with a strong pottery and tile industry and a vibrant flamenco culture. Triana is connected to Seville by the Isabel II bridge, at the foot of which is the Triana Market and the Castillo de San Jorge ruins. There are a lot of unique buildings and memorials in Triana and its well worth exploring. 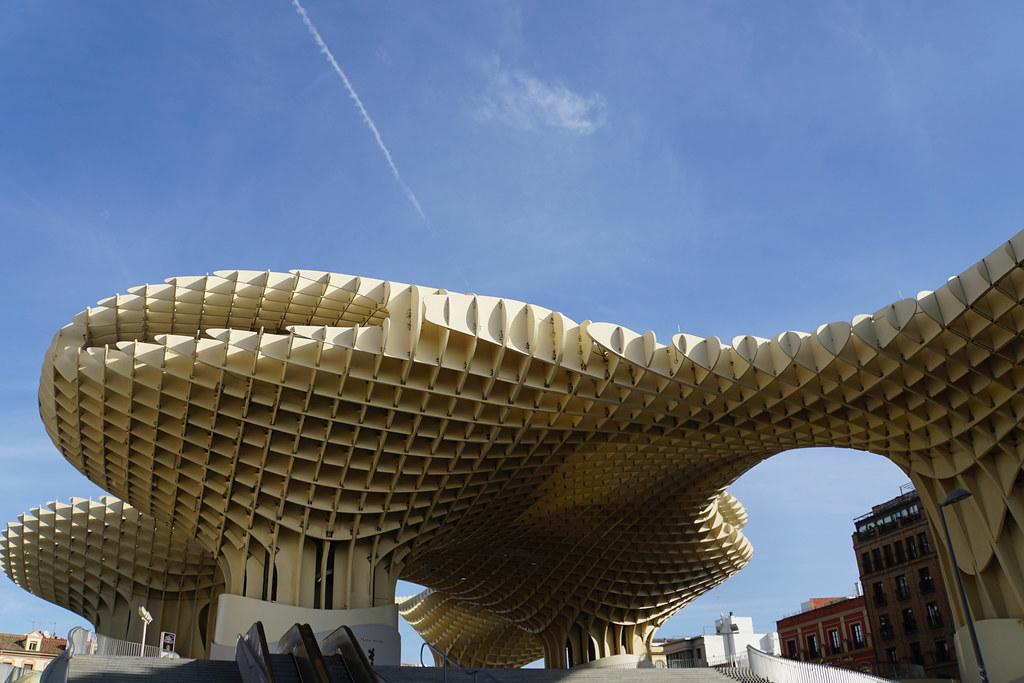 The Metropol Parasol, popularly known as Las Setas, or the Mushrooms of the Incarnation, is a wooden structure and viewpoint in the Plaza de la Encarnacion. It was designed by German architect Jurgen Mayer, and consists of six mushroom-shaped (hence the name) umbrellas. The shape and design was inspired by the arches of Seville’s cathedral. There is a tapas restaurant and event space inside the central parasols, as well as a panoramic route through the upper levels. At the tapas restaurant you can try some of Andalucia’s classics such as boquerones al limon, boquerones en vinagre, gambas pil pil or Spanish tostada. The mushrooms shade much of the square, as well as the Mercado de la Encarnacion. In the basement, visitors can explore the Antiquarium Museum, which displays local archaeological remains. It is one of the best things to do in Seville, and you shouldn’t miss it. It’s so unique when you compare it with the rest of the architecture of the city. 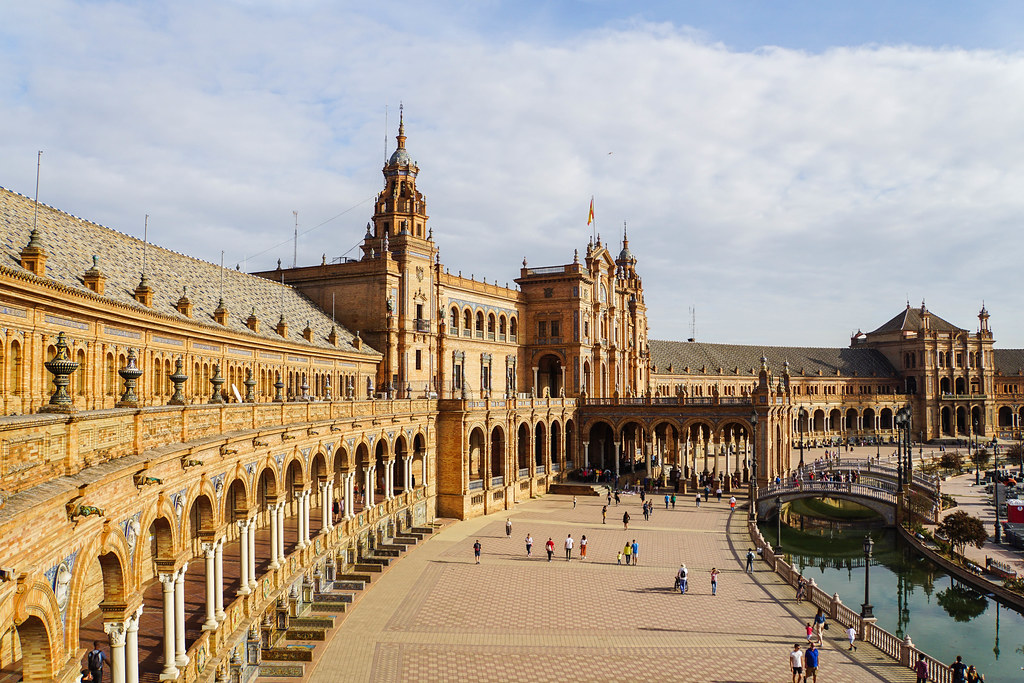 The Plaza de Espana is located in Maria Luisa Park, and built specifically for the 1929 Exposicion Ibero-Americana. It was designed by Anibal Gonzalez and showcased Spain’s industry and technology during the exposition. It is a mix of Art Deco, Renaissance Revival, Baroque Revival, and Neo-Mudejar styles. There are small alcoves around the plaza that represent the provinces of Spain, which today have turned into small free little libraries with guidebooks for the various provinces. 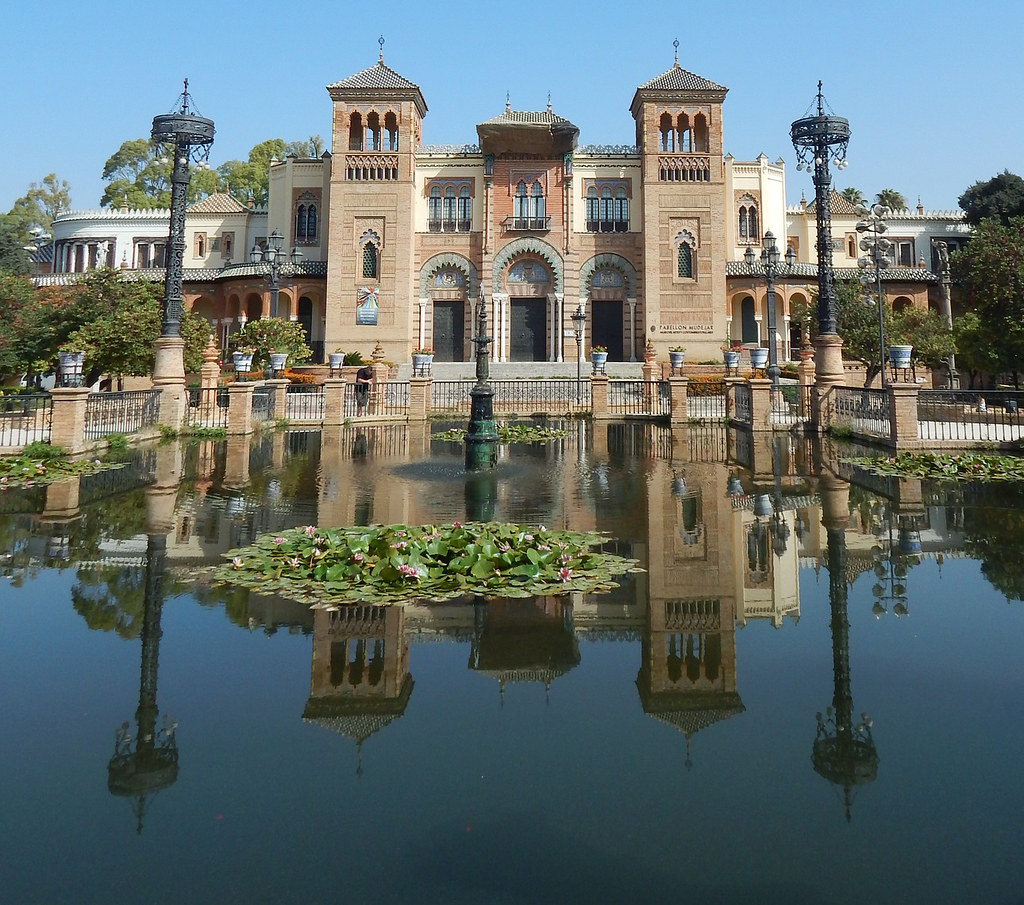 The Plaza de America is also located in Maria Luisa Park, and was also built specifically for the 1929 Ibero-American Exposition. Notable pieces of art and sculpture in the plaza and surrounding gardens include two roundels – the “Miguel de Cervantes” and “Rodriguez Marin,” which are the two most representative of his work. In the middle of the square, a small pond sits surrounded by pillars with light balloons. It is flanked by the Museum of Popular Arts, the Archaeological Museum, and the Royal Pavilion, all of which are also designed by Anial Gonzalez for the exposition, and are all constructed of different architectural styles.

There are so many things to do in Seville, this world-class city. From the winding back alleys of the old Jewish Santa Cruz neighbourhood to the vast plazas built in the early 20th century and the Moorish palace, it’s a city that invites you to stay awhile and get to know it. The history and culture in Seville are unlike any other. Its history as a Moorish capital, its importance during the Middle Ages as a trade centre, and its role in the growth of the famous flamenco all contribute to its modern day style.

The city’s many UNESCO World Heritage Sites showcase the rich history of Seville and Andalucia, with a focus on the Moorish caliphate and the Crusades. Seville is a truly modern city, though, with plenty of amazing tapas restaurants, bars, and flamenco stages. Be sure to include Seville on your next trip to Southern Spain.

Author’s Bio: Chrysoula is a travel blogger at Historic European Castles where she shares her journey of discovering historical castles, palaces and forts around the world.

5 thoughts on “Top Things to Do in Seville, Spain”